Chris Maddocks is very active in the dementia community. During Pride Month, Chris talks about the challenges specific to her sexuality, as well as the experiences of other LGBTQ+ people affected by dementia.

I’m Chris Maddocks. I’m 65 years old. I live in Eastbourne. I’m a retired police officer. I enjoy beach fishing, even though I don’t catch much, I’ve recently taken up online art classes, and I love to potter in my garden. What else can I tell you about me?

I live with dementia. I was diagnosed with vascular dementia five years ago and since I’ve added Parkinson’s disease and dementia with Lewy bodies to my diagnoses.

I’m in a civil partnership with my partner Heather. I moved in with her after I was diagnosed with dementia. I couldn’t believe that she would want to care for me. I’m amazed that she chose to take this on with me.

Since my diagnosis, I’ve been working to raise awareness of dementia and young-onset dementia, and also to raise the profile of LGBTQ+ issues in the dementia community.​

I’ve personally experienced discrimination within the medical community. I go to appointments with Heather and they’ll say "who’s this?", and I say "this is my partner" and then there’s a strange silence, but you wouldn’t get that if it was a heterosexual partner.

I went to the nurse to get a flu jab and said I’d like to make an appointment for my partner and they said "what’s his name?".

People are too ready to make assumptions.

Because I give a lot of talks, I’m told a lot of stories that highlight some of the challenges that people who identify as LGBT+ face. A transgender man told me he has to have injections and other medication such as hormones that he takes regularly. He has a partner, but he said "What if I was on my own, what if I forgot?"

A lot of LGBTQ+ people with dementia are living on their own and might be ostracized by family, so that’s a real issue.

Your rights as an LGBTQ+ person with dementia

The law protects your rights as an LGBTQ+ person – to equal treatment, to not be discriminated against, and to privacy. Read about your rights and what to do if they are not being respected.

Another issue for older gay people is that as their memories regress they may forget who they have told about their sexuality, or they may become fearful about people knowing, even if they have been out for years.

It’s not that many years ago when it was illegal to be a gay man, and there can even be a fear of going to jail.

For people who have transitioned from one sex to the other, what if they don’t remember? Or what if they aren’t accepted? I met a woman who lives in a care home and her family went in and said, "he’s a man so dress him in a man’s clothes".

I heard a story from a nurse about an elderly lady in hospital who was very poorly and almost died, but she had no visitors the whole time she was there. When she was being discharged the nurse took her home and a little old lady met them at the door who turned out to be her partner.

She hadn’t visited because she was worried about the repercussions. There was a fear of not being treated fairly, so all that time the woman was alone in the hospital.

It’s very difficult for people with young-onset dementia too. When I was 60, I was referred to an elderly care unit.

People say "You don’t look like you have dementia". At one talk I gave when I said I have dementia, someone said "You can’t, you look normal". When people think about dementia they always think about the later stages.

Accepting who you are

I never came out to my parents, and some people still don’t know, although if they asked me I’d be open about it. At the end of the day, I’m at a stage in my life that 'this is me, this is who I am' and Heather is my partner.

It’s taken 30 years to accept that.

I’ve had to prove myself all my life. I joined the police in 1978 and I was a token woman and I had to prove myself to get into places like the Criminal Investigations Department (CID). But the older I’ve grown the more I’ve thought I have to stick up for myself and other people. 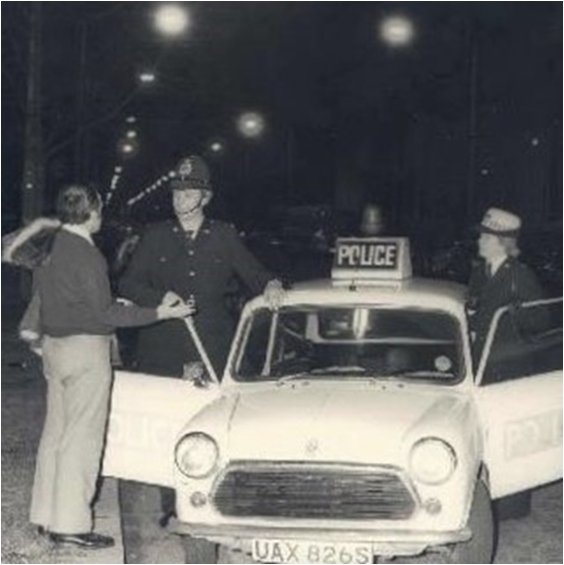 Living as an LGBTQ+ person with dementia

The main advice that I would give to an LGBTQ+ person diagnosed with dementia is to make sure you write a will and complete and register a lasting power of attorney.

An awful lot of people don’t get their affairs in order, but it’s particularly important for those of us who identify as LGBTQ+ and living with dementia.

Because I don’t have children my estate would have automatically gone to my brother and sister, so this was really important to me.

Heather and I entered a civil partnership because we love each other, but also so that Heather could stay in the house if I have to go into a care home.

Planning ahead as an LGBTQ+ person with dementia

Advice and practical tips for planning ahead as an LGBTQ+ person living with dementia.

It’s also important that anyone with dementia has a care plan with their GP outlining their wishes. Dementia is very different from any other life-limiting terminal illness because nobody knows how long we have and how quickly the dementia is going to progress.

For me, quality of life is when you recognise your loved ones.

It’s something you have to think about and work out what you want. My other advice to people would be to make contact with Alzheimer’s Society. Everybody is treated as equal – it doesn’t matter what race you are, what religion, what sexuality. They were a lifeline for me.

Peer support is really important too. I belong to lots of groups and we provide support to each other. One I find really helpful is the Open Doors London Dementia Café and Speak Out Dementia group, which is a safe space to talk. DEEP has also been really helpful - it's for people living with dementia and has about 80 groups around the UK.

Are you an LGBTQ+ person living with dementia?

Your article is great. I am writing a paper for the group of diversional therapists I work with. It is a paper on sexual diversity in rest homes and looks at designing programs etc. This has been an amazing journey for me and I thank you for writing your article. As you say, see the person not the sexuality!
Thank you. Sue.

Great article. You shouldn't be treated any different at all because you are in a gay relationship. It just goes to show that there are still bridges to build. I have a gay friend and when she was younger she used to say her partner was her sister and they shared a house together- otherwise there would be a lot of hostility from the neighbours. All the best to you and well done for raising awareness of dementia within your community and wider society.