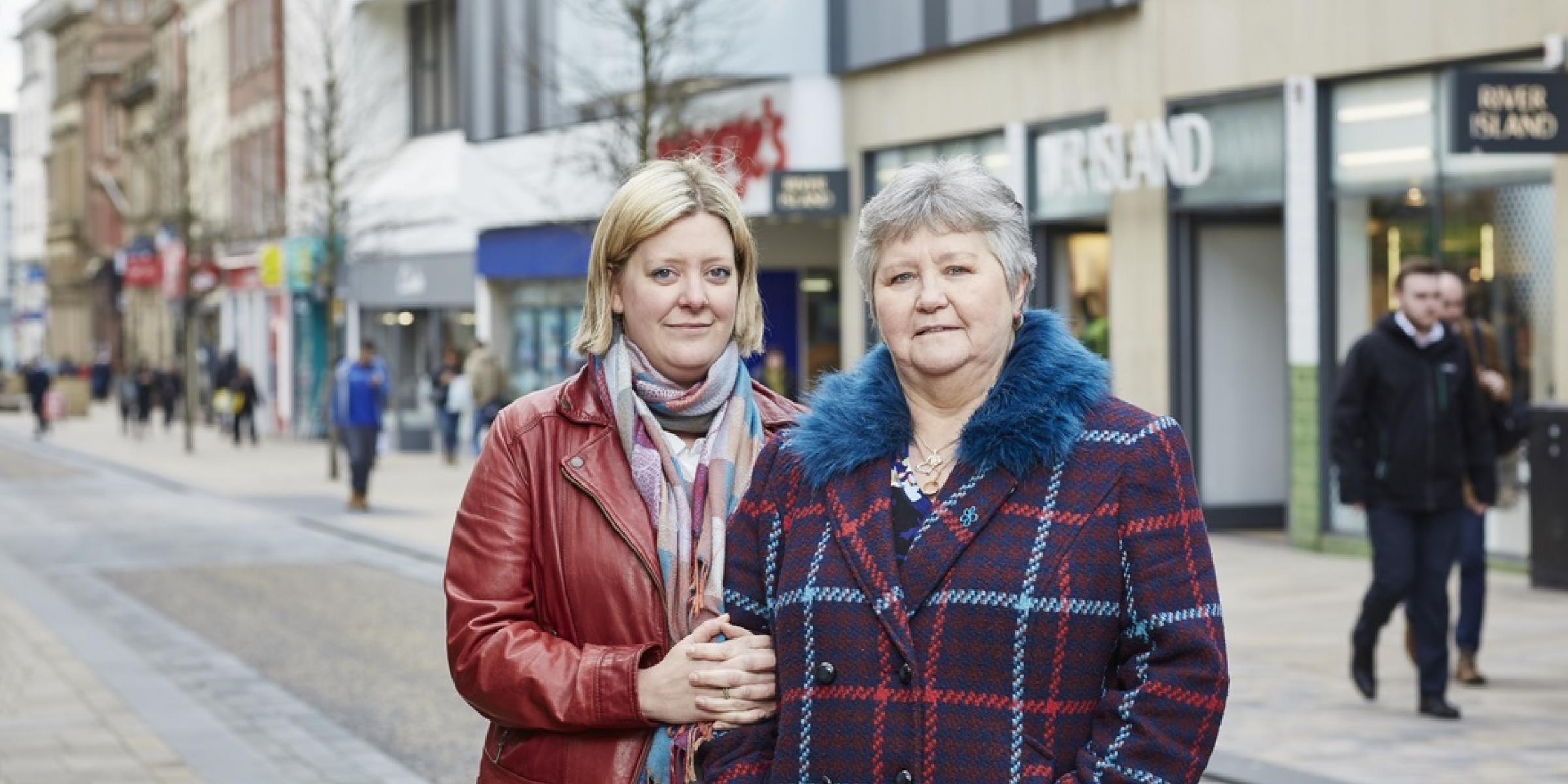 Information
What do the different pin badges for dementia mean?
Blog

What does the blue flower badge represent?

The flower is a forget-me-not, a small blue flower that represents remembrance and is long-associated with dementia.

People with dementia may experience memory loss, among other symptoms. This makes the forget-me-not the perfect flower to represent our cause.

The blue flower pin is a symbol for anyone who wants to unite against dementia, raise awareness and support people affected by the condition.

There are a few different versions of the forget-me-not badge. We have a few available in our shop. 100 per cent of our shop profits go towards helping fight dementia.

Why do people wear a forget-me-not pin badge?

Anyone can wear our blue forget-me-not pin badge to show their support for Alzheimer’s Society. Many organisations have flowers, ribbons and other symbols to represent their charity.

A person might wear a forget-me-not badge because a family member or loved one has dementia, or they want to help raise awareness.

It’s best not to make assumptions about why someone might be wearing the pin.

Is it true that wearing a forget-me-not pin badge means you have dementia?

No, that is not true.

The forget-me-not badge is for anyone to wear to show their support for people affected dementia.

It is a common misconception that the badges are to help identify people living with dementia in public.

If someone is misinformed, it might be helpful to make them aware of this.

People living with dementia can sometimes face stigma and exploitation, which may put them at risk when out in public. If there’s the misconception that only people with dementia wear this badge, this could increase the risk of making them vulnerable.

If a person with dementia wants a discreet way to let others know about their diagnosis while out and about, we have free helpcards available.

What does the Dementia Friend badge mean?

Dementia Friends is a social movement committed to changing how people see dementia.

A Dementia Friend is somebody that learns about dementia so they can help their community. They may choose to wear the badge so they can show support for the movement, or to help others who may need it.

I’ve lost my Dementia Friends badge – can I have a replacement?

If you have lost your Dementia Friends badge, please email your details to [email protected]. The Dementia Friends team will do their best to arrange for a replacement to be sent out to you.

Do you have a badge like one of these? Send us a photo of you wearing it with the hashtag #ForgetMeNotBadge and tell us why you wear yours

I am 74 and have had Alzheimer's Disease for about four years. It is now becoming more of a problem, especially when I am out and about. Recently I had to make several train journeys in and out of London, and these were tricky. I got pretty anxious, especially when there were timetable and platform changes plus large crowds of people in a hurry.

In situations like that I would really like to be able to display some sort of sign that I can't be hurried, so please bear with me if I don't know which way to go.

The Alz Soc forget-me-not badge is too small for that purpose. I'd like a large and obvious badge that would become recognised nationally as an indication that its wearer needs a bit more time than most people.

I reckon that such a badge could be very handy for a lot of people with a wide range of health issues, including poor sight and/or hearing, limited mobility and issues such as Alzheimer's.

Unlike the Alzheimer's Society's tiny forget-me-not, my badge would be big, bright and cheery. It would ideally use a phrase like HANG ABOUT, I'M AN OLD CODGER! - but I do realise that not everyone would want to wear that particular label! It's also a bit too long, unfortunately. WHAT'S THE RUSH? Is another phrase that might work.

Whatever the badge says, I think it could be very useful to a lot of people who can't be hurried, not only old dodderers like me. Also, if it has the right kind of ring to it, it might replace a few scowls with smiles!

I suggest that the Alzheimer's Society could convene a meeting of interested parties to discuss how such a scheme could be organised. It would of course - need national publicity and widespread support if is to be effective.

I reckon a recognisable and amusing badge would make a lot of our travelling - and many other situations - a lot less stressful!

Hello, where can I get a new pin from. My original one broke.
Thank you

I am a demeter friend. Is there a dementia friends window sticker?
That I can display on my shop window?

I wonder about the intelligence of people today. If someone wears a daffodil badge does it mean they have cancer, or an orange MS wristband does that mean they have MS, how about a poppy, does that mean they are a forces veteran or even a family member.
No, of course not. Wearing a badge is more likely to mean someone supports a cause than that they are a premiere league footballer.
It may surprise you to know, if you weren't already aware, that all these thousands of people running round a town, on match day, wearing badges for Manchester United, are NOT Manchester United players, they only SUPPORT the team .
Wearing badges to show membership of a group is now a rarity.

Take the view that anyone wearing a badge is a supporter of a group, unless they have 'I have' stated on the badge. Like those badges that say 'I am six' .

Very proud as a Champion to have my '2 million' badge. Looking forward to hitting 3 million and hopefully a new badge! :-)

I would love to wear the badge I haven't got one

I've never received a badge. Was I supposed to when I joined this? I would like to wear one, please tell me how I get one.

I applied for my dementia badge and I never did receive it ,so I can't wear it ,my mum died of alzimers/ dementia, she suffered for 11 years

If you have lost your Dementia Friends badge, please email your details to [email protected]. The Dementia Friends team will do their best to arrange for a replacement to be sent out to you.

We hope this helps!

Where are Dementia/forget me not badges available to buy?

All staff at Chesterfield Care Group wear our badges with pride- we wear the forget me not brooches. Chesterfield Care Group run a walking and activity group in the chesterfield and surrounding areas for individuals with a diagnosis of Dementia- this badge is a great way to show the general public that if something unusual happens when we are out walking they understand without staff having to explain respecting our service users dignity 😃

I joined dementia friends along time ago but ive never received a badge.

We are a Care company currently becoming Dementia Friendly. I would like to make a donation and also receive some of the metal badges for my senior carers. Is there a way I can do this?

How do you become a dementia champion?

Thanks for getting in touch. You can find details on the Dementia Friends website here: https://www.dementiafriends.org.uk/WEBArticle?page=what-is-a-champion

I have lost a lot of the pin badges for one reason or another. I would like to see the alternative of brooch fastening badges available and would be happy to pay the extra cost as I am sure others would too. I am also a Dementia Friend and volunteer with 3 groups and again this pin badge would be better with a brooch fitting. Again I am sure there are many of us that would pay for them.

I havebeen involved for over 15 years and I have never heard of anything like this! How can I be sure that this is really from the Alzheimer Society? I am very skeptical. Please send me a message. Thank you, Claudine Coughlin

For manyyears this flower has repeseted Masonically a we will not forget Brethren.

On the big debate on whether to generally refer to people diagnosed with dementia as sufferers. I look at it this way I would not like to be looked at as sufferer unless I am actually suffering at a particular time. Eg I may live with depression but I am not always ' suffereing' from depression. It's the same with dementia. If you are constantly being referred to as a sufferer it really desempowers you and puts a negative label which affects you negatively. That said, I agree we should recognise good intentions.

I work in a dementia home as a carer and have done for seven years. I would wear a dementia friend badge with pride if I had one.