We hear from a carer who wants to reach out to LGBT people who have been affected by dementia. 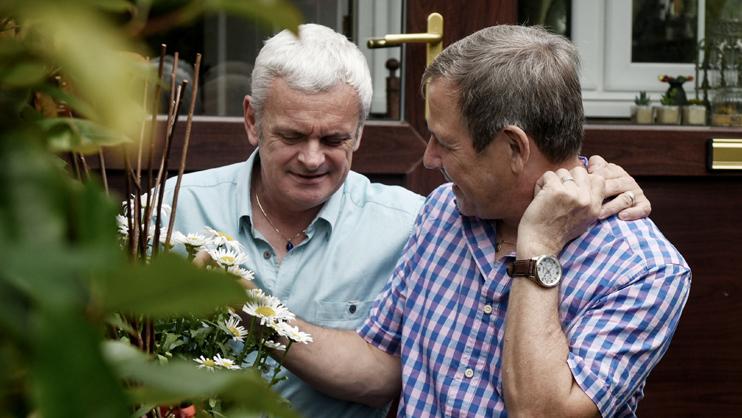 'People assume that when they retire life will be under their control, but this is the opposite.'

Mike Parish cares for husband Tom, his partner of over 40 years, who has a working diagnosis of HIV-associated neurocognitive disorder (HAND).

Mike gave up work in 2014 to support Tom, and he now wants to reach out to other lesbian, gay, bisexual and trans (LGBT) people who have been affected by dementia.

Mike Parish and Tom Hughes, now both 62, met in 1975 and settled in London. Tom had moved down from Glasgow after a spell in the Merchant Navy.

They enjoyed cycling, socialising and exploring France on holiday, and Tom retains his interest in fossils and meteorites, which he collects and catalogues.

Diagnosed with HIV in 2003, Tom began to experience mild memory problems five years later. He also found it more difficult to understand new tasks. By 2011, these symptoms were affecting his work as a pensions adviser, forcing him to retire on medical grounds.

'I thought it was his employer being difficult - I didn't know his abilities were being eroded by the dementia,' says Mike.

Mike admits to experiencing some denial over Tom's condition.

'I would come home at 5.30pm and he was only just finishing his lunch, but your brain doesn't want it to be something unpleasant,' he says.

A 'big trigger' came in 2014, when the couple were out at a restaurant. Mike returned from the toilet to find that Tom had only ordered food for himself rather than both of them.

'I asked him about it but he just looked at me,' says Mike. 'That was the absolute conscious turning point for me - I was shaken to the core.

'It's rare enough that it's too early to have a cast-iron plan for prognosis, treatment and therapy,' says Mike.

'I knew this was something different to what we'd experienced up until then.'

Almost two years ago, Tom was diagnosed with HAND. This is a condition where HIV causes problems in the brain that can affect memory, concentration and decision-making.

'It's rare enough that it's too early to have a cast-iron plan for prognosis, treatment and therapy,' says Mike.

'There's not enough good research or information to give you enough of a handle to start planning your lives around.' 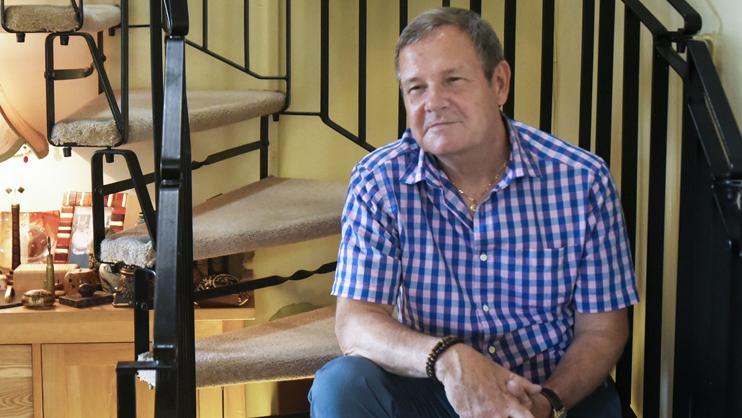 Nothing to hide: Welcome support amid some difficult days 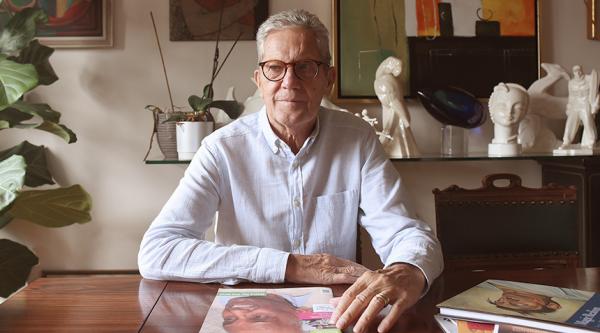 Real stories
Meet Elmar, a man with dementia who is benefitting from a group where he knows he's not being judged.
0

Mike has accompanied Tom to countless medical appointments, and he wonders how people get what they need without the support of a partner.

'Do they have an advocate? That's the issue,' he says.

'Every time we meet a health professional, I act as a go-between for all of them.

'There's also lasting power of attorney, a will, benefits - it takes an intense amount of time.'

In late 2014, Mike retired from his job with the fire brigade, training people in emergency incident management, to care for Tom full time, a role he describes as 'living the life of two people'.

He says that Tom's cognitive abilities fluctuate, meaning every day is different.

'Tom needs help with things like getting dressed and brushing his teeth, but then sometimes he'll go and switch off something that I didn't even realise I'd left on,' says Mike.

Mike has found caring for his husband mostly rewarding, though sometimes confusing and frustrating.

'When I get angry, I have to check myself. Is it because my retirement isn't what I expected it to be? Am I angry at my own circumstances? I suppose yes I am,' he says.

'Am I angry Tom has an illness? Yes of course.

'But when I'm frustrated at him, I know it's not him - it's not deliberate.'

Mike is in two minds about taking a break from his caring duties.

Mike is determined to keep Tom in his own home.

'If he ever did have to go into care, how can I be sure that they understand and love him as much as I do?' he says.

'I'm resisting letting go, because who can substitute for me, the person he's lived with for 40 years?'

Mike says that being gay adds an extra layer of concern when considering residential care.

'Over the years Tom's been beaten up and I've been chased down the street. Then in the early 80s, the HIV issue came along. We know what it's like to be on the rough end of things,' he says.

'When you've been in a threatening environment, you hold onto it for all of your life - you learn but still feel at risk.

'So do we go into a care home as the only gay person and think, "Is it safe to come out? Are staff gay friendly? Will they understand the relationship?"

'That's the fear we're confronted with.'

Mike and Tom are among the first members of Rainbow Café, a new memory café in London run by the charity Opening Doors London. The group offers support, activities and information to LGBT people with dementia and carers.

'For the first time in two-and-a-half years of looking, I've met other couples in the same situation,' says Mike.

'Out of 10 million people in London - where are they all? People are lost in the system.

'It's my personal mission to find out where these people are and how we can communicate.' 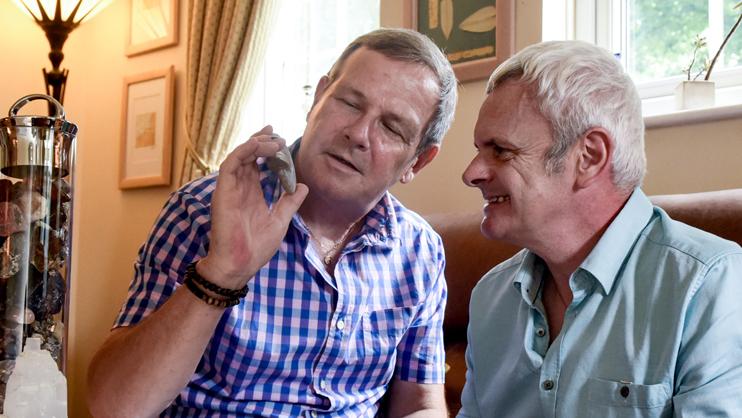 Services and care settings for LGBTQ+ people with dementia

Advice and practical tips for supporting LGBTQ+ people with dementia to access services and care settings.

Mike believes it's vital that LGBT people can access support that feels safe and relevant to them.

'If I was shy and retiring, which I used to be, I might find it really challenging to go into a room of 30 or 40 people and introduce us to a group as the only gay couple,' he says.

'Other people may not say they're gay or may not turn up - which is why a specific gay group is so important, at least for someone initially.'

'People could make our lives difficult, which is an issue, but if we don't do this then who is going to?' says Mike.

Mike and Tom have been raising awareness of LGBT dementia issues through a series of talks, presentations and media interviews.

Mike hopes that going public with their story will generate something positive from an otherwise difficult situation, while he also hopes the work will serve as a legacy for Tom.

'People could make our lives difficult, which is an issue, but if we don't do this then who is going to?' he says.

'Sometimes you've got to stand up in the face of rejection and hurt in order to change things.

'At the start of anything that brings change, the only way is to step into the light.'

LGBTQ+
Back to top

Well done for being so brave and telling your stories. It saddens me to think you have to still deal with discrimination in 2022. Please remember to look after yourself while caring for your partner as without you his life would be more reliant on others. Us professionals need to get better at putting the jigsaw together so that carers and their loved ones get all the support they can by signposting and knowing what is in our communities.

Joanne, thank you so much for your lovely and supportive message.

I am hopeful that things will change and that LGBTQI +people will feel more confident in coming forward identifying themselves as such and receiving non-judgemental and loving care.

For those experiencing cognitive decline, with powerful memories of a time in their past when a minority sexual identity could lead to trouble with the police, families, friends or work, this can be especially harrowing and difficult to deal with.

Thank you for this story because it mirrors my own almost completely when my wonderful husband and partner of 43 years, Michael, developed Alzheimer's, the fear, the denial, the holding on, delaying the inevitable when life together became so very difficult and distressing, the worry about how people in the Care Home would react to us and how that might affect their treatment of Michael. After the first dreadful Care Home (never judge on glossy brochures and promises) finding, not the best as far as appearances, but wonderful care and genuine love to both of us, a new family. I think our closeness, our love for each other (Michael knew me and loved me to the end) opened the eyes of many people. Now the next journey begins; for Michael, who knows, for me, the overwhelming grief and loss. However, I am so grateful that you have opened a window on what so many same-sex couples (and individuals) have gone through and the many more who sadly will have to face. 💔

Jimmy, first of all thank you so much for your heartfelt reply and and telling your beautiful and deeply touching story here. I am so pleased that you were able to find somewhere where you could feel confident that your wonderful husband could be cared for in a loving and understanding environment and where your relationship was recognised and where in the both of you were supported in that that is the least we should expect but it is wonderful when it is given.

I’m delighted to say that Alzheimer’s Society have taken huge strides to engage with organisations and develop projects a supporting LGBTQI+ people living with or caring for someone with dementia. There is work being done by Number of other organisations with the aim of improving understanding, knowledge and awareness of our community and some of the enormous anxieties we have when dealing with formal care and health environments.

As you indicated, it’s enough to have to deal with such a devastating condition but adding anxieties about acceptance and understanding and experiences of living in less accepting times adds a huge extra burden to the entire experience.

It sounds also that your obvious love for one another was clear to others and you have paved the way for others to have a positive experience.