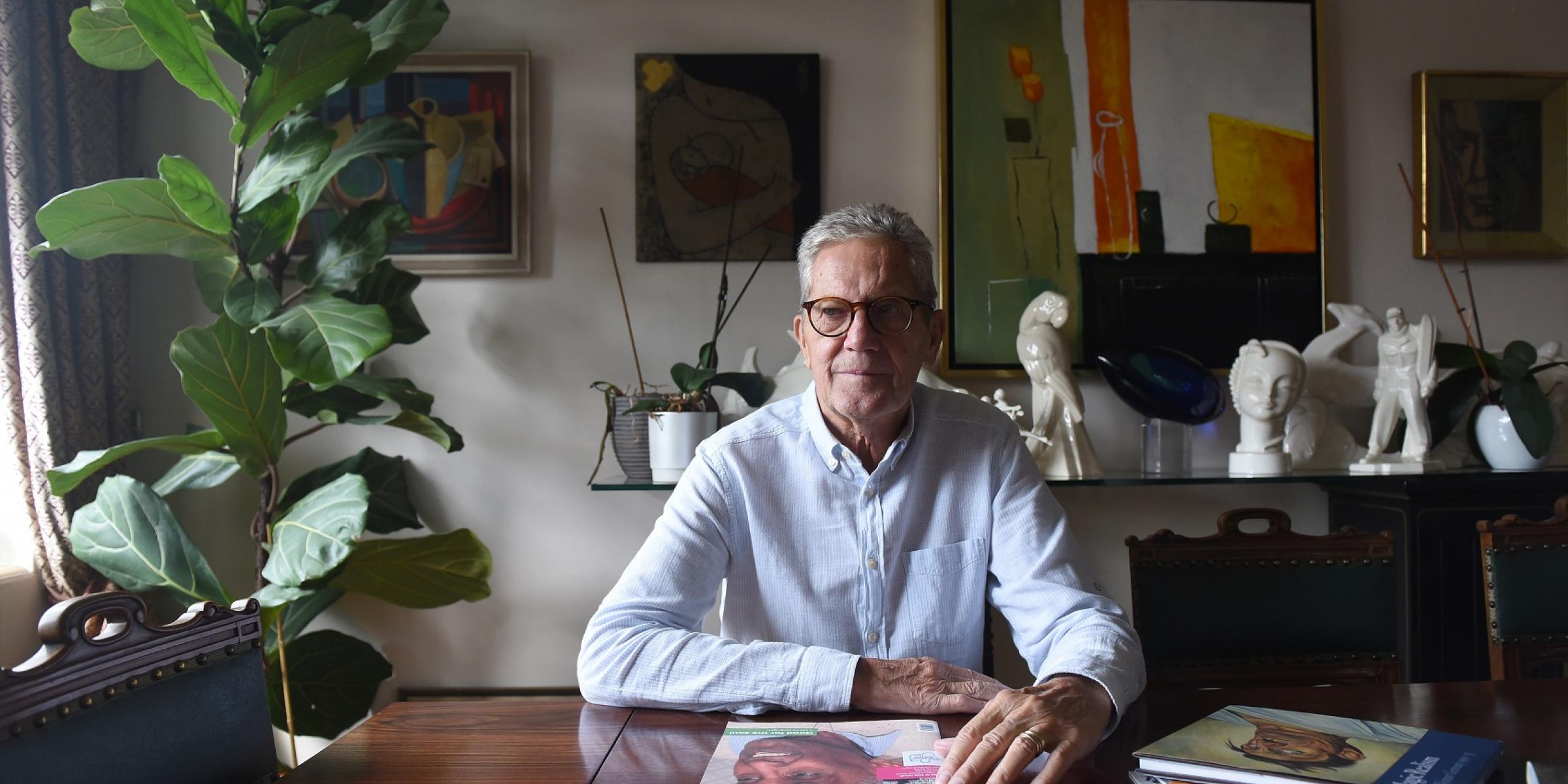 Real stories
Nothing to hide: Welcome support amid some difficult days
Dementia together magazine: Oct/Nov 18

Meet Elmar, a man with dementia who is benefitting from a group where he knows he's not being judged.

Elmar, who has Alzheimer’s, has experienced some very dark and difficult days, and some of what he has to say about the future is hard for his partner, David, and others to hear.

Dementia affects everybody differently, and some services might not meet everyone’s specific needs.

A specialist memory café is providing a safe space and much-needed support for both Elmar and David.

Press the orange play button to hear this story in Elmar's own words:

Having worked as a TV and radio engineer in his native Austria, Elmar came to England in the mid-1960s, aged 22, getting a job as a waiter in south-west London.

‘At that time the only way I could get entrance was to work in a hotel or restaurant, so I had no other choice,’ he says.

‘I thought my English was pretty good but the customer would start talking and I couldn’t answer, so they always had to call somebody else!’

This career path turned out to be a good one for Elmar, now 74.

He worked his way up, eventually becoming sales and marketing director for a number of international hotel companies.

‘I travelled worldwide, going to meetings and giving presentations,’ he says. ‘I spent more time away and on planes than actually being in London.’

By the time Elmar retired aged 62 in the mid-2000s, he had met David, a businessman and consultant.

They had a civil partnership a couple of years later and live in Putney, in south-west London.

Some research does suggest traumatic brain injuries may increase the risk of dementia. However, there is still much more research to be done to understand this complex issue, particularly in relation to contact sports like football (soccer) and rugby.

Elmar, a big fan of skiing, was in an induced coma for a week after a serious accident around 10 years ago. After Elmar came out of hospital, David noticed a change in his mental abilities.

He says Elmar became slower at recalling information, and he believes the accident or medication probably played a part.

‘It was difficult for us because we didn’t know what the problem was, so I used to think it was just Elmar being a bit lazy – asking me for the answer without having to think about it,’ says David. ‘It was quite stressful at times for both of us.’

Elmar had tests over a number of years before being diagnosed with Alzheimer’s disease in May 2016.

‘It started off very lightly – I possibly couldn’t think of something immediately but it didn’t take me that long,’ says Elmar.  ‘Now I’m really bad, particularly with names, even my dearest friends’.

‘I’ve got a little book and I write down names and what connection they are. If I’m really desperate, I have a look.

‘If you asked me what I ate yesterday for lunch or what I did, it takes a while, if I remember it at all. I just don’t have that. It’s irritating.’

Elmar has also become less outgoing, which he puts down to difficulties with word finding and language.

‘Sometimes I’m not as fluent when I speak to strangers,’ he says.

'I have times when I just cannot think of a word in English. Sometimes it comes up in German but I can’t use it because nobody else knows what it is!’

Supporting a person with dementia who has depression, anxiety or apathy

This page looks at the effects of depression, anxiety and apathy on a person with dementia, and suggests ways to support people with these conditions.

Elmar has chosen to be open about his dementia with friends.

‘I decided that there’s no point pretending that everything is fine and hunky dory, so I’ve always told everybody what the situation is – there’s nothing to hide,’ he says.

‘I have downers, depressive days. There doesn’t necessarily have to be a reason and it’s not predictable,' says Elmar.

He is also candid about his difficulties coping with the condition.

‘I have downers, depressive days,’ he says. ‘There doesn’t necessarily have to be a reason and it’s not predictable.

‘My mother and sister, who both had dementia, were in a terrible condition when they finally left,’ he adds.

Grappling with what the future may hold, Elmar shares a distinctly personal decision that he is prepared to end his own life at some point, which David understandably finds difficult.

Although anyone’s views may change over time, Elmar speaks unequivocally.

‘I have decided that I will not let myself get to the stage where I’m totally out of my personality, can’t talk to anybody, don’t recognise anybody,’ he says.

‘I will do something to go before then, I’m absolutely firm about it.

‘I used to worry about the whole thing, but I recently came to the conclusion that I’ve had a good time and had a good life, so it’s not an issue.’

David says, ‘I understand what Elmar is saying and the reasons why. At the end of the day, it’s going to be down to him to decide really, when the time is right. But it’s hard – it’s very hard to take at times.’

Alzheimer’s Society campaigns for everyone with dementia to have good quality care, up to and including at the very end of life.

People should be able to plan ahead, and their care should respond to their needs and wishes.

We do not call for changes in the law on assisted dying or euthanasia, and we monitor legal developments to ensure that people with dementia are safeguarded appropriately.

Anyone who wants to talk about things that are getting to them, whether they are feeling suicidal or not, can talk to Samaritans – call 116 123 (free) at any time or email [email protected]

Read about depression and dementia
Advice

Find information and advice on accessing the right kind of support as an LGBT person living with dementia.

After seeking out additional support last year, Elmar and David began attending a local group for people with dementia and carers.

However, they didn’t feel they had much in common with the other members, many of whom had more advanced dementia.

Elmar also says that he didn’t always feel welcome as a gay man with his partner.

‘We went twice and I felt very uncomfortable because of something I heard,’ he says. ‘I’m not saying everyone there was anti, but there were definitely people who were probably not too happy.’

‘The group is well organised and they bring in guest speakers to present on different subjects, which is very interesting,' says Elmar.

Launched last October, the café offers dementia advice and support in an environment where LGBT+ people know they will be welcomed and included.

‘The first time we went, I was impressed with the whole thing,’ says Elmar. ‘It’s well organised and they bring in guest speakers to present on different subjects, which is very interesting.

‘I see a variety of people there with similar problems that I have, although there are big variations.

‘For me it quickly became very important, as it’s of great value and gives a lot of help.’

The group also means a lot to David.

‘We can talk about anything we want, it’s very open,’ he says. ‘You can be yourself and there’s no issue about your sexuality.’

Elmar hopes the group will expand, as he feels it could benefit many others.

David, who is running a half- marathon to raise money for the café, believes that having appropriate services are crucial in encouraging gay people affected by dementia to seek support.

‘There’s a massive population of LGBT+ people out there and I think a lot of the services that are already set up don’t specifically cater for them,’ he says.

‘As the population gets older, there are going to be more gay people going into homes, more gay people needing carers. Staff need to be trained correctly in how to deal with them and the issues they have.’

Although Elmar continues to have difficult days, the café remains a standout source of support.

‘I’d always go there rather than do anything else,’ he says. ‘I think it’s actually one of the best things I can do.’

LGBT+, Low mood and Depression
Back to top