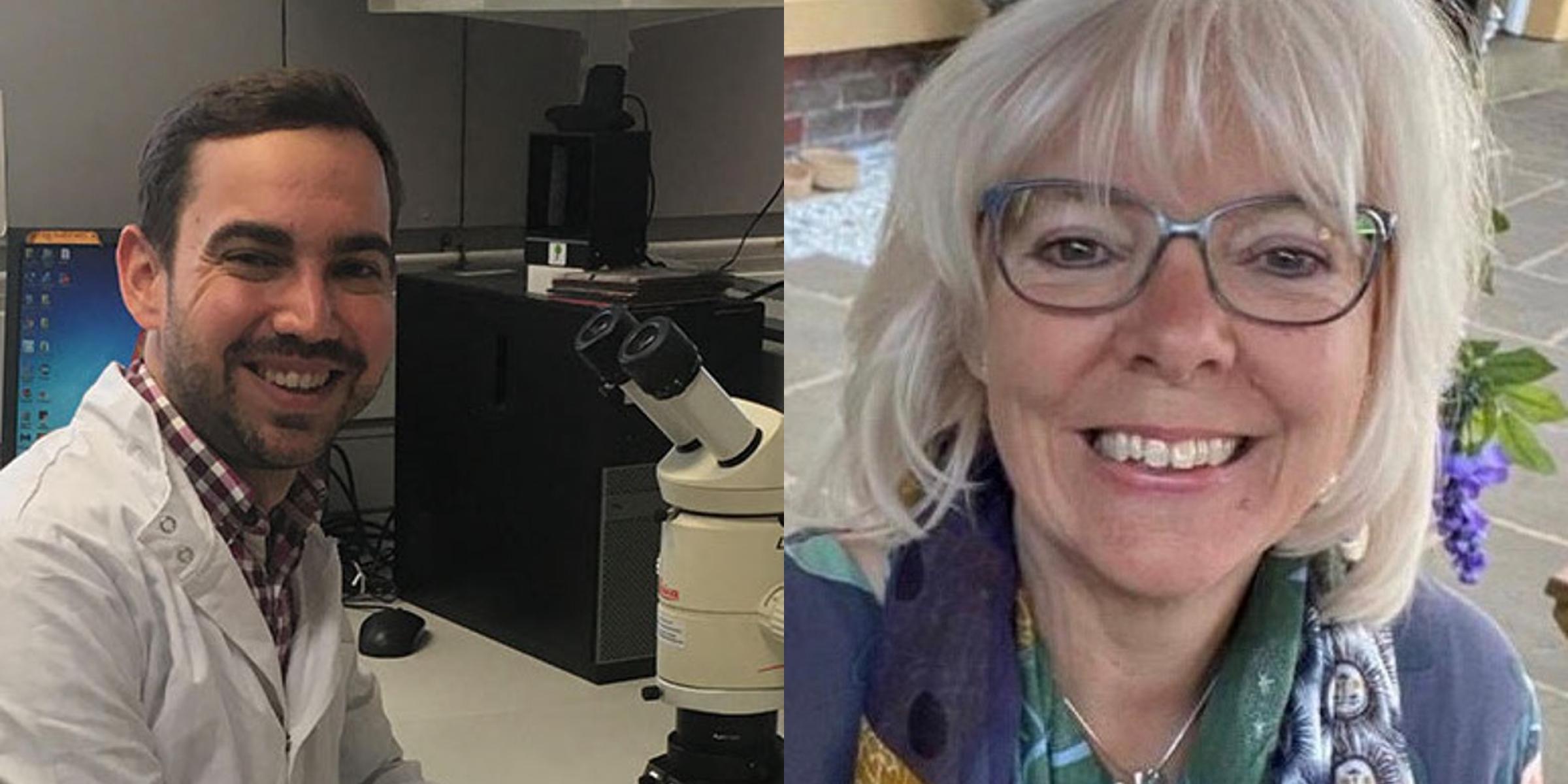 In March 2020, Dr Nathan Woodling and his research team had to discard all their ongoing experiments on Alzheimer’s disease. This was a huge blow to the Alzheimer’s Society-funded researchers, a loss of months’ worth of work by dozens of scientists.

I imagined that we’d be able to restart our experiments in a few weeks. It actually took a year and a half for us to build back up to full-time work in the lab.”

Away from his lab at University College London, Nathan started to work out how to protect his genetic research and make sure that it would still be able to help people affected by Alzheimer’s disease. Jackie Samuell was there (virtually!) to help.

Jackie was a carer for her mother, who had dementia. Now, she is a Research Network Volunteer, ensuring that the voices of people affected by dementia are heard in the research we fund. She monitors several of our research projects, including Nathan’s.

“The pandemic affected Nathan’s project on so many levels,” she said. “Lockdown and social distancing caused major disruption to the experiments. Shipments of resources were delayed."

"He couldn’t go to conferences to share his findings. Nathan quickly worked out ways to continue, but he also had to find ways to supplement his grant funding. He took on a part-time teaching post at the University and collaborated with other researchers, sharing data that would move the field of degenerative brain diseases forward.”

Nathan’s swift actions prevented his work from going to waste, and he’s been able to continue looking for genes that could be targeted by drug treatments in the future. However, like many other dementia researchers, he is now facing a new challenge.

A threat to the future of dementia research

The early stages of a researcher’s career in academia were very difficult even before Covid. Short-term contracts and intense competition for permanent positions mean that researchers early in their career were spending large amounts of time applying for funding - when they would rather have been working on improvements to diagnosis, care and treatment for people with dementia.

When the pandemic struck, everything got worse. A recent report by the All-Party Parliamentary Group (APPG) on Dementia has shown how badly dementia researchers like Nathan have been affected.

“I’m ready to lead my own research group,” said Nathan, “but funding for many new grants was halted during the worst of the pandemic, so the competition for new funding is fierce. I fear that many talented and highly trained dementia researchers will be forced away from research altogether.

It would be a terrible loss to people affected by dementia if all those years of research expertise were gone.”

Investing in the future

In the 2019 General Election, the Conservative Party committed to doubling dementia research funding, investing £1.6bn in dementia research over ten years (the ‘Dementia Moonshot’). This would equate to an additional £83m per year. Although vital for our research community, this has not yet been realised.

On 27 October, Chancellor of the Exchequer Rishi Sunak will announce the Comprehensive Spending Review. This outlines the Government’s spending plans over the next three years.

This is a critical moment for dementia research. We must make sure that the Chancellor recognises the need for greater investment in dementia research. It's especially important for early career researchers like Nathan, who are at risk of being pushed out of the field by forces beyond their control.

That’s why Alzheimer’s Society has launched a Comprehensive Spending Review campaign, calling on the Chancellor to include the government’s manifesto promise to double dementia research funding through the Dementia Moonshot.

Jackie knows first-hand how important research is for people affected by dementia.

I want to see a consistent and adequate funding stream for dementia research in all fields, from prevention to diagnosis to care – and one day, a cure.”

Nathan agrees. “Doubling dementia research funding would show that the UK is serious about discovering the dementia treatments we so desperately need,” he said. “A commitment from the government on this scale would also help early career scientists like me to make good on our own commitments to the fight to end dementia.”

Research, For researchers
Back to top

I have a daughter who was diagnosed with early onset Alzheimer’s aged 49.I was able to look after her with help from her 2 sisters for five years until she became too violent to remain at home.She has just been reviewed and continuous health care funding is no longer going to be funded. We had to appeal to get it and has now been in care for 2years.Doubly incontinent she now spends her time between bed and wheelchair and requires everything to be done for her.She has no speech and has not walked for 12 months.She no longer opens her mouth to be fed and grinds her teeth loudly.We recognise that we are approaching the final stages of this dreadful disease but have been asked if we want to have a peg fitted for feeding.Helen no longer recognises us.This disease needs funding but most of all funding for research.

This type of lobbying takes months not a call for emails one and a half days before the Spending Review.

Thank you for your overview in particular:
I want to see a consistent and adequate funding stream for dementia research in all fields, from prevention to diagnosis to care – and one day, a cure.”
Nathan agrees. “Doubling dementia research funding would show that the UK is serious about discovering the dementia treatments we so desperately need,” he said. “A commitment from the government on this scale would also help early career scientists like me to make good on our own commitments to the fight to end dementia.” My personal interest has been in the long term prevention of the socially difficult behavior changes of the dementia progression which could take much pressure away from Dementia care work.

If only answers could be found to this life changing condition. I cannot understand why the government have not stepped in to help find a cure or help for people. It’s good to know there are scientists that are keen to work and are interested to pursue work to find answers. If only they could find the cause or some answers.
Hope the government keep their word
with the promised funding .