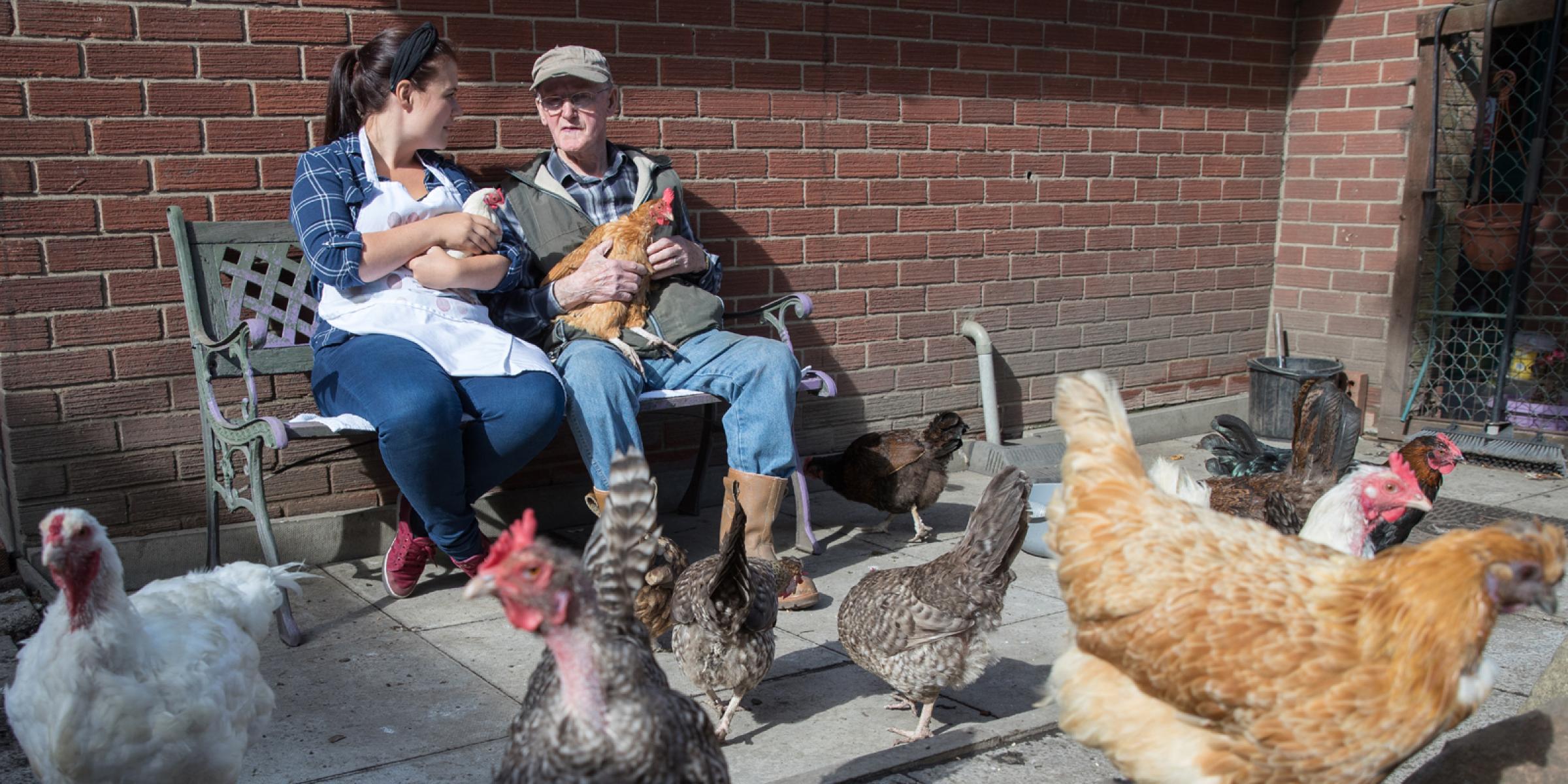 Real stories
Friends through hens: Bringing a community together
Dementia together magazine: Oct/Nov 19

Being with animals can be comforting and stimulating, and they don’t have to be traditional pets.

Wood Green is a sheltered housing scheme in Gateshead that’s home to two very different types of resident – older people and hens. Caring for hens is a big part of people’s lives at Wood Green, and it’s helping to combat loneliness and isolation.

‘We’ve been caring for hens for seven years now,’ says Lynne Walker, the sheltered scheme manager. ‘It’s made a remarkable difference to all the residents, but particularly the men.

‘Before the introduction of the hens, they just didn’t interact with each other. The men have been able to bond around the hens and their care. They would never stand and chat with each other before, but since we’ve introduced a table outside the communal lounge that overlooks the hen pens, that’s all changed.

‘The men will come out and sit and chat together for hours now. In the summer, they gather around and have a drink together. They’re all much more outgoing now.’

HenPower is a project run by Equal Arts, a charity that involves older people in creative activities. The idea of bringing hens into care settings came from people like Owen Turnbull, who lives at Wood Green.

Owen had told staff that he was frustrated as he missed his ‘girls’ – his hens. Lynne contacted Equal Arts and a week later, residents were introduced to hens from a nearby farm for the first time. Since 2012, hens have been a big part of life at Wood Green, and they aren’t alone – there are now 60 HenPower projects across the UK. Through these, professional artists also lead creative sessions to help improve wellbeing.

The hens at Wood Green are looked after by head hen keeper Owen, who enjoyed looking after chickens and hens when he was younger. Owen gets up at 7am every morning to clean out the pens, change the hens’ water and feed them. Wood Green is also home to three hens from a nearby primary school.

‘I look after the hens seven days a week,’ says a proud Owen.

Owen lived at the sheltered scheme with his wife Bell for 14 years. When the hens first arrived, Bell had mild dementia. Bell moved into a care home as her dementia advanced, and she died in February. Owen and Bell had been married for 67 years.

For Owen, caring for the hens gives him a sense of purpose and routine.

‘I look after the hens seven days a week,’ says a proud Owen.

‘After their morning feed, I like to let them out to wander around for a while. I also tend to the coops and look after the gardens.’

Find dementia services near you

‘Even as her dementia became more advanced, Bell was still involved. It’s relationship-centred care and the hens are integral to their day-to-day living.’

Residents created a community orchard in memory of Bell. Today’s HenPower session includes choosing wildflower seeds to plant around the gardens and orchard. Owen created the stepping stones that feature around the orchard and the stones were decorated by schoolchildren. The wooden bench has a plaque that’s dedicated to Bell.

‘Bell loved sitting there and being around the hens,’ says Owen.

Carers: looking after yourself when supporting someone with dementia

As well as the impact on the person with the condition, dementia also has a considerable effect on those supporting them.

Wood Green’s HenPower volunteers, such as Owen, are known as ‘hensioners’. They share their experiences and knowledge in local schools, universities, care settings, summer fairs and as part of HenPower roadshows.

Owen’s experience of being a carer is also helping fellow resident George Wright. His wife Carol was diagnosed with Alzheimer’s disease in November 2018.

‘Carol enjoys the creative activities and it’s a break for me,’ says George.

‘It was a shock when we received the diagnosis,’ says George. ‘There are already signs of her changing and she has good and bad days. She enjoys the creative activities and it’s a break for me. You’ve just got to get through it.

‘The residents here and our family are a good help. I really enjoy the hens being around. I like to sit outside and just watch the hens going about their day. It’s so peaceful.’

Adult nursing students from Northumbria University are also here today to find out more about HenPower and life at Wood Green.

‘It’s the first time we have visited, as we’re just about to start a module on older people’s care,’ says student nurse, Sarah. ‘This isn’t like anything we’ve experienced so far on the course.

‘Caring for the hens gives the residents a sense of purpose, as the hens rely on them and they rely on the hens. Being around the hens is therapeutic – even if they don’t touch the hens they still benefit.’

More from Dementia together magazine: Oct/Nov 19: