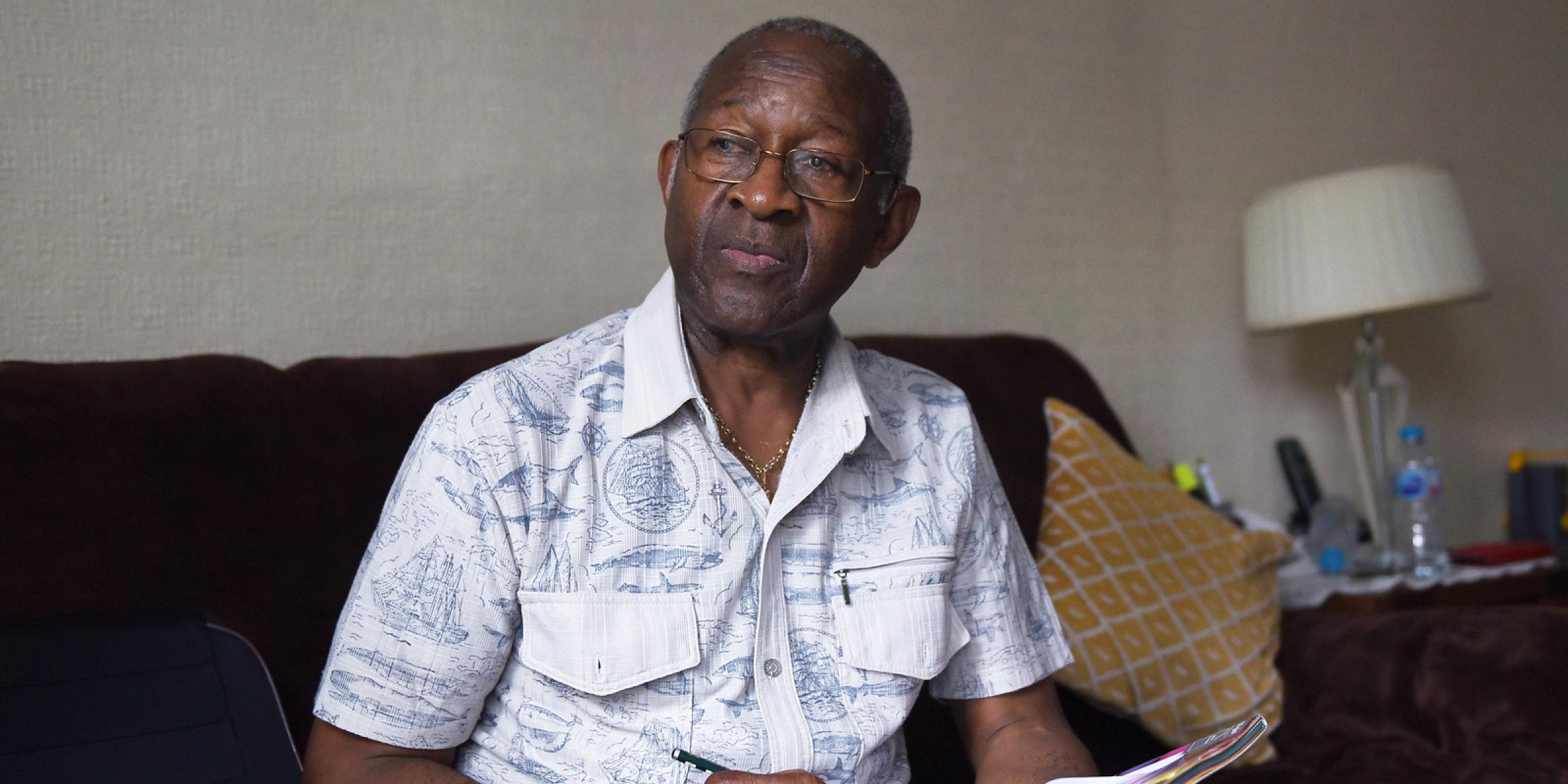 Real stories
Anything I can do: Starting conversations about dementia
Dementia together magazine: Oct/Nov 19

Having ‘come alive’ with the support he’s found through Alzheimer’s Society, Raymond James is now doing all he can for the cause.

‘Dementia was not known widely when I was a boy,  but now even the littlest child would know what it is – that’s a very good thing,’ says Raymond James, who was diagnosed with Alzheimer’s disease in April 2017.

Having better come to terms with his condition through the support of his wife and Alzheimer’s Society, 79-year old Raymond is putting himself in the public eye to help increase people’s awareness of dementia.

Press the orange play button to hear this story in Raymond’s own words:

Raymond was born and raised on the Caribbean island of Trinidad, where he lived until his mid-20s.

‘It was fantastic growing up there,’ he says. ‘I lived with my grandmother and got a good little job as an apprentice engineer, learning to repair outboard motors.’

The teenage Raymond had his own steel band, The Dew Drops, who performed all over Trinidad, even appearing on television.

Raymond also developed a passion for the steel pan, the national instrument of Trinidad and Tobago.

‘One of my brothers had a steel band in a competition in San Fernando, but the tune they were going to play, to me it wasn’t any good,’ he recalls. ‘So I tune all the instruments properly for them and teach them a new arrangement. The next week he phoned me and said they came second!’

The teenage Raymond had his own steel band, The Dew Drops, who performed all over Trinidad, even appearing on television. Raymond also played at Notting Hill Carnival after moving to London in the 1960s.

He migrated in his mid-20s and was a laboratory steward for British Gas for 27 years. After turning down the option of relocating to Loughborough, he was made redundant and later worked for a friend’s building and restoration firm.

Raymond lives in Fulham, south west London, with his wife Cynthia – a former manager at BT and hospital receptionist – and the couple have two children and three grandchildren.

It was Cynthia who first noticed that something was wrong with Raymond’s health, long before her husband was actually diagnosed with dementia.

‘For five years I was saying to Raymond and the kids that something was wrong,’ she says. ‘He would just sit there like a little child lost, or he’d get annoyed for no reason and scream out. He wasn’t the same guy.’

‘When I went upstairs, I didn’t know what I’d gone up for. But most people do that, so I didn’t think,’ says Raymond.

Raymond acknowledged he was experiencing memory problems but didn’t think they were related to a condition such as dementia.

‘I only thought I was very forgetful,’ he says. ‘When I went upstairs, I didn’t know what I’d gone up for. But most people do that, so I didn’t think.’

Raymond went to the doctor’s on Cynthia’s advice but wasn’t diagnosed with dementia until a later visit to the neurologist after experiencing sudden hearing loss. They sent him for a brain scan, which led to a diagnosis from the dementia service at a hospital in nearby Hammersmith.

Raymond now enjoys attending a day centre in Hammersmith that Alzheimer’s Society put him in touch with. However, he admits to being unsure about going at first.

‘I’m a lively person and my impression of people with Alzheimer’s was this,’ he says, dropping his head to his shoulder to mime someone who is uncommunicative or sleeping.

‘But they’ve got two guys there I’m very good friends with. We talk, make jokes and laugh. We chat about football, cricket, anything that’s in the papers. We talk about Boris! It’s good for us – we have a good time.’

The activities include exercises, singing, dancing and general knowledge quizzes, and they sometimes go on walks or trips.

‘What makes it great is the staff – they’re wonderful people. They make you feel happy, and if you need anything they get it for you. I’d recommend it to anybody,’ says Raymond.

Cynthia, who attends carer support sessions at the same venue, says the service has helped Raymond come to terms with his diagnosis and ‘come alive’, leaving him in a ‘completely different place’ to where he was in 2017.

‘It makes me a more active and independent person,’ Raymond adds.

Another success story is the drawing that Raymond started to do at classes in Hammersmith.

This has led to him producing some excellent artwork, including portraits and still life drawings.

‘I’d never done anything like it – I couldn’t draw anything at all,’ he says. ‘But I had about 10 up at the centre. The lady who teaches me said I was the best student.’

Raymond sometimes feels less able to do certain household tasks, such as DIY, while Cynthia now deals with all paperwork and telephone calls. However, Raymond remains positive about his overall situation. Spending time with people whose dementia is more progressed than his own has also given him perspective.

‘Dementia isn’t a nice thing to have but you can’t say, “Why me?”’ says Raymond.

‘Dementia isn’t a nice thing to have but you can’t say, “Why me?” These things happen and you’ve got to accept it,’ he says.

‘It doesn’t affect me as bad as some of the other guys. If I want to get the bus or train I’ll just get it – I just tell people where I’m going first.’

Raymond feels more confident to travel alone because of a special wristband that he can press to alert those back at home if he gets into any difficulty. He takes a small bag containing food and water wherever he goes. Cynthia also ties his travel pass to this bag since he once lost it while out.

To help Raymond maintain his independence, Cynthia also put whiteboards around the house with reminders written on them.

Other family members are also very supportive, and Raymond was delighted when his teenage granddaughter Aaliyah did some impromptu fundraising for the Society. She set up an online donations page and quickly raised over £600.

‘I was so happy about that because no one asked her to do it, she just did it on her own,’ says Raymond. ‘I thought that was brilliant.’

Make your organisation more dementia-friendly with our helpful resources, including sector-specific information

Although generally upbeat, Raymond admits to some concerns about how much more dementia could affect his life in future.

He and Cynthia are regulars at their local supermarket, and while many of the staff there know that Raymond might need additional support, he preferred to tell only one that he specifically has dementia.

‘This world is not like it used to be and my belief is that, if people know you have dementia, they can take advantage of that,’ he says.

‘I don’t want to think that I’m going to become like some of the people I’ve seen,’ says Raymond.

He also chooses not to dwell on how his dementia may progress.

‘I don’t want to think that I’m going to become like some of the people I’ve seen,’ he says. ‘I wouldn’t like to get to that stage.’

Earlier this year, Raymond featured in a high profile campaign for Alzheimer’s Society as part of Dementia Action Week. This encouraged everyone to help tackle loneliness and isolation by starting conversations with people who have dementia.

He appeared in a film called Ask Us Anything, which showed children interviewing people with dementia. It was designed to challenge misconceptions and show that people with the condition are still themselves, despite the challenges they may face.

‘It was good, I enjoyed it,’ says Raymond. ‘One of the little boys asked me, “Have you ever gone outside without your trousers?” He was so funny!’

These Dementia Action Week films have been watched over 8 million times online, while 28,000 new Dementia Friends were created amid more than 1,000 local events during the week.

Raymond hopes that appearing in the film and sharing his experiences will add to increasing awareness and encourage others to seek support.

‘In the past, if you see a guy acting strange you would say he’s drunk or he’s mad, but now you might think that he’s got dementia,’ says Raymond.

More from Dementia together magazine: Oct/Nov 19: