Real stories
Strain on the family: A daughter shocked by what she has seen
Dementia together magazine: June/July 18

We meet Louise Thomson, who had to care for her mother while raising a young family. 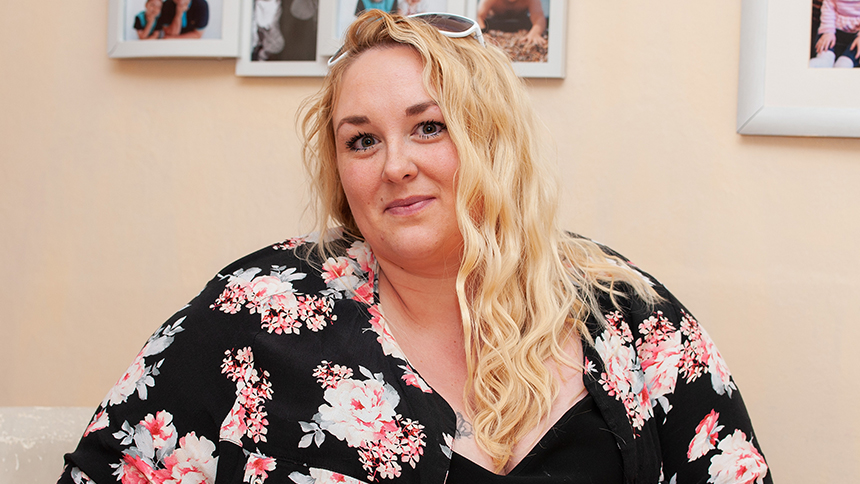 Alzheimer's disease is the most common cause of dementia, but there are many rarer diseases and conditions that can lead to dementia, dementia-like symptoms or mild cognitive impairment.

When Louise Thomson moved her young family from Essex to Surrey, she assumed that her mum Teresa, who lived nearby, would be on hand to offer support with childcare.

But those plans, and many other hopes for a settled family life, have been turned upside down by Teresa’s dementia – a rare form called posterior cortical atrophy (PCA). Its progression has been dramatic, and Louise is not only raising two children without her mother’s support but also caring for Teresa herself.

Living with dementia is likely to have an impact on the people around you and your relationships. These pages will help you understand how your relationships might change, and what you can do to prepare for and live with these changes

Teresa, 56, was a bodybuilder who had owned a gym business and worked as a surgical nurse. Art was her great passion, particularly painting with acrylics.

‘She was kind, peaceful and bubbly,’ says Louise, who lives in Redhill with her partner Mark and children Oliver, 10, and Miley, 4.

‘She became a vegetarian because she didn’t want to hurt animals.’

It was around seven years ago, when Teresa was just 49, that Louise first noticed changes in her mum’s behaviour.

Teresa started letting herself into Louise’s house on her own, which she had never done previously.

She would also send very short replies to lengthy text messages, or even respond with a call, which again was unusual.

There were further problems a couple of years later when Teresa was looking after Oliver. This included Teresa forgetting to give him the lunch Louise had provided.

‘Other times, Mum would forget that she was supposed to be having him.’

A doctor suggested that Teresa may have a thyroid problem, but tests came back clear, while they also mentioned ‘brain fog’ caused by the menopause.

Louise kept asking Teresa if she was OK, but her mum insisted it was just the menopause.

‘The more I pressed, the more angry and upset Mum got,’ says Louise. ‘I felt I was being this awful, naggy person.’

‘After Mum lost her job, the occupational therapist said she had anxiety and depression, so I just ran with that.’

As Teresa’s only child, Louise was already feeling the pressure of responsibility when, in 2016, she arrived at Teresa’s house to take her out for a pamper day.

‘I got there and found her walking around the house naked,’ says Louise. ‘She was acting like there was nothing wrong.’

‘We went to the doctor’s and Mum was crying and saying, “I know I’m going to die.”’

Teresa failed a series of neurological tests and couldn’t even recognise Louise. A brain scan at hospital in June 2016 then revealed that she had PCA, caused by Alzheimer’s disease.

It was later suggested that Teresa had experienced a transient ischaemic attack – also known as a mini-stroke – a couple of months previously, which had quickened the onset of her dementia.

As the dementia progresses, many people develop behaviours that can be challenging. This includes restlessness and aggression.

‘There have been so many occasions where I can’t talk afterwards because I can’t believe what just happened,' says Louise.

Teresa’s behaviour could be challenging, such as chasing Louise around the house, swearing and screaming at her. Teresa has also experienced hallucinations.

‘It’s been hell,’ says Louise. ‘There have been so many occasions where I can’t talk afterwards because I can’t believe what just happened.’

Although it became clear that Teresa’s needs would be better met in a care home, it was a struggle to find an appropriate place that would accept her.

Following another stroke and a four-month spell in hospital, Teresa entered what Louise describes as an ‘amazing’ home last September.

However, Teresa has since had seizures that have reduced her quality of life.

‘She can’t hold her own head up, and her arms and hands are fused in a particular position. She’s out of bed for two hours a day,’ says Louise.

‘Every time she has a seizure it takes something away.

‘There is sometimes a glimmer of who she used to be, like this certain movement she does with her shoulders, but it’s less and less now.’

The time and energy needed to support her mum led to Louise giving up her job as a childminder while continuing to raise a young family.

‘It was a real strain on home life, really bad. I had a meltdown and was put on antidepressants.’

Her son Oliver has also been affected by Teresa’s illness.

‘They had a close relationship, so he’s been down about it,’ says Louise.

‘He says he misses his nanny but that he doesn’t want to see her because she looks “dead”.’

Louise has received strong support from friends, family and the church where Mark works as a caretaker, as well as other members of a PCA group on Facebook.

‘I would work as a team with Michael on the admin, and had friends or family who could help look after the children,’ she says. ‘I’m also really lucky that Mark is so good – we’ve been through a lot together.’

Louise is frank about the emotional toll that her mum’s dementia has had on her.

‘I got really angry a few times,’ she says. ‘I’ve been through cervical cancer and miscarriages, then finally got pregnant and moved here to be closer to Mum, and this happened. It pissed me off.

‘I’ve also got upset, thinking that one day this will be me, which is selfish really. But I’ve turned down genetic tests – I don’t want to know.’

‘I don’t feel like it’s my Mum anymore, to me they aren’t the same person,’ says Louise.

Louise feels able to be so open about her experiences because Teresa has become so far removed from who she once was.

‘I don’t feel like it’s my Mum anymore, to me they aren’t the same person,’ she says. ‘It’s such a shock to go from one to the other.’

Louise hopes that sharing her experiences will help raise awareness of PCA and the challenges it brings. This includes how different its initial symptoms, such as problems with vision, can be.

‘Dementia isn’t just a forgetful old person – I was so shocked by some of the PCA symptoms,’ she says. ‘I hope people might read my story and think, “I’m not alone.”’

Relationships and Family, Posterior cortical atrophy (PCA)
Back to top

Dementia is soul destroying, it makes you grieve for the person even though in body they are still here, we have been going through it for 2years now and its starting to affect me and my mom alot. The nursing home think my nan is hilarious and everybody loves her but this isnt my nan anymore they dont understand how we come away crying and distressed every single time we visit asif we should be greatful she is still here when all is happening is she is suffering over and over and every infection, every seizure every fall a piece of her is taken again and we lose the person she once was. My nan was sectioned for 6 months on the day of my grandads funeral he died jan 2018 whilst all of this was going on. Its 2years today since it all began and she had a heart attack, then 2strokes and a bleed on the brain within 4months. Your so strong for what you do and have done your mom would be proud of you it takes alot of strength and fight to cope with dementia, not knowing if this is going to be the last day or then feeling bad for wanting the suffering to be over and life to start again :( its bad enough for the person going through it but also for everyone around emotionally connected to that person. It is pure torture, hopefully 1day there will be a cure.

Bit late I know but just to add.
You can have a houseful of people; friends; family etc yet
As as carer full stop you are very much alone emotionally. Its hard what ever your situation but having distraction of bringing up children will bring joy and highs. Plus some people have 2 parents with complex medical health issues & Dementia in 2 different places to support like in my case.
Eat well; exercise and try to remain positive. Its not going to be forever and does not come naturally to all.
Look at the difference you make to someones life and the alternative for loved ones if you are not there to support them. :)

As much as I have sympathy I am a single person, a wife, looking after my husband.... I have no one to share my emotional problems with and am ashamed that I can't seem to cope on a 24/7 basis. Mental health problems affect carers whether they are bringing up children or not. We need to show plight of ALL carers to the unseeing, unknowing world.

Hi Wendy, thank you for your comment and for sharing your experience. We do try to cover a wide range of personal stories on the blog.
If you would like any advice or support please get in touch with our Helpline. One of our advisers would be very happy to have a chat: 0300 222 11 22

Thank you for sharing your story. It does help with the ‘I’m not alone feeling’.
My Mum was sectioned for her dementia and they’re just about to move her from a 2 to a 3 to keep her beyond the four weeks.
It’s brutal to watch, and I cling on for the times when you see her, the loving, amazing mum she always was.
It’s a cruel, scary and unpredictable disease. My heart goes out to anyone, or any families dealing with it. X