We report on a scheme that’s keeping communities connected 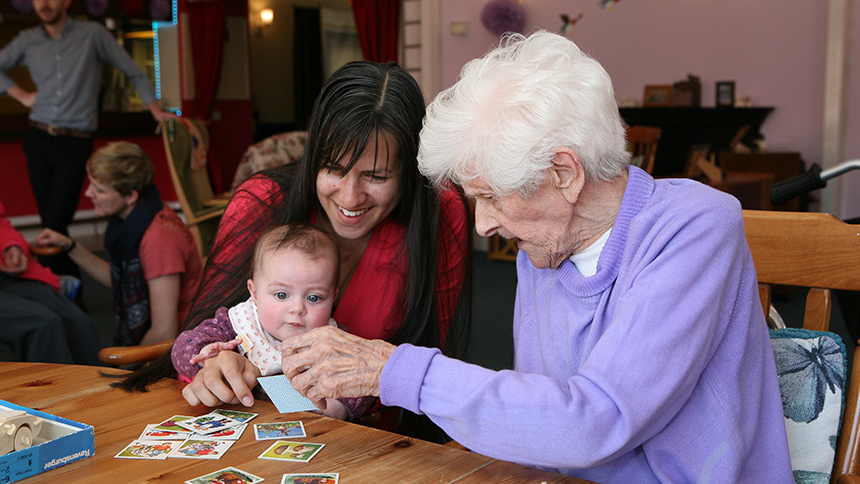 Alzheimer’s Society is encouraging the next generation to become dementia friendly.

An otherwise ordinary afternoon at Stradbroke Court care home in Lowestoft, Suffolk has been immediately brightened by a collection of young visitors.

The babies and toddlers are here with their parents to spend time with residents, many of whom have dementia.

It’s all part of Little Visitors, an intergenerational scheme across Norfolk and Suffolk run by the social enterprise Friend in Deed.

‘My nan had Alzheimer’s and went into a good care home, but there wasn’t enough interaction.

‘We need to reach out to older people with dementia and offer as many things as we can.

‘When I was a teacher I also noticed that some younger people aren’t given opportunities to understand how to be kind and empathetic to others.’

The children and residents are soon at ease with each other – playing games, chatting or simply interacting.

‘We love the children coming here,’ says Maisie, one of the residents. ‘They’re absolutely gorgeous, they really are lovely.

‘It’s very nice to see them, we like to include them in things. It makes the day really.

‘I want to take them home!’

Having been playing a card game with some of the residents, three-year old Alfie now turns his attention to decorating the walking frame of Dilys, using their initials.

‘I like to see children with good manners, well-behaved. The children today have all been very good.’

'It’s a step back in time - it makes us feel a lot younger,' says Maggie.

Another resident, Maggie, thinks the session is brilliant.

‘It’s maybe because it’s a step back in time, it makes us feel a lot younger.

‘We see them come through and we want to play with them – and we do!’

The Little Visitors scheme creates a sense of wellbeing among residents, according to Stradbroke Court manager Dawn Bunter.

‘Living in a care home can be very restrictive and people can feel ostracised, so it’s important that a person with dementia gets to see people from the outside world in a happy environment,’ she says.

‘Being around children and other families gives that feeling of community.

‘Some residents won’t respond to us but when the children are here they want to join in.’

The visiting youngsters, such as 13-month old Erin, also benefit from spending time with new faces.

‘It’s really nice to see her interacting with people of all ages, not just other children or her parents,’ says mum Alice. ‘It helps her people skills too.’

‘We always see the difference it makes to them and to Erica,’ says Maria, who has now noticed her daughter become gentler with the family dog back home.

As a regular visitor to the home, Alfie has built up a good relationship with residents, which pleases his mum Kelly.

‘Alfie is normally really shy and doesn’t talk to anyone, but he’ll talk and interact here,’ she says.

‘We haven’t got any older relatives so it’s nice for him to learn to interact with older people.’

One of the strongest bonds to have developed is between Alfie and resident Graham.

'Alfie talks about him all the time at home – he was excited to see him today,' says Kelly.

Graham doesn’t have dementia but is still very much involved in the project, much to Alfie’s delight.

‘He loves Graham and talks about him all the time at home – he was excited to see him today,’ says Kelly.

Graham, who has been playing card games and skittles with Alfie, never had any children of this own.

He is soon interrupted by an excited Alfie, who has found more cards for them to match up.

‘Oh look at this, here we go!’ says Graham, as the two start playing again.

Alfie later takes a break from his busy schedule to explain why he enjoys visiting the home so much.

‘I like playing with Graham,’ he says. ‘We got matching penguin pairs!’

With that he scampers off, having spotted another game on the other side of the room. 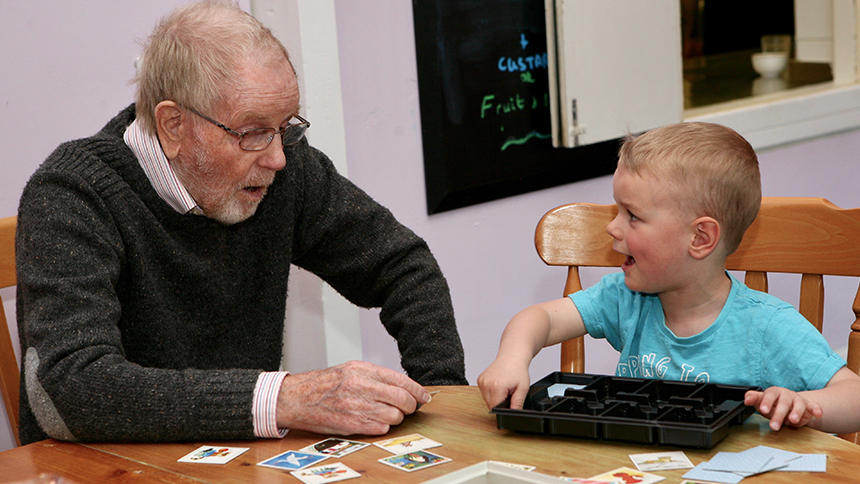 Some residents have formed close bonds with the visiting children

Dawn feels the project is helping to break down the stigma that can surround residential care.

‘People see care homes as places not to visit or be around, but this educates children that people shouldn’t be shied away from,’ she says.

Kelly Lindsay, who is also a Dementia Friends Champion, is now seeking further care homes and volunteers to help expand Little Visitors into new areas in the east of England.

‘I’m proud of the positive impact we’re having on people living with dementia,’ she says.

‘We need to promote kindness and that we should look after people, regardless of who they are or how we know them.’

Hello,
I love the idea of the little visitors scheme, having had a daughter myself and working as a therapist on a elderly rehab ward it sounds like a fab way to link both of my experience.

Are there any little visitors schemes set up in essex? I would be very interested in joining if so

Hi Louise,
Thanks for getting in touch. You might like to take a look at the website for Friend in Deed; they're the Norfolk based charity that this article mentions: https://www.friendindeed.org.uk/ They might know about some similar things going on elsewhere in the country.
We hope this helps!
-
Alzheimer's Society blog team

Hello,
I am obviously keen to help my step father as much as possible. He is living with dementia but living in his own home.
Will you be adding an update to your magazine or website as the "Little Visitors" scheme develops into other areas.
We live in Hampshire, in Fleet.
I look forward to hearing back, thank you,
Zelda