Gareth Bracken visits a college where hundreds of new Dementia Friends are signing up to the cause.

A college that is embracing dementia awareness 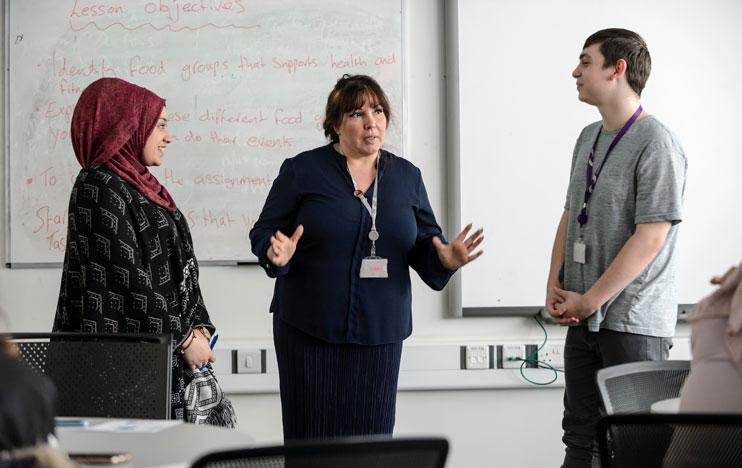 Standing at the front of the classroom, Lesa Jones takes two teenagers by the arm and shakes them both vigorously.

She is demonstrating the bookcase analogy, which uses the idea of books on shaky shelves to help explain how dementia affects different kinds of memories.

As she speaks, you can hear sounds of realisation and understanding from her audience, a group of health and social care students at Sandwell College in the West Midlands.

Dementia Friends is the biggest ever initiative to change people's perceptions of dementia, and people can sign up by attending a face-to-face information session or watching an online video.

Through the hour-long sessions, led by specially trained Dementia Friends Champions such as Lesa, participants learn more about dementia and how they can make a difference.

'I don't want you to only see the disease and not the person,' Lesa tells the group.

The students are attentive and engaged as Lesa shares information, statistics and stories about dementia. She also takes them through some interactive activities.

By the end of today's two sessions, the number of Dementia Friends among the college's students and staff will have crossed the 300 threshold. One session was even held for school pupils who were visiting the college for the day.

'I'm pleased and proud that I was able to introduce it to the college,' says Lesa, who is on secondment from a local NHS Trust.

The impact goes well beyond Sandwell College, particularly since health and social care students complete work placements as part of their course.

'Dementia Friends sessions are beneficial as they give students confidence and a better understanding,' says Keith Davies, who organises the work placements.

Helen Dalloway, the college's Communications and PR Officer, adds, 'Lesa has given students real-life situations – they can take their learning out into the real world – using her NHS experience.' 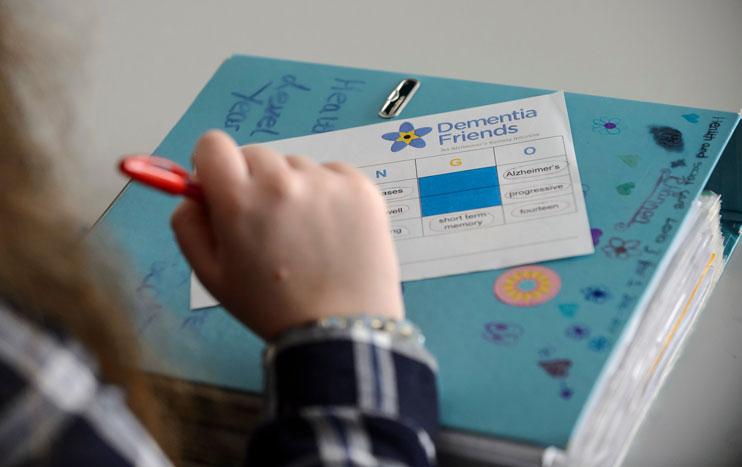 Abbie Shepherd, 16, is on a placement at a local day centre, and most of the people who attend it have dementia.

'I learned how much people with dementia can do, I was surprised,' she says of her Dementia Friends session. 'But they still need help in certain areas – I can help them in those areas.'

'People with dementia shouldn't be discriminated against, they should receive the same care,' says Majestee.

She feels more confident about supporting someone with dementia who is distressed, and adds that she's already put this into practice at the day centre.

Another student, Majestee Connor-Paul, 19, is on her second work placement since becoming a Dementia Friend.

'People with dementia shouldn't be discriminated against, they should receive the same care,' she says.

She says the sessions taught her about how dementia progresses and what changes to expect. She's also applied her knowledge to how she relates to her grandad, who has dementia.

'I'm happy to calm him down and I won't get frustrated as much.'

Majestee is now even considering becoming a Dementia Friends Champion herself.

As well as being part of the local dementia action alliance, Sandwell organised its own Memory Walk to raise funds for Alzheimer's Society and increase awareness of dementia. They are also planning an event for Cupcake Day in June.

Although all Dementia Friends sessions follow the same structure, each one is unique because of the questions and contributions of those involved.

In the first of today's sessions, someone asked about the difference between Alzheimer's disease and dementia. In the second, a student suggested a practical way to help someone who is having problems with different walking surfaces.

'I learned that there is more to a person than dementia,' says one student.

'The students have been very engaged in the programme,' says Jo Whitelock, an assistant director at the college. 'It's something we want to grow.'

After every session, students are asked to write down any thoughts or feedback that they have.

'I learned that there is more to a person than dementia,' says one.

'I was able to understand the needs of someone with dementia,' reads another.

We have a long way to go in challenging and changing people's perceptions, but Dementia Friends is clearly having an increasing and valuable impact.