We took a new range of specially designed clothes for men to a group of people with dementia in Peterborough.

Peterborough’s Healthy Memories group for men meets weekly at the local Dementia Resource Centre. It’s a friendly place for men with dementia to enjoy different activities, and we asked for their feedback on a range of clothes for men, specially designed to be easy to put on and take off.

The Able Label was founded by Katie Ellis after she struggled to find stylish clothes for her grandmother, who had Parkinson’s disease dementia.

Whenever we showed people the company’s womenswear, they asked about similar clothing for men. The Able Label responded by developing a new range.

10 ways to make dressing easier for people with dementia 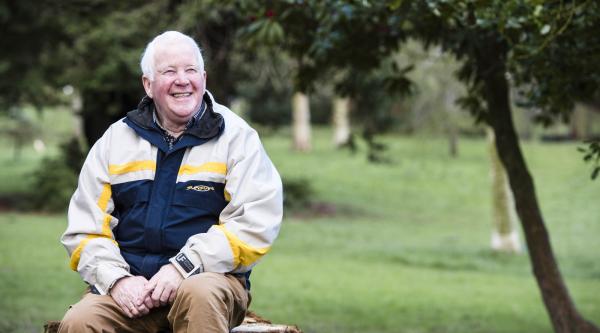 Advice
As dementia progresses, a person may need more help with everyday activities such as getting dressed. We share 10 ideas that could help make dressing easier while retaining personal choice and identity.
15

We showed the group two shirts, both with buttons going down the front, though these are purely decorative. Behind each button is a strong velcro pad, and it’s these that you use when dressing.

Barry liked the idea of hidden velcro fasteners. ‘I think it’s handy,’ he said, ‘I like that.’

Alison, a volunteer at the group, wondered if the back of each velcro pad might scratch your skin, though Frank, feeling them, said, ‘I think it would be OK.’

The more formal looking white shirt, called ‘Hugo’, also comes in blue. The other, ‘Miles’, had a floral pattern, and is also available in stripes or checks.

Apart from them being helpful, Jim said the shirts are ‘very fashionable as well’.

Although Frank wasn’t a fan of the floral version, the other ‘Miles’ shirts were more his style. ‘The pattern’s too fancy for me,’ he said. ‘I prefer stripe or check.’

‘Miles’ is 100% cotton, while ‘Hugo’ is a cotton/polyester mix and needs no ironing.

The group approved of the navy ‘Calvin’ clip-on tie, which also comes in black and burgundy. Frank suggested adding a bowtie because he enjoys wearing one and, ‘I like everything as easy as possible.’

When we looked at a pair of stone-colour ‘Spencer’ trousers, which have a velcro fly, group members agreed that trousers cause particular problems.

‘Trousers are the hardest thing to do,’ said Jim. ‘You’ve got to stand up to put them on, pull one leg up and then the other. With these, you wouldn’t have to fiddle with buttons or anything like that.’

‘All my trousers have zips,’ said Frank, ‘which all wear out and are expensive to replace.’

Barry asked if the ‘Spencer’ trousers are available in other colours because, ‘I like dark colours.’ Fortunately, there’s also a midnight blue version.

The trousers only come with a 78.5cm (31”) inside leg, which Barry said would be too long for many. The Able Label can shorten the leg to your measurements before despatch, costing £12.

‘It would be good if it had a stretchy waistband – that helps if you’ve got a belly, especially after a meal!’ said Barry.

Barry said, ‘It would be good if it had a stretchy waistband – that helps if you’ve got a belly, especially after a meal!’

Although the velcro used is very strong and designed to last, Jim worried about trousers bursting open. ‘Just one button or hook at the top would help to make sure.’

Everyone was pleased that the brown Able leather velcro belt comes in four different sizes, as the one we had was too small when they tried it on.

Once again, people wanted to feel secure about the belt’s velcro fastening. After pulling as hard as he could on it, Frank said, ‘It feels pretty strong.’

We had brought three nightwear options to the group. The ‘David’ brushed cotton pyjamas includes a T-shirt and the ‘Matthew’ pyjamas a shirt top, both with pull-on bottoms. The long ‘John’ nightshirt is also brushed cotton, with velcro fastenings down its front.

Barry liked the material used in ‘David’ and ‘John’, saying, ‘It’s nice and soft.’ However, Jim said, ‘Brushed cotton would be too warm for me to sleep in.’

Alison noted they all had ‘do not tumble dry’ labels, which could cause problems rotating between them if they don’t dry quickly enough.

The prices of all the menswear items (see below) were on the high side compared to what group members normally spent on clothes. However, they recognised that this reflected they were well made and specially designed.

Frank said, ‘The quality is obviously there – even I can tell that!’

The group also liked the zip pulls that can be attached to zips on jackets and coats, making it easier to open and close the zip.

The Able Label is giving our readers a special code 10% discount – order through their website and use the code ALZ5 at checkout.

Prices without VAT (you don’t have to pay VAT if it’s bought to be used by a person with dementia or other condition) – prices correct as of January 2020.

Products with no VAT relief – prices correct as of January 2020.

please are there any warm jogging trousers for my husband who has alzheimers with a fly opening he is 79 and cannot get on with trousers without a fly opening i have tried every where.

We're sorry that we don't have a product available in our shop like the one you've described.

Apologies again, Marilyn, and we hope this is helpful.

At last clothes to make people living with dementia and disabilities easy to use!! How my late husband struggled despite my help and rushing for the loo was a nightmare getting zips and buttons undone. He liked to wear smart things and wouldnt wear pull on joggers etc until in the later stages.
Unfortunately "Specialised" items always come with a higher cost!
Such a shame that in this enlightened age of awareness this type of clothing is not readily available with High Street price tags.