A Welsh speaker with dementia is thriving on volunteer support through Dementia Connect.

Dementia Connect, the Society's new personalised support service, means people affected by dementia are only one click or call away from the help they need. Our dementia advisers can support people directly by phone or face to face, and connect them to online support.

‘I can offer information, strategies and signposting, or just a listening ear,’ says Caroline.

Someone on my side: Dementia Connect 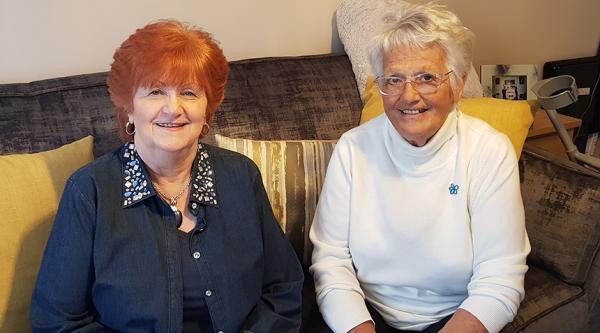 Real stories
A woman with dementia in south Wales tells us how our Dementia Connect service is making a huge difference to her.
0

‘I can provide tailored support to the person who has dementia or is going through the diagnosis process, and their families and friends,’ says Caroline Smith, Dementia Adviser in Ammanford, south Wales.

‘I can offer information, strategies and signposting, or just a listening ear.’

Dementia Connect, which is becoming available in an increasing number of areas, provides the right support at the right time as a person’s needs change.

‘The keeping in touch part of the service – where a person receives a telephone call every few months to see how they are – has been a great success,’ says Caroline. ‘People find it reassuring to know that they haven’t been forgotten.’

One of the people with dementia supported by Caroline is Jean Jones, a former librarian who lives on the Cardigan Bay coast.

Jean wanted to remain as active as possible, so Caroline referred her to our Side by Side service – a key part of Dementia Connect – where volunteers support people with dementia to remain part of their community.

Since mid-2018, Jean has been meeting with volunteer Elaine Davies for a couple of hours a week. They go on walks, shopping trips and visits to local places of interest.

Elaine and Jean are bilingual and have struck up a bond both in and through Welsh.

‘We had a local poet in the village years back whose wife used to bring me some of his poems, which I would recite and record for her in Welsh,’ says Jean.

‘We’re on the same wavelength and I’d miss her if she didn’t come,’ says Jean.

‘Elaine found me a copy of one of his books, so we’ve been going through a few of the old poems together. It’s been lovely remembering the words that I learned years back.

‘We have lots of good chats and I love telling her some of the stories I remember – some funny, some sad.

‘I think us both being Welsh speakers has helped make our relationship closer. We’re on the same wavelength and I’d miss her if she didn’t come.’

‘She’s a delightful woman who I’ve learned a lot from,’ says Elaine.

For Elaine, seeing Jean has become like visiting a friend.

‘She’s a delightful woman who I’ve learned a lot from,’ says Elaine.

‘There’s a certain sense of satisfaction that you perhaps brighten up her week and enable her to do things that she wouldn’t otherwise be able to do.’

Debbie Williams, the Side by Side Co-ordinator who brought Jean and Elaine together, says the service is helping people with dementia feel less isolated.

‘It gives them some independence,’ she says. ‘Many had been unable to continue doing the activities they once enjoyed, so it gives them back a bit of control in their lives.

‘For some it’s the highlight of their week.’

Dementia Connect is new, and parts of the service may not be available in your area just yet. Either way, find out how we could help you.

Support, Support for carers, Wales
Back to top

My dad has just been diagnosed with Alzheimer’s he is 88 and my mum is his main career. I wonder if there is any support for them

Hello Heather, thank you for getting in touch.
We're sorry to learn about your dad's recent diagnosis. This must be a difficult time for you all. We have a free guide available that you may find helpful - https://www.alzheimers.org.uk/get-support/publications-factsheets/carin… Caring for a person with dementia: A practical guide is available to download in a digital format, or you can order a copy to arrive by post.
In the meantime, if you or your mum would like to speak with one of our dementia advisers on the phone, they're available seven days a week to give you the support you need. Please call 0333 150 3456. You can find opening hours here: https://www.alzheimers.org.uk/dementiaconnect
Wishing you and your family all the best, Heather.
-
Alzheimer's Society