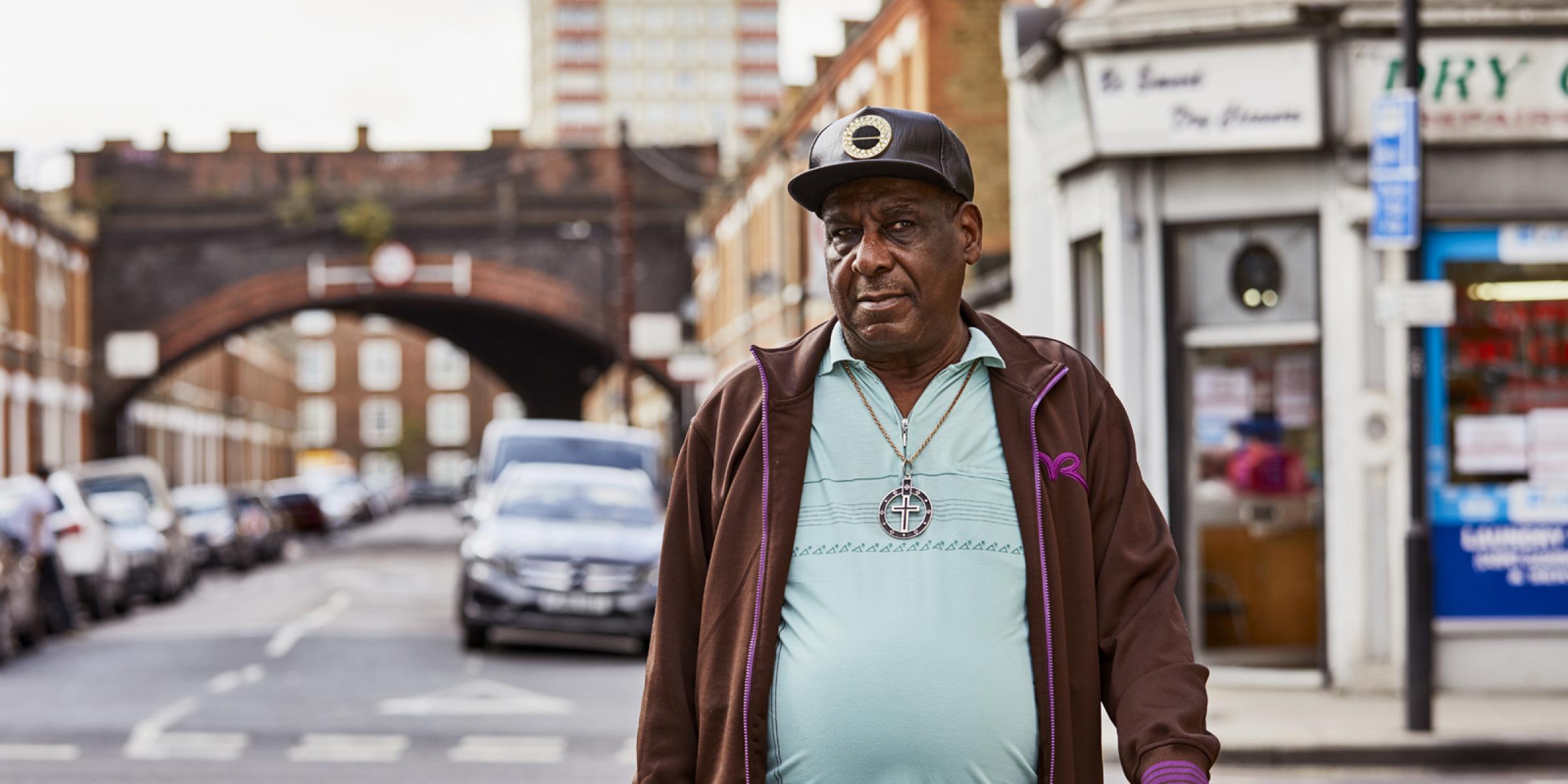 Real stories
It’s all of us: The true impact of dementia
Dementia together magazine: Feb/Mar 20

Gordon Lambert endured a difficult upbringing in Guyana, on the northern coast of South America.

‘My mum said to me that if I don’t work, I don’t eat,’ he says. ‘I would clean houses and yards, repair fences, pick up bottles to sell. She would get the money but I would get something to eat.’

After years of abuse, a teenage Gordon ran away from home to start a new life in England. Many decades later, his latest challenge is a diagnosis of dementia. Once again, he’s taking decisive action to improve his situation as best he can.

Press the orange play button to hear Gordon’s story in his own words:

The best of today: Accepting who I am 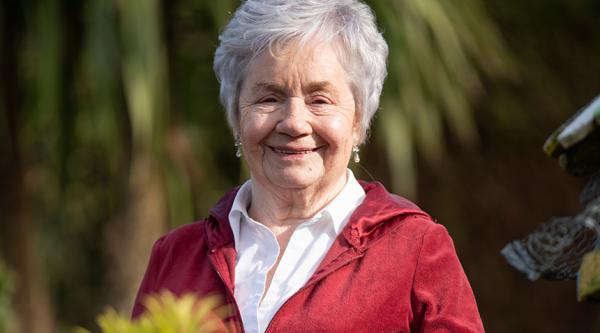 Real stories
Celine Quinn faces up to dementia with the support of her faith, family and Alzheimer’s Society.
3

‘My mum never bought me anything. I had to look after myself – that was my life,’ recalls Gordon, now 81.

‘When my school asked why I wasn’t going there, she would send me for maybe two weeks. But that meant I wasn’t working, so I didn’t get anything to eat.’

‘I’d see if I could find money on the road to buy food and drink,’ says Gordon.

‘I’d see if I could find money on the road to buy food and drink. Sometimes I’d even look in dustbins to see if I’d get anything to eat.’

‘She never actually told me why she did it, although she would say, “You’re just like your father.” But when I was older and found out who my father was, he seemed to be the nicest person you could find.’

Gordon worked at different times in a sawmill, bakery and grocery shop. Eventually, aged around 15, he decided to escape his mother by leaving the country, which was still called British Guiana at the time.

While attempting to get a passport, he discovered that he was listed on official records under a different surname to the rest of his family. This led him to believe that the woman he’d always thought was his mother might not have been after all.

Having said goodbye to his father, Gordon prepared for a fresh start in a new land.

‘I’d worked with a gentleman from Brazil, who had a plantation there where I could get a job,’ he recalls.

‘The last Sunday of every month, the ferry leaves Georgetown for Brazil. He arranged for me to meet him. He’s gonna pay my passage. But when I got to the port, the ferry wasn’t there. It would always leave at 9.15am – this particular morning it had left at 8.45!’ 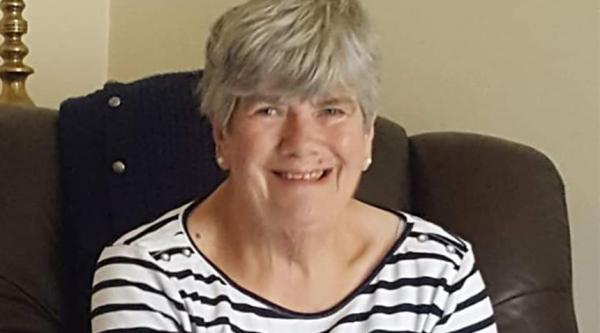 Real stories
Jean Eastwood, a 71-year old woman in Nottingham who has Alzheimer’s, answers our questions.
0

A deflated Gordon was bound for home when he was offered an unexpected opportunity.

‘This bloke said he was going to stow away on a boat to England and wanted someone to go with him,’ he says.

Although they were discovered on board, the water was too rough to transfer the stowaways to another boat headed back to port. Instead, the captain put them to work on the ship to pay for their trip.

‘The journey only took four or five days, so they reckoned we didn’t do enough work,’ says Gordon. ‘They put us in a boy’s prison for four weeks to make up the difference.’

After initially struggling to get a job because of a lack of paperwork, Gordon eventually worked at a car spray-painting business for just over a year, before spending the next 20 at a furniture factory. He was then a security guard for shops, offices and private clients.

Now in east London, Gordon has been married to Mary – who’s originally from the Caribbean island of Monserrat – for over 60 years. They have five children and five grandchildren.

Gordon was diagnosed with vascular dementia around three years ago after some puzzling experiences.

‘I’d walk to the toilet but then couldn’t remember why I went there,’ he says. ‘That was the main reason I went to the doctor.

‘A couple of times, when I was coming in from outside, I’d pass where I’m living. I couldn’t understand it,’ says Gordon.

‘A couple of times, when I was coming in from outside, I’d pass where I’m living. I couldn’t understand it. I kept thinking, “I don’t know what’s wrong.”’

Gordon can also struggle with reading.

‘I see the word, know what it is, but yet call it something else,’ he says.

On the advice of healthcare professionals, Gordon has been finding ways to keep his mind active.

‘They said I mustn’t get into myself too much. I must do things that I always do,’ he says. ‘Painting the kitchen, paying bills, going shopping – it keeps you sharp.

‘When I’m out, I keep looking at car number plates to give myself something to think about. When I’m indoors I play with playing cards. I find that what I’m doing is helping.’

Help us put more people in touch with local services

What is Dementia voice?

Dementia voice offers opportunities to people affected by dementia to use their personal experiences to help shape the work that Alzheimer's Society does.  It is also often referred to as 'user involvement'.

Gordon strives to remain upbeat about his situation but admits this isn’t always possible.

‘I try not to think about dementia too much and I don’t want it to get me down too much, but it’s a challenge to stay positive,’ he says. ‘Sometimes I sit at the table and tears come to my eyes, because I think of all the things I would like to do and places I’d like to go but can’t. ’

‘If it wasn’t for my faith, I don’t think I’d be able to carry on,’ says Gordon.

As a churchgoer, Gordon credits his faith with helping him navigate some tough times.

He receives good support from his family, including Mary, though she faces challenges of her own with mobility.

‘We support each other,’ says Gordon. ‘She cares for me and I care for her – it’s more or less equal.’

Alzheimer’s Society has put Gordon in touch with local support and activities that have also been beneficial. He loves going to his nearest Singing for the Brain group, where he enjoys the atmosphere. He’s even bought his own wooden percussion instrument and he takes it along to every session.

‘I haven’t a clue what it’s called, but they all love it!’ he laughs.

He also attends a Focus on Dementia Network group, where people affected by dementia have their say and influence the work of the Society and other organisations.

‘We’ve spoken about public transport and buses. Anything that can help a person with dementia, we discuss,’ says Gordon.

Gordon was one of four Hackney residents who appeared on posters during last year’s Black History Month.

Organised by Dementia-Friendly Hackney – a community group co-ordinated by Alzheimer’s Society – the posters underlined the kinds of rich life histories that every person with dementia has.

‘That was great,’ says Gordon, who also shared his experiences through the Society’s website.

‘I enjoy sharing my story,’ he says. ‘I hope people read about what I’ve been through as a child and then treat their children in a better way. ’

When it comes to dementia, Gordon has mixed opinions on how people with the condition are treated.

‘I think awareness might be getting a bit better, but there are some people who don’t care,’ he says.

‘More people should know about dementia – it’s something that anybody can get,’ says Gordon.

‘People are very helpful on the bus, but one time I fell outside and people were just looking at me and walking past. I suppose they thought I was drunk. I actually started crying. There’s no way I would pass somebody and not try to find out what’s wrong with them.’

Gordon wants others to realise the true impact of dementia.

‘More people should know about it – it’s something that anybody can get,’ he says. ‘People should know that dementia isn’t only affecting a particular type of person or group, it’s all of us.’

Music and Singing, Vascular dementia
Back to top

This is a very moving story and great to read how Gordon manages his dementia, and the impact other people's reactions can have on you.

This is great to have other ethnic community raising an awareness of dementia so we can see that dementia affects all!
This would enable people to be more concerned and not to be dismissive that it can't happen to them or some members of their family. Thank you Gordon for sharing your story and using your childhood experience to show what is child abuse.