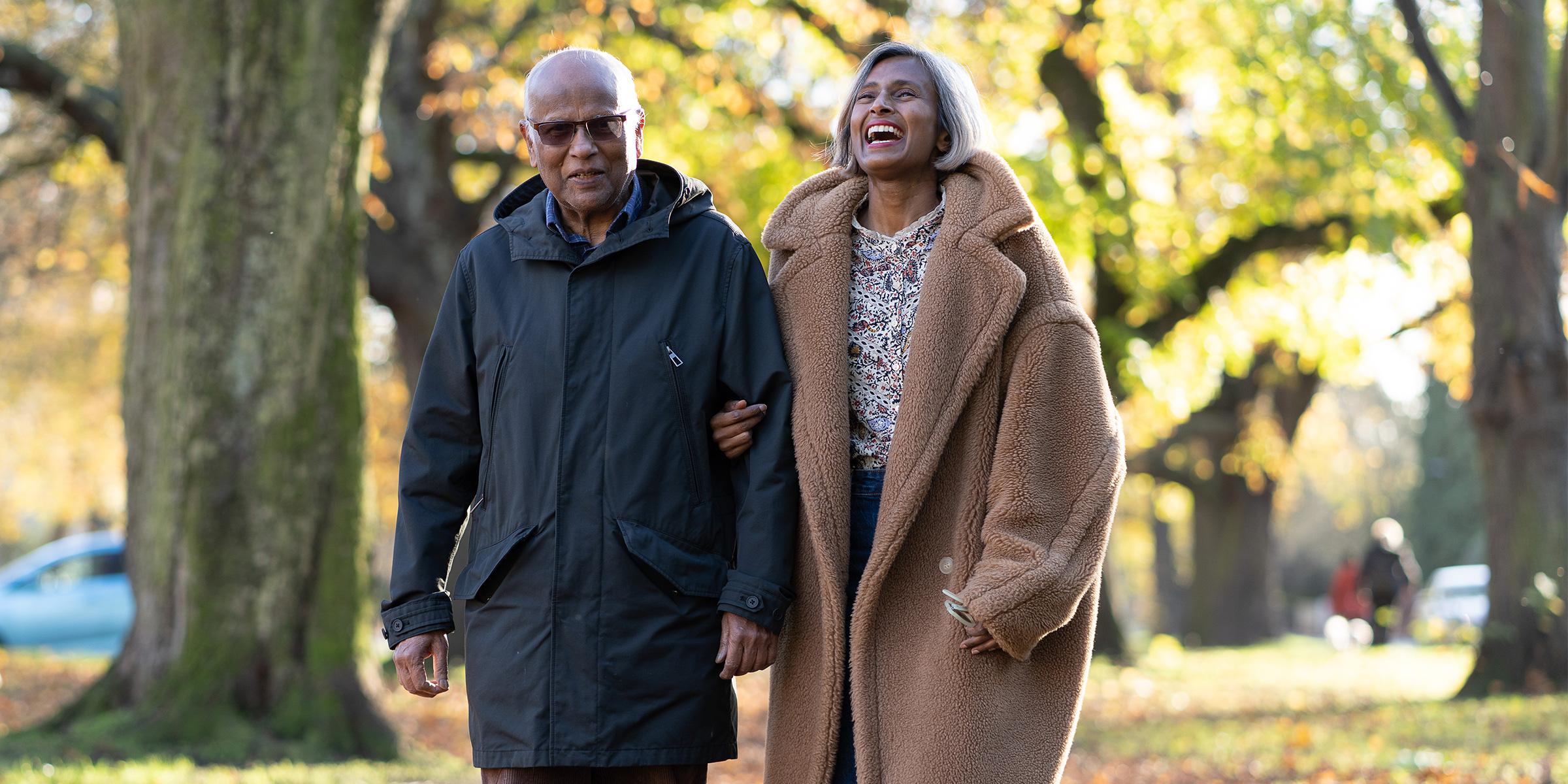 Having initially struggled to accept his dementia diagnosis, Musharraff Ali is now sharing his story to benefit others.

With the pandemic ongoing, our magazine interviews continue to take place by video call. This time we spoke to Musharraff Ali, who has Alzheimer’s and vascular dementia, to hear about his experiences of living with the condition.

Musharraff, who’s 81, lives in South Woodford in East London with his wife Selina and daughter Nadia. Nadia joined her father on the call to offer support when needed, in both English and Bengali.

The fact that Musharraff was prepared to discuss his dementia so openly shows just how far he has come since his diagnosis in 2014.

‘In the beginning, I didn’t accept dementia. But if it helps others, I’m all for sharing my story,’ he says.

Press the orange play button to hear Musharraff’s story in his own words:

The dementia guide is available in languages other than English, for anyone who has recently been told they have dementia.
Read more

Musharraff was born in Sunamganj, which at the time was in India but later became part of Bangladesh. One of 11 children, he remembers playing tennis on his family’s grass court when he was small, and later going on trips to hunt crane with his brothers, cousins and friends.

‘Some of the places took a day to get there, so we went at 5.30 in the morning, with dry food and fruit,’ he says. ‘We also had a big fishery – an artificial lake – for angling. I used to like it.’

Musharraff’s father was a political minister, who at different times had responsibility for revenue, forests, prisons and education.

‘He was very active on giving women the right to vote,’ says Musharraff, who would sometimes join him on political tours.

‘He was also a religious man – he translated the first part of the Quran into Bengali.’

Musharraff came to England in 1961 to study chemical engineering at the University of Bradford, having turned down a place at Imperial College London. Remarkably, he didn’t think he was good enough to go there.

He spent most of his career in the petrochemical industry, including designing plants for refining oil and gas. His work took him to London, Germany, Qatar and Aberdeen.

Musharraff was diagnosed with Alzheimer’s disease and vascular dementia in April 2014, having had quadruple bypass surgery in February 2012.

‘I was forgetting things, so my wife and daughter decided to send me to the doctor,’ he says.

Nadia recalls she and her mother pushing the GP to refer Musharraff to a specialist, which led to him having an MRI scan followed by cognitive tests at home. The results were used by a local memory service to make their diagnosis.

Nadia remembers her father falling quiet after being told he had dementia. ‘The doctor asked him what was on his mind, and he responded by asking something like, “How long have I got?” He felt it was some kind of sentence,’ she says.

Musharraff was shocked to receive the news.

‘I first of all thought that I didn’t have dementia. I didn’t believe the diagnosis, I resisted it,’ he says. ‘But then I compared that I don’t remember everything sometimes, so maybe the doctors were right. Eventually, I accepted the truth.’

Now more than ever: We are still here for you

Real stories
Coronavirus means that people affected by dementia need Alzheimer’s Society even more than before.
1

The doctor went through the different aspects of home life that Musharraff might need support with, but it turned out that almost all the tasks were already being done by his wife or daughter, much to the family’s amusement.

‘Taking the bins out, that’s my duty!’ Musharraff jokes.

Although dementia has presented challenges with his memory, Musharraff still finds humour in aspects of his situation.

‘Sometimes when I go out and my wife asks me to buy something, I forget about it, or I go to the shop and bring back something else!’ he says.

Nadia tells the story of her mother sending Musharraff out to get five large peaches, but him instead coming back with five huge potatoes.

‘There’s no point in getting angry or something like that. You don’t achieve anything,’ he says.

Like so many others, Musharraff has found the pandemic and lockdown a particularly challenging period.

‘It’s very bad, uncomfortable. I’m bored sometimes,’ he says. ‘I used to go to the mosque three or four times a day. I miss the exercise, making friends and having discussions there – there’s a good atmosphere.

‘I speak to my daughter, son and wife, but it can get boring talking about the same subjects, and having the same shopping list!’

Musharraff’s son, daughter-in-law and grandchildren live very near to him, and he appreciates the support he receives from his family.

‘Nadia is helpful all the time,’ he says. ‘If I forget something, she will understand. She doesn’t make a problem or make a hue and cry.’

Nadia is keen to point out that their relationship continues to work both ways.

‘He still supports me too, nothing has changed in that dynamic,’ she says.

‘He might not remember our discussions, but at the time he’s lucid and gives me his honest reaction.

‘His advice doesn’t lose its power just because he’s elderly and has dementia.’

Your wellbeing and support during coronavirus

The pandemic continues to place a huge strain on many people’s health and wellbeing, especially those affected by dementia. Our advice here sets out support available from Alzheimer’s Society and others, and how you can help look after your own physical and mental health.

For Nadia, supporting her father has been something of a learning curve.

‘I can only speak for the community that I come from, but I think we are the first generation to have the experience of seeing our parents live to these advanced ages,’ she says.

‘There’s nothing that my parents could have passed on to me about dementia within the culture, so it’s a very new experience, working it all out.’

The family has been receiving strong support from Alzheimer’s Society, in particular from Shuhala Abbas, a Dementia Support Worker.

‘I think she should be cloned!’ says Nadia. ‘She has a huge amount of common sense and humanity. I can see that she’s thinking about steps ahead and how to make those easier.

‘She’s suggested bringing somebody else into my father’s life who he can develop a relationship with and get used to. Someone who could take him to yoga classes, to help with his breathing. I thought that was a really good idea.’

Musharraff hopes that sharing his story will raise awareness of dementia while providing support to those who are also living with the condition.

‘Many people know about dementia superficially, but they don’t actually know what it is,’ he says. ‘Unless it happened to me, I wouldn’t have known what it is. I would like people to know about it.’

Nadia says this represents a big change in her father’s outlook.

‘After his diagnosis, he was very reticent about letting people know,’ she says. ‘When an interview was first mentioned, I thought he might want to keep everything private, but his first reaction was to say yes. It’s a strong signal of his acceptance, and a huge indicator of how far he has come.’

Having initially not wanted to tell friends about his dementia, Musharraff says he now adopts an attitude of, ‘What’s the harm in them knowing?’

Although he does wonder how dementia might affect him in future, Musharraff knows that he’ll receive ‘all sorts of help’ from his family. And as things stand right now, he’s very content.

‘I’m alright, my life is good,’ he says. ‘I have a wonderful family who are up to the mark, and whatever I’ve wanted to do, I’ve done it, more or less.

‘I’m satisfied with what Allah has given me. There’s no logic in asking for something else.’

Your donations help us to improve people’s understanding of what it’s like to live with a dementia diagnosis.

I was diagnosed with dementia 8 years ago. I’ve been very sad and lonely. Yet I have a wonderful family around me. I found this site tonight. Find ally my peeps. I live in mi. I’m 72 and becoming alone. God bless you all

Thank you for sharing your family story. I live in Central Oregon, USA and 3.5 hours by car over the mountains from my dad. My mom died from dementia in 2013 and he was her only care giver until the last year of her life. What a wonderful family you have.

Very sad . Such a nasty frustrated disease . Heard many people with active lives and educated people suffering this nasty disease.

Many thanks for this 1st email news letter of which contains so much reading that will keep me going for may days to come. Me I am in early stages of the condition and reading through some of the articles it does remind me of where I was and where I am going to. I was invited to take part in the survey for the scanning of old negative photos what great fun that was with the help of my wife Joyce it was a great success. So with the condition I cannot do all I could in the past but, there are many new roads to go along. For anyone with the condition don’t give up just think you do something no matter how little; (can do). John.

Such a brave and kind person! We just saw him on the weekend outside his house and was acting perfectly normal.