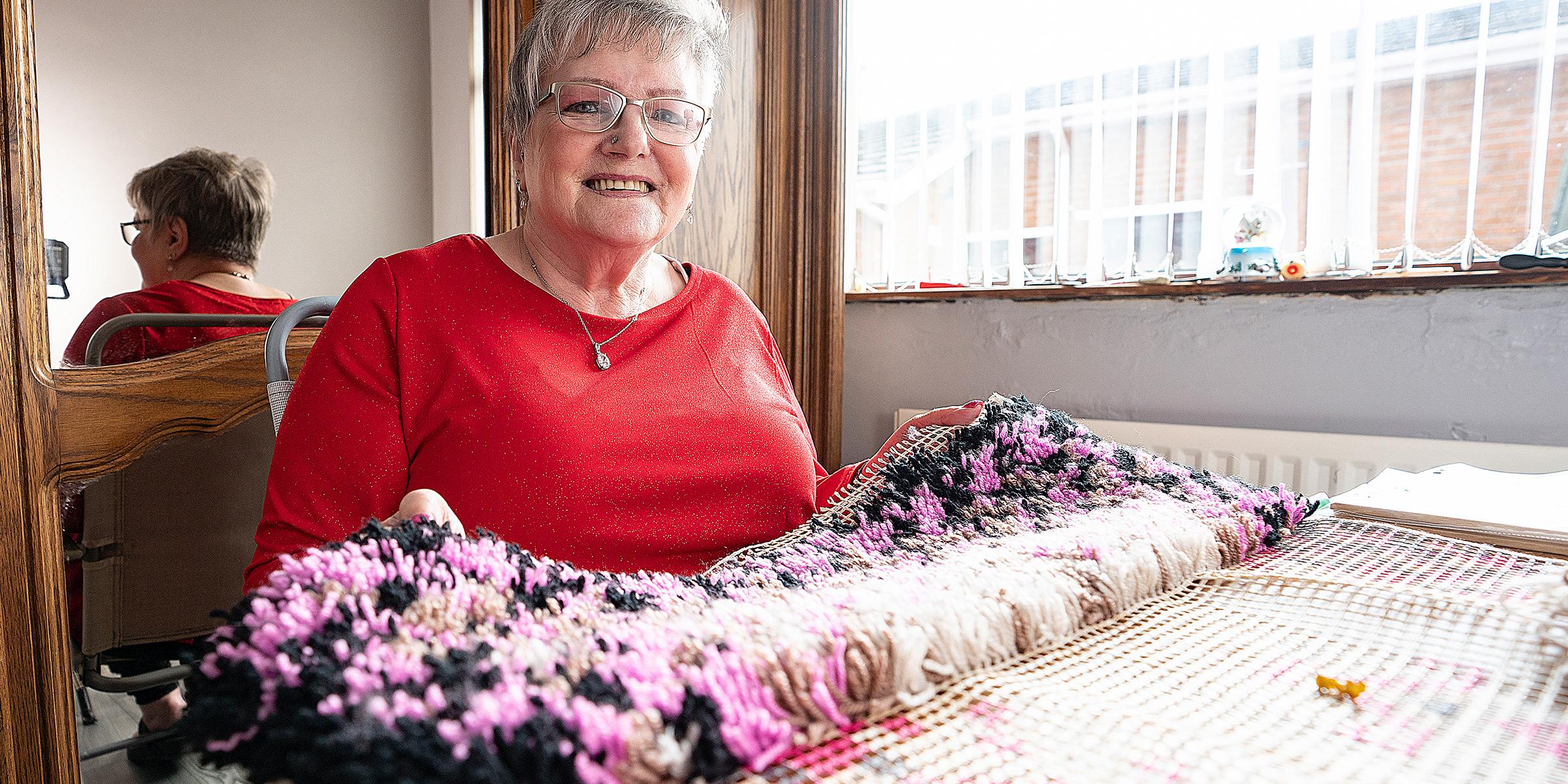 Real stories
Since her dementia diagnosis, Mary is finding ways to be thankful for each new day
Dementia together magazine: Aug/Sept 21

An Alzheimer’s diagnosis has meant a change of attitude and outlook for Mary Best, and she’s embracing new opportunities.

‘I don’t believe in looking forward – I can’t know what I’ll be like in a year’s time, so why worry about it,’ says Mary Best, who has Alzheimer’s disease.

‘The more you worry, the worse you’ll be, is the way I look at it.’

Mary, who lives in Belfast, has adopted a positive attitude and approach, which includes being open about her diagnosis, proactively seeking support, and staying as active and involved as possible.

‘You have to come to terms with it,’ she says. ‘Take each day as it comes and be thankful for it.’

Mary, now 70, grew up near Enniskillen, County Fermanagh, in the south-west of Northern Ireland.

‘I was fostered when I was two years of age – it wasn’t good,’ she says. ‘In them days, you were just given to people and they got money for looking after you. They didn’t treat me too well.’

Mary married in her mid-20s but after that ended in divorce, she was cut off from her two children and didn’t see her daughter Fiona for 10 years.

‘There was always a stigma that foster children weren’t good to their own children,’ she says. ‘But thankfully Fiona and I are as thick as thieves now.’

Mary was a prison officer in Holloway prison in London for three years in the late 70s, but mostly worked in care homes, looking after older people.

‘It was hard work, but I really enjoyed it,’ she says.

Mary has five grandchildren, including one in Australia. Her second husband, Henry, died before her dementia diagnosis.

‘Anything to keep my brain occupied,’ she says.

Mary first noticed problems with her memory when she started to struggle with her spelling.

‘I was always quite good at it, but then I was asking my husband and daughter how to spell things that I should have known,’ she says. ‘I was also making stupid mistakes when driving, like a missed turning. I would get agitated at myself.’

Having felt ‘very depressed and frustrated’ at what she was experiencing, receiving a diagnosis of Alzheimer’s disease in 2017 was actually a relief.

‘I knew there was something wrong, but I didn’t know what,’ says Mary.

‘When I was told, I knew how it was, how to fight it. Before that it was like holding a blank map, I had to go somewhere but there were no directions.’

Read about aids that might help with different types of memory problems.
Read more

Mary continues to face challenges with her short-term memory, which prompted a change in lifestyle.

‘I switched off the TV and started using my brain more,’ she says. ‘I think that’s the best way to fight it – don’t let your brain stagnate.’

She has also altered her outlook.

‘I used to worry about what people thought, but now I just think, “You only live once,”’ says Mary, who also uses hearing aids and a walking stick, as well as a rollator for longer walks.

‘I’m a great believer that if you lose something, you gain something,’ she continues.

‘If I hadn’t had something, I wouldn’t have met the people I’ve met – people with dementia and Alzheimer’s Society staff – who have been more than brilliant.’

The suggestion to contact Alzheimer’s Society was made by Queen’s University in Belfast, who Mary had approached about donating her body to science.

‘The Society have been a fantastic help,’ says Mary, who is involved with our work in several ways.

She is a member of a Dementia Voice local group, made up of people with dementia who influence Alzheimer’s Society’s and other organisations’ work. They do this by sharing their personal experiences, knowledge and skills to shape a wide range of projects and topics chosen by them.

‘It’s good to have your say,’ says Mary, whose group has given feedback about a new bank card and tested out mobility scooters.

Mary was also a judge for the Dementia Friendly Awards and has been to Stormont to speak to politicians.

‘I was there to give my input about what it’s like to have Alzheimer’s and what I thought they should be doing,’ she says. ‘It was good to tell my story and give them an insight into what people with dementia are going through.

‘Sometimes I think politicians are in a wee bubble – they don’t know how the other half live. If they don’t know anything about it, they can’t be expected to do the things they need to do.’

Mary enjoys going to a local day centre for people with dementia, which has been a valuable source of support.

‘Before that I was sitting in the house, thinking what’s the use in getting dressed,’ she says. ‘It gives you purpose, something to look forward to. I’ve made friends and the staff are brilliant.

‘That was the only good thing during the last lockdown, that the centre reopened in April. I got a bit depressed before that.’

Although the pandemic has affected her activities and interaction, Mary – who has had both of her COVID vaccinations – is trying to keep things in perspective.

‘People missed going on holidays, but I missed having a hug, the small things, she says.

‘I also miss going places through Alzheimer’s Society, but at the same time, people have had it worse than me.’

Mary receives excellent support from her daughter and son-in-law, which has continued through the pandemic.

‘Fiona gets my shopping and Joe does the weeding and gardening. There’s nothing they wouldn’t do for me,’ she says. ‘Sometimes I feel awful even having to ask, but I don’t know what I’d do without them. I’d be lost.’

Mary also appreciates regular phone calls from Margaret, a support volunteer who she was initially put in touch with by Alzheimer’s Society. Before the pandemic they would meet for coffee or go to the cinema or garden centre.

‘I don’t have any sisters, but Margaret is my age,’ says Mary. ‘For people living on their own, or for somebody with nobody, it’s good to have somebody.’

Mary currently attends community development sessions at a Women’s Centre, where she gives her views on local issues. She is also on a photography course that will see her work form part of an exhibition.

‘While you can keep doing something, you do it,’ she says.

As we hopefully continue to emerge from the pandemic, Mary feels that people with dementia can play a vital role in making others more aware of the condition.

‘Dementia awareness can be lacking,’ she says. ‘It’s got a lot better than what it was, but I think the pandemic has set things back. People are more into their own problems, like have they got a job.

‘But there’s a lot more can be done and some of that’s up to us.’

Mary also sees no reason for people to hide their dementia diagnosis from others.

‘What’s the use?’ she says. ‘What have you to worry about letting people know?’

And Mary advises anyone who has concerns about their memory to take positive steps towards getting the right help and support.

‘If someone’s worried there’s something wrong – like I was – get a diagnosis. A quicker diagnosis means more peace of mind, then you can fight it,’ she says.

‘It’s not the end of the world. There’s a life after dementia.’

You can inspire people like Mary to speak out about dementia by donating to help run Dementia Voice groups.

More from Dementia together magazine: Aug/Sept 21:

Hello, This article is most interesting & encouraging. I have a friend recently diagnoses with Alzheimers who lives alone. Who can we contact re advice re someone to visit friend & suggestions for those close to her re steps forward. Help re understanding the condition & how to speak with friend.
With thanks. Belfast area.

Thanks for your comment, and we're sorry to hear about your friend.

For advice about support and steps forward, we'd strongly recommend calling our Dementia Connect support line on 0333 150 3456. A trained dementia adviser can listen to you, and offer specific information, advice and support. More details about the support line (including opening hours) are available here: https://www.alzheimers.org.uk/dementia-connect-support-line

If you'd like to find out about support services in your local area, you can also search our Dementia Directory by entering your postcode here:
https://www.alzheimers.org.uk/find-support-near-you

We hope this is helpful, Gillian.