Information
Mobile and landline phones for people with dementia
Dementia together magazine: Oct/Nov 20

We hear how people with dementia and their families got along trying out three specially designed phones at home.

In our second consumer panel over Zoom, people affected by dementia in West Sussex told us how they’d got on with three different phones during the previous few days.

We sent them two kinds of mobile phone and a landline from Emporia UK that are designed to be easier to use, all available from our online shop. 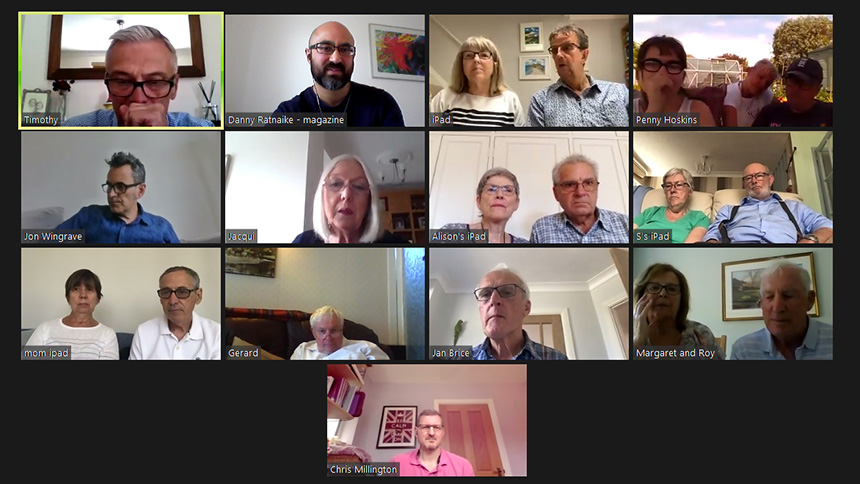 Emporia One is a clamshell or ‘flip’ phone that you open to make or receive calls. Most popular before touchscreens became common, it’s a familiar design to many.

‘Once Mick understood it was a clamshell (he’s used to an iPhone), he really liked it,’ said Chris. ‘It’s simple and the numbers are easy to read. The only problem was when texting, having to press a button three times to get a “C”.’

‘It’s not too big and quite simple once you’ve learned how to use it,’ added Mick.

‘You can see the time and date without opening it up,’ said Jan. ‘When you turn it on, it makes a noise and vibrates – good if people can’t hear or see very well. I like the emergency button on the back. If somebody fell over, as well as ringing someone it also attracts attention nearby.’

Ian, describing himself as ‘a bit of a technophobe’, said he’d had to get used to pressing a button a few times to type a letter. ‘It’s OK now, but it would be tricky if you’re a bit further down the line.’

Jan added, ‘I do think, if Ian had this in his pocket and needed to ring me quickly, that he’d do it more quickly than on his current phone.’

Everyone had problems with inserting the SIM card, which needed to be put into an adapter to fit its slot. Another Chris, from Emporia, said they’re making all their manuals clearer, and he wondered about including a slip with specific SIM card instructions inside the phone.

‘An addendum in the phone sounds like a good idea,’ said Roy. ‘When you’re about to make the action, it’s there in front of you.’

Margaret particularly liked the phone’s red colour when you open it up, though she would have preferred red on the outside too.

‘Handbags are generally black on the inside,’ she said, ‘so it would be easier to see.’

Emporia’s Big button phone is a landline with large numbers and spaces for photos on three speed-dial buttons.

Stan found it straightforward to get working. ‘We used one of the picture buttons and set up a number on it,’ he said. ‘It was extremely fast redialling the number.’

‘It was easy to make and receive calls, certainly,’ said Joan. ‘We found some of the instructions on the settings need to be clearer.’

They both liked how it looked, though Stan would have appreciated a longer cord.

‘When you pick the handset up, you’ve got to get within a foot or a foot and a half, otherwise you pull it off the table!’

Peter said, ‘I’m partially deaf, I do wear two aids. It’s often hard to hear what’s someone’s saying on the phone, but good on this.’

‘I like the idea of pictures of people on the buttons,’ said Lindy. ‘The look’s not my cup of tea, but it’s a good phone. I told my mum about it, she’s 94 and it’s ideal for her.’

John and Joyce agreed the volume was good on the handset, but said the hands-free volume was poor, which Chris from Emporia said they’d be looking into.

Joyce said, ‘It was easy to set up, OK to plug in – John did all of this. Then we decided to set the date and time, but it closes off a bit quick.’

‘Where it says the year,’ said John, ‘I thought it was the time.’

‘We did like photos and speed dial,’ said Joyce. ‘At some point of this journey it could be right for us, we’re not there yet.’

The Emporia Classic is a simple bar-shaped mobile with raised buttons.

‘It’s excellent, I like it very much,’ said Gerard. ‘I was given an iPhone a while ago and, I must say, I couldn’t get on with it. I’m going back to an old-style phone.’

Pleased that it could be used with any network, he added, ‘I certainly would recommend it to others.’

Paul said, ‘The phone was OK, but the digits on the screen were very small for me.’

‘The biggest problem for Paul,’ said Penny, ‘is that with his dementia, he’s very visual. He has a touchscreen and will only use icons. The menus on this phone were confusing for him.

‘A friend of ours is visually impaired, and she liked it because the buttons are a nice size for her to touch.’

The phone was a huge success for Gordon, especially compared to his current model.

‘I can’t say how glad I am,’ he said. ‘I’ve been trying my level best not to use my mobile phone. I couldn’t use it with thumbs or fingers, fingers over two keys, struggling one, two or three times.’

Alison added, ‘Gordon says he’ll give texting a go again. I like the charging bay, which means you know where you’ve put the phone. Perfectly happy.’

Our panel said that all three phones were good value – the Emporia One and Emporia Classic are both £41.67 excluding VAT, and the Big button phone is £33.33 without VAT.

Our online shop offers many products designed to help people affected by dementia to live well at home.

You don’t have to pay VAT on many daily living aids if they’re for use by a person with dementia or other condition – tick the box stating that you’re eligible for VAT relief at checkout.

More from Dementia together magazine: Oct/Nov 20:

Equipment and Technology, Communication
Back to top

Do any of these phones work with BTs Digital service (soon to be the only service available to everyone)? Will any of these phones work in areas where the Digital service is reliant upon the quality of the signal strength? My mums phone (connected to an adapter in order to use her old phone that she is familiar with) goes off when the signal strength dips and leaves her with nothing to contact emergency services.