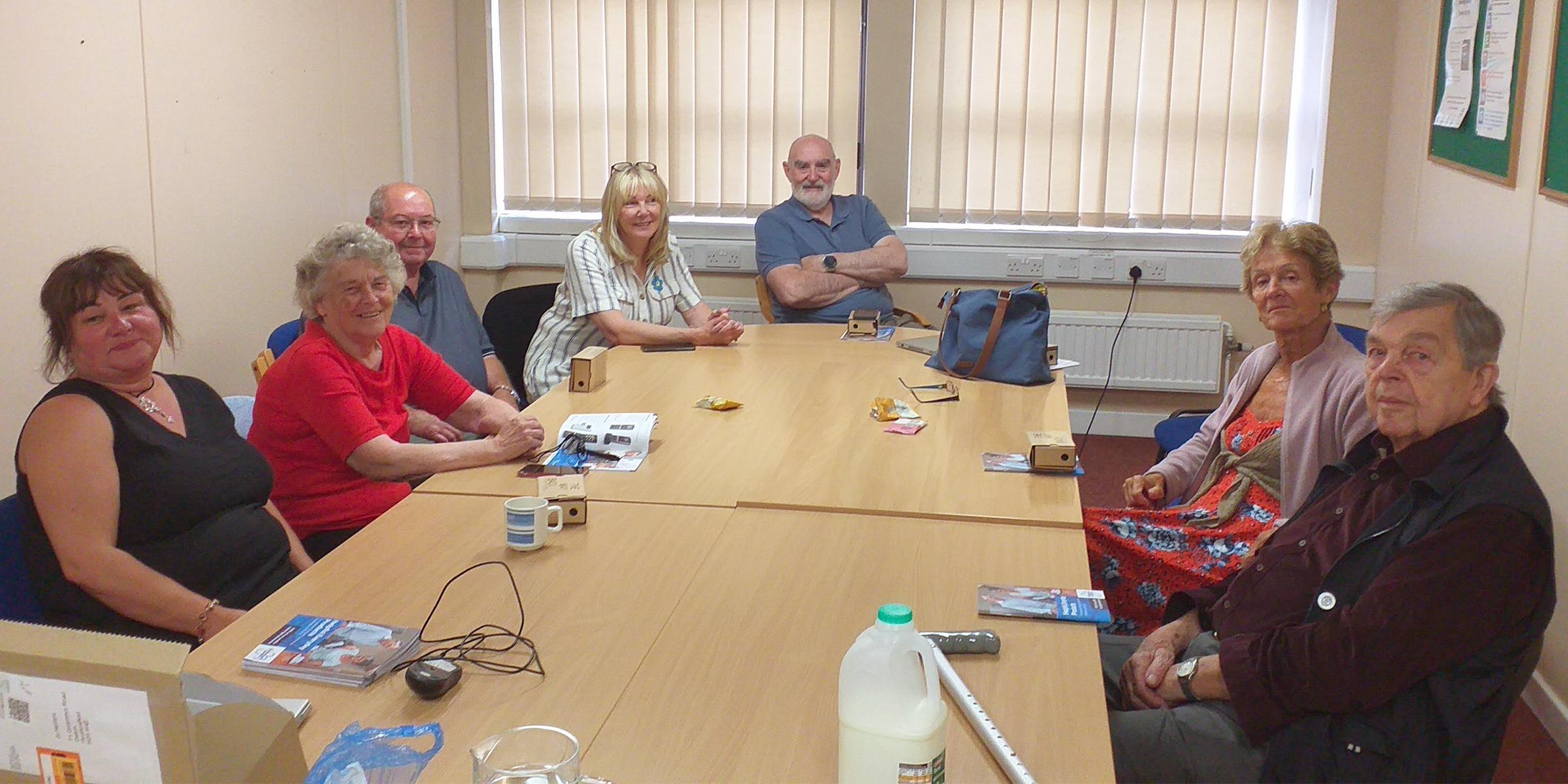 People with dementia try out some immersive virtual reality films and tell us what they’d like from a TV service.

We visited a group of people living with dementia in Wakefield that meets regularly to discuss topics and share their opinions.

The group heard about My Life TV, a streaming service that’s been specially designed for people with dementia, and talked about what they like to watch on TV. Then they tried out some virtual reality (VR) viewers to immerse themselves in reminiscence films from The Wayback.

My Life TV and The Wayback are both available through our online shop.

My Life TV is a video on demand service that’s been created for people with dementia to feel stimulated and connected to the world. It offers a mix of programmes for reminiscence, as well as a range of other interactive content. This includes specially created quizzes, chair exercises, poetry and Singing for the Brain sessions.

There are no ads, and you can watch it on a smart TV, computer or mobile device for £3.99 a month, which you can cancel at any time.

After hearing about My Life TV, the group discussed their favourite types of television programmes.

Ted said, ‘I enjoy watching old films about the 60s, especially in London where I worked then. The old films like The Lavender Hill Mob – I don’t want the violence that you get these days.

‘I enjoy looking, seeing no cars parked on the street and that sort of thing. London used to empty at the weekend. My wife was pregnant at the time and we used to go to Regents Park – it’s nice to reminisce.’

Ian said, ‘I watch motor sports, the news, documentaries. Soaps definitely not! They’re so unreal, I gave up on those years ago.’

Keith said he’s enjoying a documentary presented by Brian Cox about the universe at the moment.

He said, ‘I like history a lot, programmes where they’re going back through wars, going to places where things that happened in the war were notable.’

Claire, from our online shop, said, ‘I think you’ll be delighted by My Life TV when you have a go!’

The Wayback have produced 360° films of the Queen’s coronation in 1953 and England’s 1966 World Cup victory. Using a viewer attached to a smartphone, you can feel completely immersed in these events, looking wherever you want to explore.

With each film, there are different sections that place you in the middle of what’s going on. For example, the coronation film features scenes in a living room and kitchen before heading out to a street party.

Using the viewer, Keith said, ‘If I look up I can see the sky, and over there I can see a bloke cleaning a car! Up that way, there’s a whole body of people at a long table on the street.’

When Sandra looked around the coronation scenes, she was immediately prompted to share her own memories of that time.

Ian, who has a great deal of video production experience himself, said, ‘It’s a great mechanism to stimulate your brain and help you to recall history.

‘That’s very useful, and very often going over memories can be quite helpful in affecting and impacting mood.’

The group agreed that it would usually be best for someone to set it up for the person with dementia beforehand. This involves downloading an app and films onto a smartphone, and constructing the viewer from a fold-out piece of card. But once this is done, it’s simply a matter of looking through it.

Josie said, ‘It’s like looking at old photos,’ and several other group members added, ‘But better!’

We’ve arranged a special package with The Wayback that provides unlimited access to coronation and World Cup films for £64.99, including a free viewer, with 20% donated to the Society.

Equipment and Technology, Reminiscence therapy
Back to top