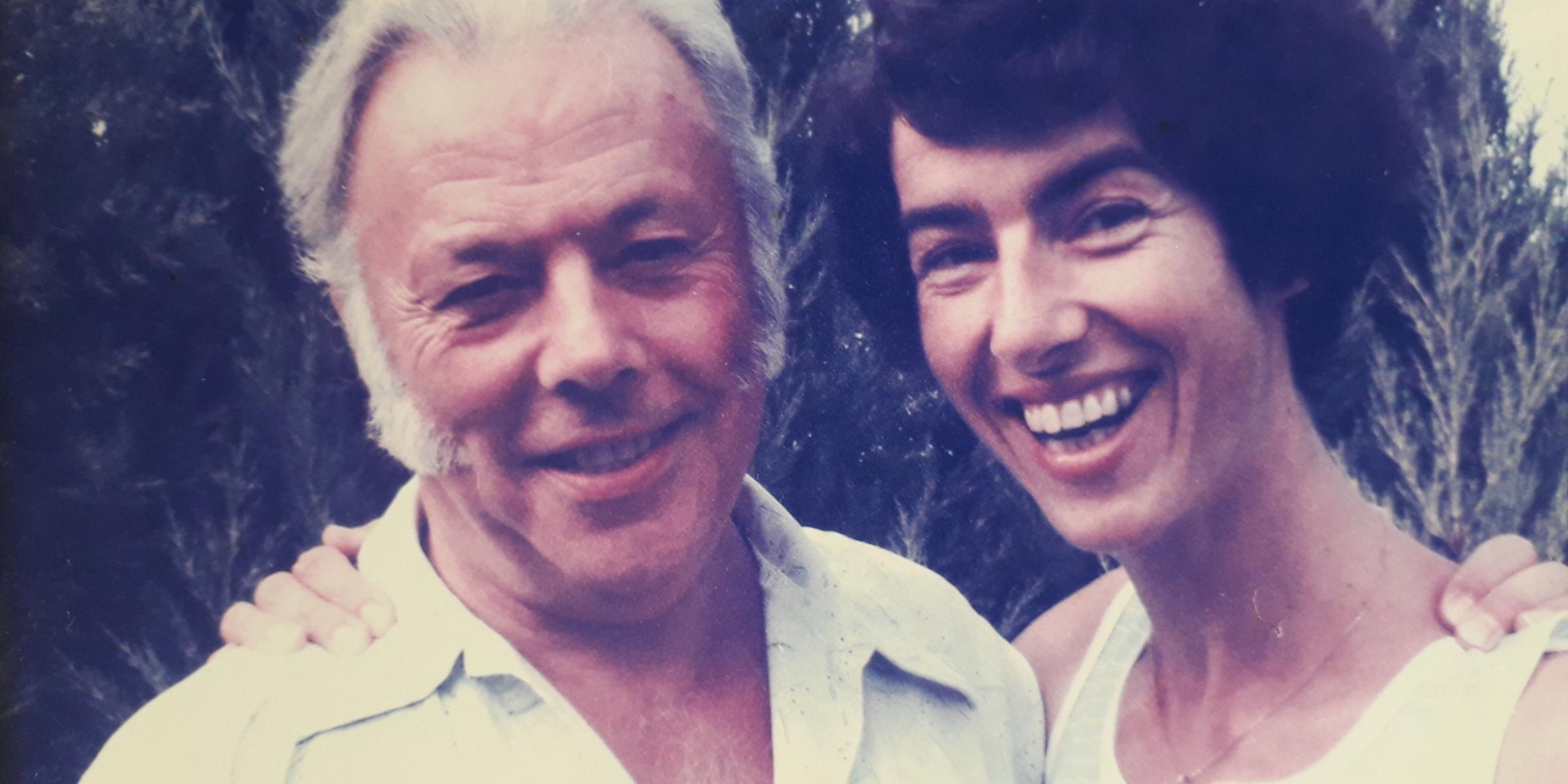 Real stories
Sylvia's story: 'Early diagnosis is part of the reason why I am able to have such a rich and full life'
Blog

Sylvia cared for her husband, Doug, who had dementia, for 13 years. She was with him at every stage including the moment he passed away. Now, she has been living with dementia for 10 years. She contrasts those experiences, and explains why she is such a passionate advocate of people going to their doctor to check out their memory.

Doug and I met at a Christian festival. We were slightly later in life compared to most couples. Maybe that was why our relationship was so special for me. We loved each other so much.

In 1991, just six years after we married, Doug started having vacant episodes and hallucinating. He found it increasingly difficult to communicate and was no longer able to even shave. It was frightening.

Seeking a diagnosis for Doug

The doctor referred Doug to a gerontologist who thought it might be CJD, or mad cow disease, as it was known then. We hadn’t heard of dementia and we had no idea what was wrong.

Five or six years later, Doug had epilepsy and Parkinson’s. He could no longer walk or talk. He was doubly incontinent. He had difficulty swallowing.

A specialist in London diagnosed cortico-basal degeneration of the brain and Lewy body dementia.

I asked if there was medication, but I was told that the medication, Aricept, had already been allocated and that there was none available for Doug. I paid for a private prescription.

It was too late. The drugs weren’t effective for someone with a condition as advanced as Doug’s.

Caring for Doug at home then moving to a care home

I was still caring for him at home. It was physically difficult caring for Doug – he sometimes fell out of bed, and I had to call an ambulance, because I couldn’t lift him myself. So I got a single bed downstairs in the lounge with safety bars along the side, and a baby monitor to wake me upstairs if I heard him.

A year later, I needed a hoist to lift him. But because it needs two people and I was on my own, I was told he now needed to be in a care home. I am so glad I didn’t need to make that decision.

The home was amazing. I was able to help with Doug’s care 11 hours a day. And I gave him that care every day – except one – for six years.

Then, Doug could no longer swallow, so I knew the end was near. I made every day very special for him and as the time drew near, I stayed with him for four nights sleeping on a duvet on the floor. And I was with him as he gave his last breath.

Experiencing my own memory problems

Just over four years later, I was having problems with my memory and was so shocked when I started hallucinating, losing my balance and sometimes falling.

I didn’t know my home. I used to get lost or forget words. Friends in the church would say 'Hi, Sylvia' and I would say 'Hi, sorry I don’t know your name', although I had been going there for over 25 years.

Why have an assessment for dementia?

Find out why it is important to have an assessment to test if you have dementia, and the benefits of receiving a diagnosis.

It was December 2009, and after tests, I was diagnosed with Lewy body dementia about four months later.

I am passionate about breaking the stigma associated with dementia. So, the Sunday after I was diagnosed, I went forward in Church, and told everyone. The contrast with Doug’s experience is sharp.

Through Alzheimer’s Society, I was put in touch with people who, like me, had dementia. Those friendships mean so much to me.

The professionals at Alzheimer’s Society arranged meetings and care cafes where we encourage and support each other.

I am grateful I have a form of dementia which can be helped by medication. Initially, I was on Aricept for the first three months, and since then on Rivastigmine patches and Memantine tablets.

My dementia has progressed. For instance, ten years ago, I could drive. I could ride a bicycle. I cannot do either of those things now. I dare not use the oven any more. I need to put notes up on everything.

The importance of an early diagnosis

Although life with dementia is more of a struggle now, I still live on my own and care for myself. I keep as well as possible. I eat healthily and do exercises, cycle everywhere on my tricycle, swim, do brain games, like sudoku  and children’s crosswords. I see friends and neighbours almost every day and I have a small allotment.

I truly believe that early diagnosis is part of the reason why I am able to have such a rich and full life as I do now.

I am passionate about encouraging elderly folk who say they’re getting memory problems, to go to their doctor. There, they will do a mini memory test which will show whether it is part of the ageing process or whether further tests are needed.

If it is one of the dementias that can be treated by medication, it will make a big difference to the qualities of one’s life.

If you are worried about your own memory, or that of someone close to you, it's important to see a doctor. Find out more about memory problems and what you can do to help yourself or someone you are concerned about.

Get advice about memory problems

Worried about dementia, Assessment and Diagnosis, Dementia with Lewy bodies
Back to top

Very helpful post. My husband was diagnosed with dementia last year - the unknown is scary but I’m just finding out what help is available. My son, aged 41 died from a cardiac arrest last year - this is like another bereavement but feel blessed to have good church support. Irene

My mums just been diagnosed with early dementia she’s only 62. I’m so scared for what’s going to happen, I need to understand more to be able to help her, but at the moment all I keep thinking is the worst and she is my world xx

Thanks so much for sharing your moving story. So thankful your information about medications and early detection. My husband is having problems, and hopefully it is early stages of DLB.

God bless you! What a difference you are making.

Please l need the support at the court of protection to get my husband back home for his care he is in late dementia and l know he would not choose to be in this loud busy home he needs a calm, safe place the home he loves the family and love of his wife with the right care package . The home is now the wrong place to end his time and we are a very close couple he needs me by his side l have tried to be his voice but the authorities are stopping this .the court has to decide .he is settled and l can't understand why they do not welcome this .I am having to fight them all the way

What a brave lady you are. I am so pleased your church network is supporting you as well as Alzheimer's UK. I have experienced lewy body and Parkinson's dementia with friends and family and totally agree that an early diagnosis is vital. I will pray that you continue to stay as strong as you can. May God bless you.

Thanks Sylvia for your sharing especially your powerful message of getting early diagnosis in order to continue living well. I would love to get connected with you. I am working with Alzheimer's association of Singapore and hospitals on this issue. I would love to hear from you, Slyvia

Hi Emily, my name is Jack Enright, and I am Stories Manager for Alzheimer's Society. I have spoken to Sylvia about your message. She first of all wants to thank you and everyone else for leaving messages. Secondly, unfortunately Sylvia does not use the internet or email I am afraid, and therefore, regretfully, she cannot get in touch with you. Yours sincerely, Jack

Reading your Post was almost like reading about my life over the last seven years. My husband , like yours was diagnosed too late for any medication to help. He is now in the very final stages, looked after in a care home with me here with him every day. Couldn’t agree more that early diagnosis is vital so that anything that can help people enjoy some extra time is beneficial to them. I wish you the very best. Jackie