Watch this short film about Posterior Cortical Atrophy (PCA) and read Lori's story about noticing the signs of PCA in her husband, John.

It’s common knowledge that dementia is affecting an ever growing number of people in the UK.

A small proportion of those people are living with a rare type of the condition known as Posterior Cortical Atrophy (PCA) which famously affected the author Sir Terry Pratchett.

In this blog post, we share a beautiful short film that narrates the experiences of people living with PCA funded by Created Out of Mind and Alzheimer’s Society and directed by Simon Ball.

Find out more about this little known type of dementia and hear from Lori, a carer to her husband John who is living with PCA today.

What is Posterior Cortical Atrophy?

Posterior Cortical Atrophy (PCA) is a rare neurodegenerative condition that resembles Alzheimer’s disease but targets different areas of the brain, particularly at the early stages of the condition.

Often people with PCA have difficulty recognising people and objects and can struggle with reading, writing and numeracy.

These skills are controlled at the back of the brain which is the first area affected in PCA.

Typically people living with PCA have a relatively well-preserved memory but as the condition progresses more typical symptoms of Alzheimer’s emerge such as memory loss and confusion. It tends to occur in those in their late 50s and early 60s.

Lori and John along with others affected by PCA featured in this powerful short film. The film beautifully illustrates the visual problems that are so common in those with PCA.

We spoke to Lori about her experience of caring for her husband John who was diagnosed with PCA in 2014.

What were the early PCA signs that you noticed in John?

For a good twelve to eighteen months before his diagnosis, I noticed subtle changes in John.

As these changes coincided with John’s retirement and also stopping smoking, we put some of it down to that.

John was always a brilliant driver and suddenly started to hit the curb and wasn’t able to park properly.  He also seemed unable to discern lights and signs at night.

I started to notice other changes in John which were out of character.

John is meticulous in everything he does but when I came home and he said he’d been filing – I discovered his version of filing was taking a variety of important papers and putting them in the bin.

The biggest change was that John started to put everything in one drawer. He said that it was easier to find things if everything was in the same place. That's when I knew something was up.

What challenges have you and John faced together?

The first challenge was getting a diagnosis as John could still articulate himself well and had no awareness that anything untoward was going on.

When he was diagnosed we were shocked. I didn't even know the difference between Alzheimer’s and dementia, let alone know what PCA was.

Our biggest challenge was to not be defeated when we learned that the future we had planned had disappeared. We had to find a way to accept advice and support and take small steps to creating a new journey for ourselves.

How have you coped with these challenges?

Alzheimer’s Society was key in providing us with information and steering us to who to speak to. I immediately signed up with the local council's carers agency so that we could have their support and advice which was invaluable.

Through them, we learned about applying for Attendance Allowance, Power of Attorneys, and planning for the future. They even ran courses on how to keep our flat safe and dementia-friendly. 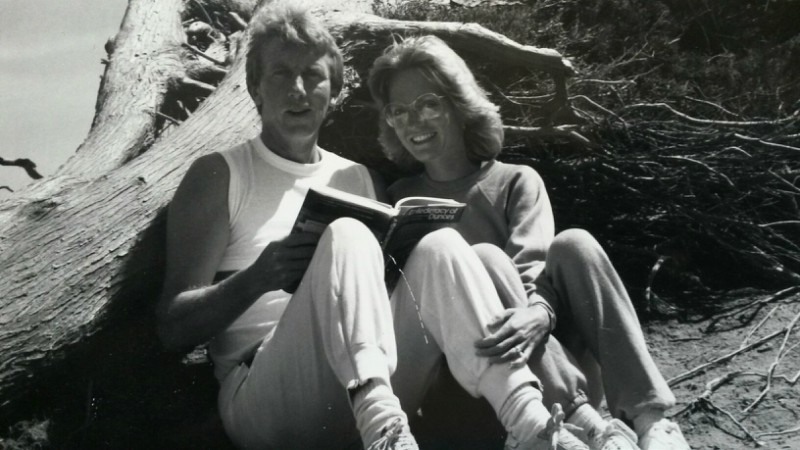 We attended a number of invaluable support groups to meet others who had just been diagnosed. At the PCA Support Groups, we not only met other people with PCA for the first time but met wonderful people working to bring more awareness of PCA to the public.

Although all of these services and support groups were a great help, there was one other thing that got us this far.  It was us and our attitude. I tried to keep positive - if I was happy John was happy.  I tried to get us involved in things that would enhance our journey and let us share it with others in the same situation.

We have kept active by attending dance classes at Ballet Rambert, cycling on Clapham Common with Positive Spin, Singing for the Brain in Balham, and attended programs sponsored by Arts4Dementia.

We have met wonderful teachers, volunteers and people living this journey. All I know is that since his diagnosis nearly 4 years ago, we have come a long way.

Seeking and accepting advice and support along the way has been vital. I have found taking part and sharing the way with others has made all the difference.

What advice would you give to those newly diagnosed with PCA?

Take a deep breath and reach out. Do not be afraid, someone is there with help and advice. 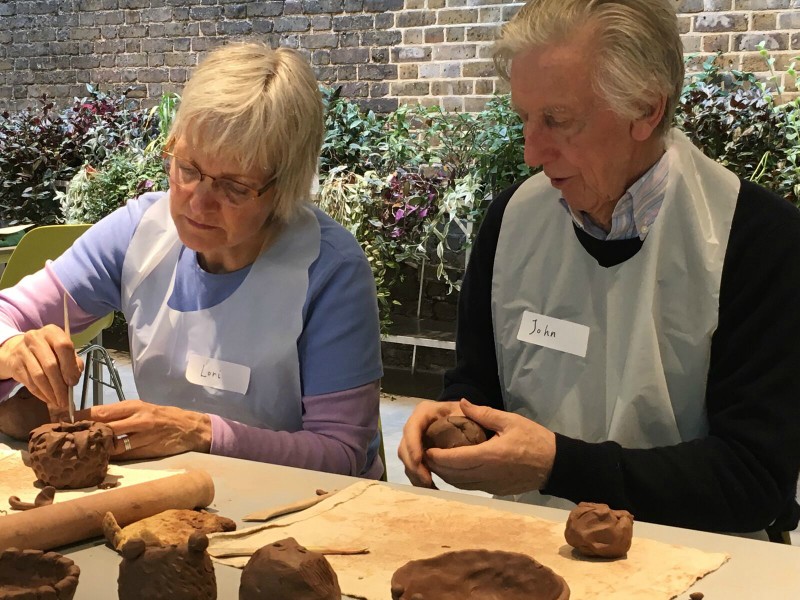 We have attended a range of events organised by Arts4Dementia including pottery and ceramics classes. Your neurologist should appoint you a dementia nurse who you will be able to guide you and answer your questions as you start this journey.

Join a carers and a PCA support group to meet others in the same situation.

You can always find support with Alzheimer’s Society and from your local council carers centre. On a practical note it’s important to get things in place early like power of attorney so you'll have it ready for the future.

If you've written a dementia story, we would love to hear about it. Please contact our Blog team if you're interested in telling us about your experience: [email protected]

My husband was diagnosed with Posterior Cortical Atrophy in May, 2019. Through group meetings at the Alzheimers Society, soon after his diagnosis, all of us, including sufferers, were told at the group meetings too apply for Attendance Allowance. My husband applied with help from Age Concern. He was refused as not needing enough care. His Dementia Support Worker was insistant he should be entitled to have it. I appealed the decision earlier this year, but my husband was still refused Attendance Allowance. I do still work part time. He is retired, but as I said to the person dealing with the appeal, my husband struggles to complete a lot of tasks. It appears that because he can shower, unaided, he isn't entitled to Attendance Allowance. He wouldn't be able to hold down a job if he was working age. Can someone advise me why the Alzheimers Society are adamant someone with a PCA diagnosis is entitled to Attendance Allowance, when obviously they are not. Hope we get some clarification on this subject.

Hi Rachel,
Thank you for your message.
Many people with dementia will be entitled to Attendance Allowance (or Personal Independence Payment if they are under state pension age) at some point in their dementia journey. Eligibility for Attendance Allowance is based on a person being physically or mentally disabled and needing help with personal care or supervision to remain safe. The Department for Work and Pensions (DWP) guidance on completing the Attendance Allowance forms details what is meant by personal care or supervision on page five: https://assets.publishing.service.gov.uk/government/uploads/system/uplo…
People with dementia often reach a point where the attention they require is frequent enough, or the supervision they require is continual enough, to meet the eligibility criteria.
However as everyone experiences dementia differently, we cannot guarantee they will definitely qualify or when they will qualify.
Attendance Allowance is solely based on a person’s needs, the income or savings of the person with dementia (or their partner) are not taken into account. Eligibility is also not based on their ability to work or not. For more information on Attendance Allowance and other benefits, please see our factsheet: https://www.alzheimers.org.uk/sites/default/files/2019-03/Benefits%20fo…
You will see in our factsheet that we do try to be careful with our wording, stating that people ‘may’ qualify and ‘often’ qualify but giving no guarantees. Apologies if the DSW you spoke to did not manage your expectations.
If you feel your husband’s needs increase in the future, it may be worth applying again.
Lastly, if you would like to speak with a dementia adviser for any further information or advice, please contact our Dementia Connect support line on 0333 150 3456. They will listen to your situation and provide you with support. (More information on opening times: https://www.alzheimers.org.uk/get-support/dementia-connect-support-line)
We hope this has been helpful.
-
Alzheimer's Society Knowledge team

Thank you for your reply. Just wanted to let you know, we reapplied for a second time for Attendance Allowance, and my husband was successful that time.

Thank you. My Partner was recently diagnosed with PCA and I now realise the challenges we both face. I think she is currently between stage 4 and 5. I will do my utmost to give her the best possible life but realize it is a fight we will both ultimately lose. For now we are like sponges, soaking up every bit of information and knowledge we can get. I know that I must be stronger than I have ever been, for her, and perhaps for myself too.

I have PCA.. diagnosed two years ago.. it isn't a 'journey' as people will so condescendingly call it.. it's a slow and insidious decline which needs to be managed as well as it can be.. unfortunately help would appear to be virtually non-existent where I live.. as I have said from day one 'if I had diabetes or cancer, medics would be all over me like a rash' and they have agreed.. this condition needs national high-lighting.. we lost our champion when it claimed Sir Terry Pratchett.. now we need voices who aren't going to fade away as we surely will..

My husband John was diagnosed withPCA in2004. Over the years he has got worse. New year this year he was taken into hospital with urinary & chest infection. He is now in nursing home as the hospital would not let him come home as it takes three people to care for his incontinence. He lost his speech & couldn't feed himself.He gets very disturbed when being moved. clinging on to nurses arms.Is this part of PCA?

Hi Elizabeth, I’m so sorry to hear that John has been having complications recently.

Unfortunately this is quite typical of the more advanced stages of PCA. By this time the disease has moved out of the occipital lobes, where it initially causes problems with visual perception, and has spread throughout the other regions of the brain. This makes it very much like the more common forms of dementia, such as late-stage Alzheimer’s disease, in which both physical and cognitive symptoms are wide-ranging and often quite severe.

The best resource for describing the various stages of PCA is that provided by Rare Dementia Support, who have written a guide of the seven stages of PCA:

Thank you! My wife Valdeana has struggled with progressing PCA for more than 18 years.

Activities are such a help to both sufferers and carers and in these days when local authorities are not always able to provide funds it is important for the Alzheimer's Society to allocate budgets to keep activities like 'singing for the brain' going and maintain the support folks need.