Information
Hear our voices: People with dementia in their own words
Blog

Gareth Bracken, from our Dementia together magazine, tells us more about listening to people with dementia tell their own stories in our audio interviews as podcasts. 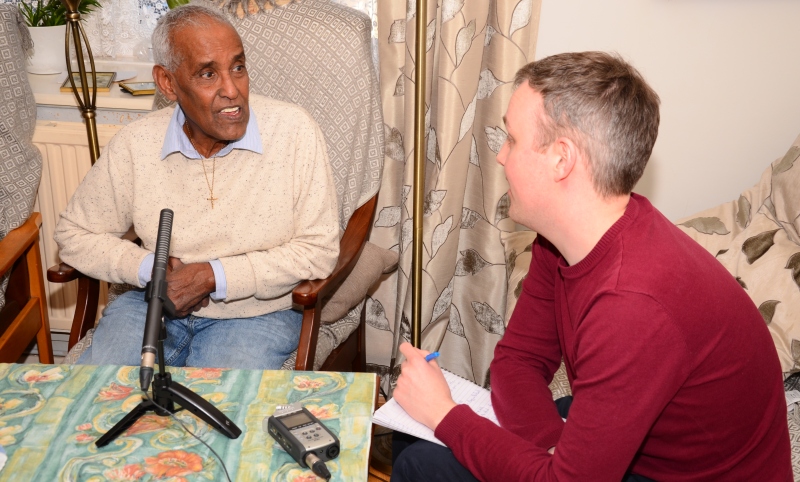 Every issue of our magazine, Dementia together, includes the voices of people living with dementia. They share their often very personal stories with you – their hopes and fears, challenges and victories. We’re continually humbled by how bold, open and honest they are, all to support others and raise awareness.

We always want a person’s true voice to come through in our articles. We recently took this a step further by literally including their voices in our new-style podcasts.

These audio interviews mean you can hear the person we’re speaking to in their own words. You can either play them online or download and listen to them later.

The first of these features Avril Staunton, a former senior consultant who was diagnosed with atypical early-onset Alzheimer’s in 2015.

‘It’s new territory for me, to be more unsure of myself,’ you can hear her say. ‘I’ve never been unsure really, ever – even as a very small child.’

Powerful words in print, but hearing Avril speak them makes all the difference.

Martin Anderton, 62, has posterior cortical atrophy, a rarer cause of dementia that damages the rear of the brain first. His interview captures his vibrant personality and the strength of his friendship with volunteer Andrew, who supports him through our Side by Side service.

Abdul-Fady Othman has overcome alcoholism, schizophrenia and cancer. Now he is living with Alzheimer’s. Abdul-Fady’s personality really comes across as he jokes about his childhood experiences. But you can also hear the strain that his mental health issues caused.

You can hear Chris Maddocks speak to us in our most recent interview, which is something of a love story. She recalls her partner, Heather, suggesting they move in together after Chris’s diagnosis with young-onset vascular dementia.

‘I couldn’t believe that somebody loved me and cared for me enough that they would be prepared to look after me. I think it’s a huge sacrifice.’

Our audio interviews are an enjoyable way to listen to people’s real-life experiences if you can’t read our articles in print, whether because of dementia or another reason.

They’re also for anyone who wants to hear people with dementia speaking in their own words. Why not start listening to them today?

Dementia together magazine
Back to top

People with dementia face many challenges in their life and we have to support them. Your audio series will help many people who are unable to read and write.

How can I get your magazine???

My wife has Dementia.

Thank you for getting in touch.

You can sign up to regularly receive the magazine, either for free, or by making a donation to support our work. Once you've subscribed, you'll start receiving your magazine in the post every two months, packed with real stories, features and advice for people living with dementia: https://www.alzheimers.org.uk/get-support/publications-and-factsheets/d…

Alternatively, you can download the latest issue from the magazine homepage as a PDF file: https://www.alzheimers.org.uk/get-support/publications-and-factsheets/d…

Lastly, if you require any information, advice or support about dementia, please do contact our National Dementia Helpline on 0300 222 11 22. The opening hours are here: https://www.alzheimers.org.uk/get-support/national-dementia-helpline

We hope this is helpful, Patrick.