We report on Dementia Connect, a new service being developed to keep in touch with and support people affected by dementia. 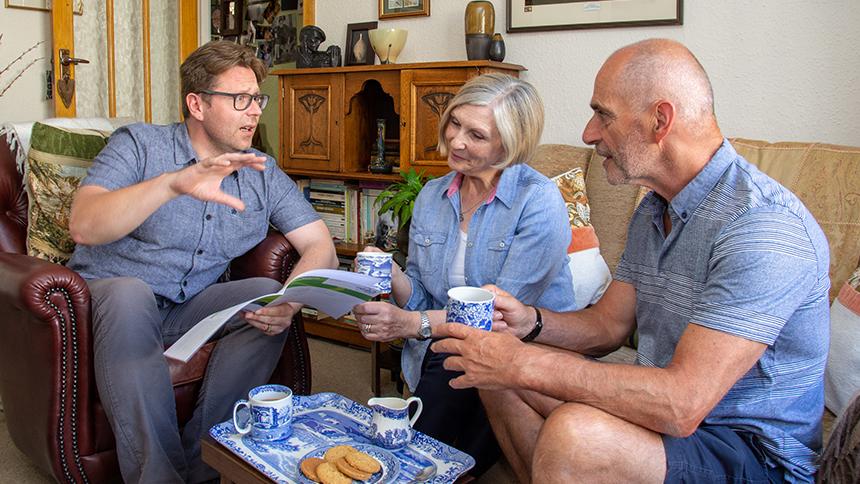 As part of our current strategy – the New Deal on Dementia – by the year 2022, we want to be there for everyone affected by the condition to offer information, advice and support.

We’re introducing a new service called Dementia Connect to cut through the confusion and delay that people often face in finding the right local support.

Dementia Connect combines face-to-face support with telephone and online advice, so people can get the help that they need, when they need it. To make sure we’re developing it in the right ways, the service is being adopted in a couple of areas initially.

The first is Pennine Lancashire, which includes Burnley, Hyndburn, Pendle, Ribble Valley and Rossendale. Here, specialist dementia advisers are assessing and addressing the needs of people who either contact us themselves or who are referred to us.

This begins with an initial phone call, which can lead to face-to-face visits or connections to other services as and when required. There are also ‘keeping in touch’ calls, where we contact people after an agreed amount of time to see how they’re getting on.

Dementia Advice - help for people with dementia and their families

Find out what Alzheimer's Society Dementia Advisers can do for you.

‘Some people want support early on, while others need the bigger picture – information about what might happen in future. We’re here for both.

'If things change, we're also here. They already know who we are and the relationship is there. It’s just keeping that connection with people.’

In December 2016, Adrian Ferguson’s mother-in-law, Eileen, was diagnosed with mixed dementia – vascular dementia and Alzheimer’s disease – and his father-in-law, George, with Alzheimer’s.

‘It was just a relief to talk to someone who understood what we were going through,’ says Adrian.

‘We just sat in a room with the psychiatrist, got given a handful of leaflets and basically got told, “You’re poorly – bye,”’ he says.

After contacting us, Adrian was visited at home by Sarah, who came with a list of the obligations that social services had to the family and some valuable advice.

‘It was just a relief to talk to someone who understood what we were going through,’ says Adrian.

‘My wife and I used to get frustrated but we’ve never fallen out with them – that’s from Sarah.’

Sarah has also supported Adrian and his wife on the phone during difficult times, like when George was in hospital.

‘We would have been in dire straits without Alzheimer’s Society,’ says Adrian.

Community Support - for people with dementia

If you’re living with dementia and want to stay active and healthy and keep doing things you enjoy, we can help.

Katherine Donnelly, now 66, was diagnosed with early-onset Alzheimer’s in September 2016.

‘From the day of diagnosis, there was someone there,’ she says.

Katherine and her husband, Matt, have received both phone and face-to-face support that has armed them with new knowledge.

‘We’ve now done a power of attorney, which we wouldn’t have known about,’ she says.

‘There was also information about making your home dementia friendly, which will be useful in future.’

‘It’s just knowing there is someone out there who you can talk to who understands,’ says Katherine.

‘My philosophy from day one has been positivity and determination to live well with dementia, so this has been really helpful for me.’

Get help from Dementia Connect

If you are based in East Lancashire, Blackburn with Darwen, Birmingham and Solihull, or Wales, you can use our Dementia Connect pilot service.

Support
Back to top

Im caring for my mum and dad . Dad is ok but mum has nearly no memory and she gets emotional. There is only me for them and i do everything for them. Its getting really hard as i have to work !!

My husband has Alzheimer's and he seems to be deteriorating, he now gets confused in our own home as to where different rooms are eg toilet, kitchen etc

I’m looking after my Mum who has Alzheimer’s. The last 3 months she has deteriorated very quickly