New analysis published today (Tuesday 9 July) by Alzheimer’s Society reveals people living with dementia have had to spend almost £15bn of their own money on social care since Government reforms were first promised in March 2017.

Alzheimer’s Society’s shocking analysis builds on a damning picture supported by a number of emerging reports including the new ADASS budget survey, and Healthwatch dementia care review report. All the evidence shows that, since the promise of the Green Paper on social care reform in March 2017, the dementia care crisis has reached absolute breaking point – and is financially punishing people with dementia, their families, and the NHS:

In the two year period, the total number of people over 65 diagnosed with dementia has increased by 33,000 in England, adding significantly to all those struggling to get the dementia care they need. Alzheimer’s Society has organised a photo exhibition of 12 families in Parliament today exposing the appalling reality so many families affected by dementia across the country face. Including stories of a woman who has had to ask passers-by to come into her house to help her lift her husband off the floor, and a woman who couldn’t leave hospital because she still didn’t have a care assessment after a year of waiting, the exhibition reveals the awful circumstances people find themselves in due to the failing system.

One person attending today is Phillip Scott, whose photograph is featured with his mother Sylvia. Philip Scott, 59 from London, said:

'When my Mum was diagnosed with dementia at 82 she received little support from health professionals, and my sister and I did not receive any guidance on what was to come.

'After social services moved her into a care home it was only paid for by the local authority for the first six weeks. After that my Mum had to become self-funding for her care.

'After all of my Mum’s savings were used up, we had to use the proceeds from the sale of her home.'

'It took three attempts before we managed to get Continuing Health Care funding for her. The whole process of having to argue again and again why my mum needed support was really harrowing. Even now, they have come back several times to reassess her, and we are afraid that the funding will be taken away. In total we have spent around £160,000 on my Mum's care.'

People with dementia are faced with higher costs for their care, costing an average 15% more than standard social care. Typically, people with dementia spend £100,000 on their care, yet if you develop cancer or heart disease your care is covered by the NHS. The inequity and injustice of people battling to get quality care, and get it at a fair price, on top of battling the devastating effects of dementia, can’t go on.

'This shocking sum of money spent by people with dementia over the last two years trying to get access to the care and support they desperately need is utterly unacceptable.'

'And the amount and quality of care they’re getting for it – those who can afford it - just isn’t good enough. The results are people with dementia and their families falling victim to this dreadfully broken system.

'Like the families in our exhibition, hundreds of thousands of people affected by dementia in this country are facing financial punishment, just because they happened to develop dementia and not some other disease. The evidence of the gross inequity continues to pile up, and yet still the Government does nothing.

'We need an immediate cash injection through a dedicated Dementia Fund, while the Government works out a long term solution to finally end this crisis in care. With diagnosis rates of dementia at an all-time high, action can’t come soon enough.'

Alzheimer’s Society is calling for urgent investment in a dedicated £2.4bn Dementia Fund to end the dementia penalty people face when paying for care. The Dementia Fund would sit within the NHS - Alzheimer’s Society recommends that the money for the fund should come from the so far £3.5bn unallocated funding for community care attached to the NHS Long-Term Plan. The Fund would cover the additional social care costs people with dementia are asked to pay because of the complexity of their health condition.

Since the announcement of the social care Green Paper in March 2017, there have been six delays to its release. The document is promised to lay out a long term funding solution for the social care crisis, but there is still no sign of when it is due to be published.

How to deal with debt when someone has dementia

Information
Advice about what you can do if a relative or friend who has dementia has built up debts.
0
Information

Support and care for people with dementia at home: A guide for homecare workers

This book gives specialist knowledge on the different aspects of providing dementia care in someone's own home. 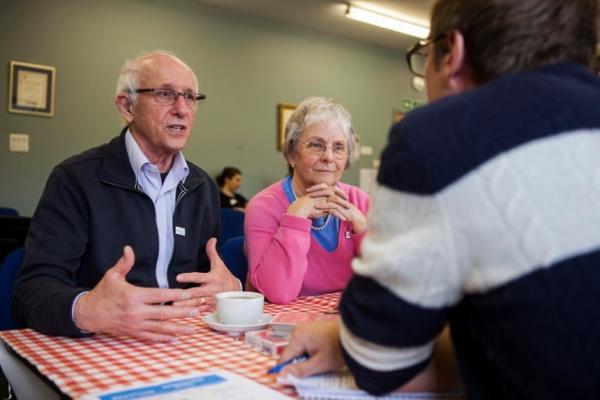 Personal Budgets can help provide choice and control for people with dementia, which is a legal right. Following the Care Act 2014, personalisation is a key part of the social care agenda.

What we think about NHS Continuing Healthcare and how it relates to the needs of people affected by dementia.

When does the NHS pay for care?

This booklet explains what NHS continuing healthcare is, who can get it, how assessments are carried out, and what to do if it is not awarded.

What we think about personalisation in care and how it relates to the needs of people affected by dementia.