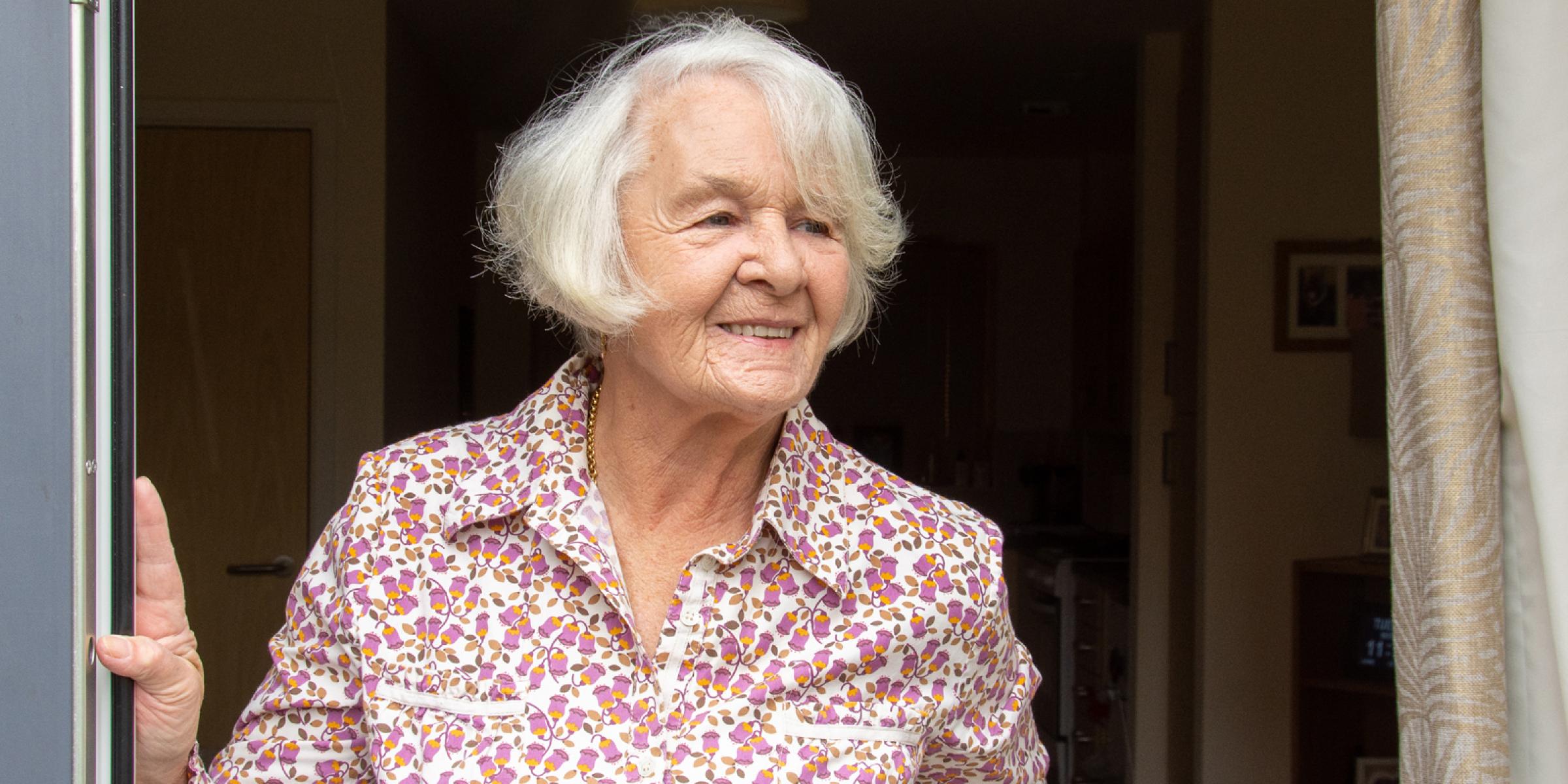 Real stories
How I am now: Embracing the unexpected
Dementia together magazine: Aug/Sept 19

Stunned by her dementia diagnosis, Margaret Willis had to battle her fears to reach a point of acceptance.

‘I’ve always been a positive person – that’s what helped me get through this,’ says Margaret Willis, reflecting on a challenging three years since her unexpected diagnosis of vascular dementia.

Initially shocked by the news, Margaret has strived to accept and even embrace her situation as best she can, an approach made possible by the strong support she’s received from Alzheimer’s Society.

Press the orange play button to hear this story in Margaret’s own words:

Although living in Flint in North Wales, 77-year old Margaret is originally from the north west of England – she was born in Blackpool and grew up in Bootle, Merseyside. A mother of five, she ran pubs with her late husband Ron in Liverpool, Carlisle, Manchester and London.

‘I wasn’t one of those landladies sat at the side of the bar, I was there pulling pints,’ she says. ‘I loved it. There was a social side and it was just full of life, plus I could be there for my children 24/7.

‘I insisted on a good service and good manners. I was quite bossy!’

Margaret was also the first female bingo caller in Liverpool and at one point owned and ran her own taxi business.

‘I was always happy with a microphone in front of me!’ she laughs.

Vascular dementia: what is it, and what causes it?

Vascular dementia is the second most common type of dementia (after Alzheimer's disease), affecting around 150,000 people in the UK. Find out more about vascular dementia and what causes it.

Although she was experiencing some memory problems a few years ago, Margaret put it down to old age and didn’t seek any professional advice.

Things took an unexpected turn when she visited the hospital with an ear problem. A consultant there sent her for a brain scan, which showed that Margaret had at some point experienced a mini-stroke and now had vascular dementia. However, she thought she was given her diagnosis in a frustrating and roundabout way.

‘The biggest bombshell was the way I was told,’ she says. ‘After the scan, the consultant asked me how I’d got there. He said, “You drove here?!” Then he told me to bring a family member along next time. But because I wasn’t aware of anything the matter at this stage, I’m thinking, “This fella is an idiot – why is he asking me all these questions?”

‘I asked for the results of the scan, but he still wasn’t really telling me. He was mumbling on about everything, so I asked him to write it down. I got into the car and read this word “dementia”. It was like my world had ended.

‘I hadn't smoked for years, but the first thing I did was stop at the garage and get a packet of cigarettes.’

The diagnosis caused great worry to Margaret, who not long afterwards got low scores on a test at a memory clinic.

‘You get your good days and bad. Some days I don’t want to see anybody, so I just stay at home,’ says Margaret.

‘I thought I’m not going to know my kids, my friends, my grandchildren. This is what’s going through your head,’ she says.

Dementia can cause Margaret confusion and frustration when doing everyday tasks. She has put food in the fridge instead of the oven and put clothes on back to front. She has also struggled with sense of direction, fatigue and a loss of appetite.

‘You get your good days and bad,’ she says. ‘Some days I don’t want to see anybody, so I just stay at home.’

Volunteer with Side by Side

Side by Side is our fun, friendly, super-flexible volunteering opportunity for someone like you to help someone with dementia. Sign up today and get ready to make a difference – to their life and to yours.

Margaret has received valuable support from Alzheimer’s Society, in particular David Allmark, a Dementia Support Worker who has developed strategies to help her cope with the challenges of the condition.

‘I’d make a cup of tea and forget to drink it, or leave windows open, but David made me laminated cards with reminders,’ she says. ‘It gave me the confidence that I wasn't forgetting as much.

‘He was able to reassure me that something like forgetting my family isn’t going to happen overnight.’

Margaret is also supported by a volunteer, Nerys, as part of Side by Side, our service that helps people with dementia stay active and involved.

‘I absolutely love her to bits – she’s like my best friend now,’ says Margaret. ‘We’re like teenagers, going out and buying clothes!

‘She picked me up an awful lot, because at the time I was really low. She just uplifts me.

‘The difference these people can make to someone with dementia is amazing.’

The Society has also supported Margaret with her power of attorney arrangements and helped her find new accommodation last year.

‘Alzheimer’s Society have been marvellous, I couldn't fault them,’ she says.

Margaret now lives in sheltered accommodation, in a complex that has staff on call day and night.

‘I try to stay independent but I’ve had major surgery and could become very ill, so I was glad to come here where someone is there for you at the press of a button,’ she says.

‘It suits my needs. If I want to go out or talk to people I can, if not I can stay here. My meals are cooked for me and I feel safe and secure, whereas I didn’t before. What more can I ask for?

‘It’s been absolutely brilliant – the best move I’ve ever made.’

‘Wherever I go, Milly comes with me. She has become a service dog,’ says Margaret.

Margaret has a supportive network of friends and family who she sees regularly, but it was particularly important that her beloved dog, an 11-year old pomchow named Milly, was allowed to join her in the new home.

‘Wherever I go, Milly comes with me,’ says Margaret. ‘She has become a service dog. She takes me home and she understands every word I say. I know she would fight to the death for me.’

Although she still has difficult days, Margaret tries to be as positive as possible about living with dementia.

‘Getting the news was a blow, for the first six months it was really bad,’ she says. ‘But then I realised that if I was more positive and didn’t let it get a grip, I should be able to lead near enough a normal life.

‘I’m trying to just embrace it – it's the only way that I feel I'm handling it.’

This approach has seen Margaret speak about her Side by Side experience at events and conferences. She is also a member of the North Wales Dementia Friendly Reference Group, helping to make Flint more dementia friendly.

She has benefited from hearing other group members’ experiences of living with the condition.

‘Flint is very dementia aware and dementia friendly. The shopkeepers have contributed to that,’ she says. ‘Some people elsewhere aren’t so understanding, although when people know I have dementia they’re really good – it’s about opening up.’

‘It’s nothing to be ashamed of. When you get over that bit you can embrace it – this is how you are, this is you now,’ says Margaret.

For Margaret, this has meant learning to accept her situation.

‘It’s nothing to be ashamed of,’ she says. ‘When you get over that bit you can embrace it – this is how you are, this is you now.

‘There's also nothing I can do about it other than try and manage it the best way I can without it causing too much stress.’

Chance of a lifetime

One area of lingering anxiety is the possibility of Margaret one day not recognising her children.

‘Although I’m not going to know anything about it, I do worry,’ she says. ‘It must be heartbreaking for a daughter if their mum says, “Who are you?”’

Right now though, Margaret is very excited about a forthcoming holiday to China with her daughters.

‘I was always a great organiser but I’m not anymore, so I’ve told them, “Just book it!”’ she says.

‘It's the chance of a lifetime – I’m not going to stop living because I’ve got dementia.’

Side by Side, Vascular dementia, Wales
Back to top

Margaret, Have a marvellous holiday in China with your girls. Thank you for sharing your story. Acceptance is the hardest of self preservation emotions, whatever the disease or disability. Once you accept your lot you can create a new way of living and that positivity is very uplifting to smile and laugh again. All the very best Margaret Willis x

Well done Margaret enjoyed reading your story,my husband was diagnosed six months ago,tried to persuade him to buy a dog 🐕for interest and exercise had no luck yet,no two days are ever the same.