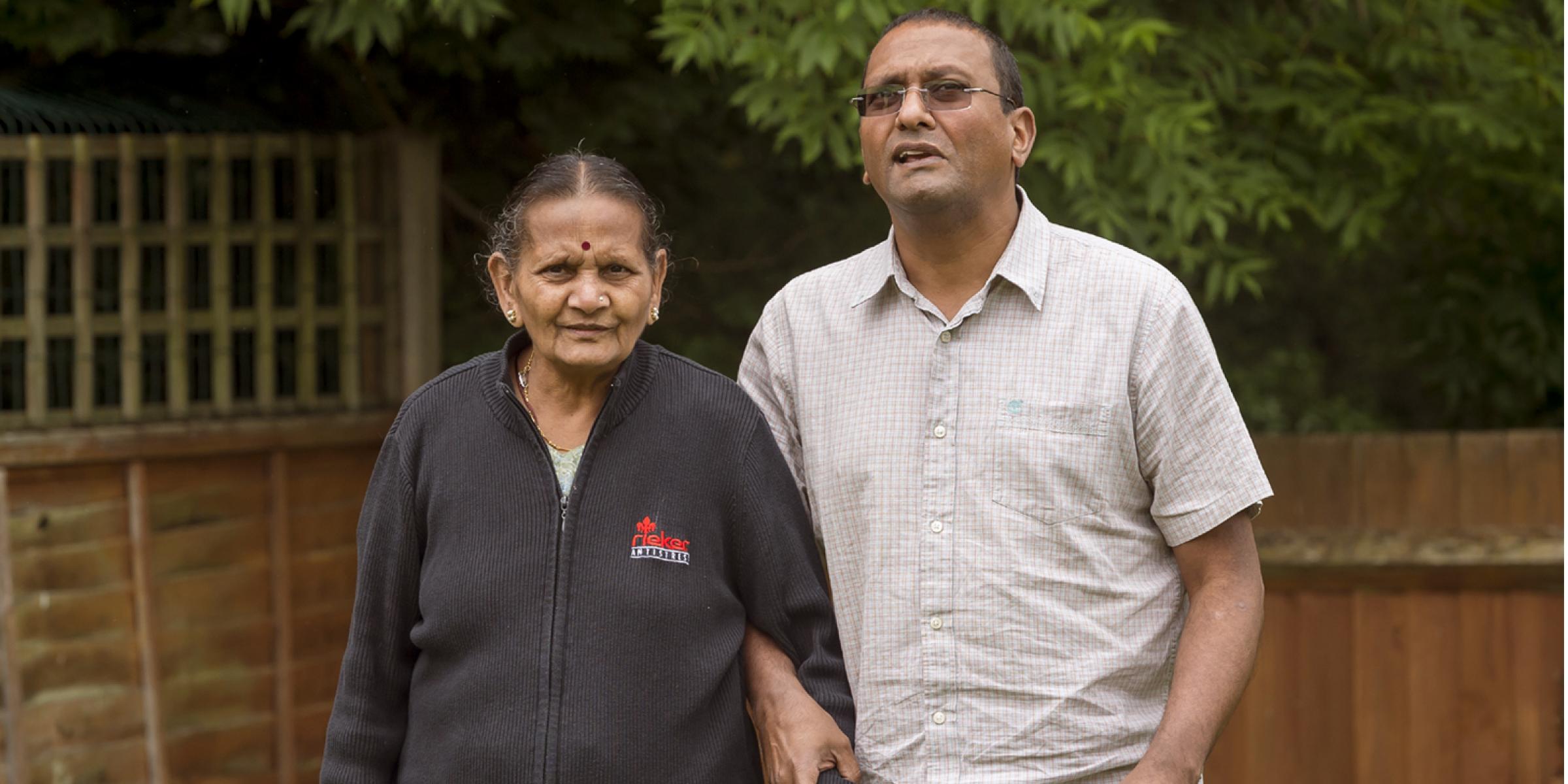 Alzheimer’s Society support has made a huge difference to Hanish Shah since his mother’s dementia diagnosis.

‘Everything changed that day,’ says Hanish Shah, recalling the stroke his father had in February last year.

Hanish’s mother, Kanta, had been diagnosed with Alzheimer’s in 2017, and it soon became clear that she wouldn’t be able to cope living alone after her husband moved into residential care.

Now Kanta’s main carer at his family home in Northampton, Hanish is calling on people in a similar position to make sure they take full advantage of whatever help is available.

‘I was between a rock and a hard place, because everything happened in one hit,’ he says. ‘But if you get the right support, it can open up new avenues and make a big difference.’

The latest version of our dementia guide is for anyone who has recently been told they have dementia. It will also be useful to the friends and family of someone with a recent diagnosis.

Kanta Shah, now 78, came to England from Kenya with her husband Jayantilal in 2001. Hanish arrived the following year.

‘Mum was always a quiet type. She wasn’t outgoing, though she did attend cultural festivals and meetings,’ says Hanish. ‘She was also a very good cook – I always remember the food she made.’

In 2017, the family noticed Kanta becoming more forgetful, though from a distance it was difficult to judge just how bad things were.

‘Because we weren’t there 24/7, we couldn’t say exactly what was happening,’ says Hanish.

‘She would mix up a lot of things and not remember tasks that had to be done,’ says Hanish. ‘You would mention something to her today, but by tomorrow she would have forgotten it.

‘Because we weren’t there 24/7, we couldn’t say exactly what was happening. We saw they needed help but could only do so much due to Dad's stubbornness. He was always there saying, “I know what I’m doing with her.”’

Later that year Kanta was diagnosed with Alzheimer’s disease, only a few months before her husband’s stroke.

Hanish used to work in customer services for the council, but left around 10 years ago after being denied flexible hours. He had been preparing to return to the workplace when his parents’ health problems forced a change of plan.

With his wife Avani working full time, Hanish stayed at home to care for Kanta, who moved into the house.

It wasn’t until Kanta came to live with them that Hanish saw the full impact of her dementia. He thinks the situation was made even more difficult because his mother had become used to ‘tagging along’ with her husband.

‘It was worse than we envisioned,’ he says. ‘When she moved in with us, we found that she was not her own self – she was waiting for direction on what to do.’

‘We had to build everything from scratch and bring in small changes.’ says Hanish.

‘It’s not easy, but now she’s bright and bubbly, whereas she wasn’t before,’ says Hanish.

‘She thought that, if she made a mistake when cooking, people would judge her, so we've tried to take that fear away. We told her she has dementia but that it's not bad to forget things. We say we’re here to help, not criticise or judge.

‘It’s not easy, but now she’s bright and bubbly, whereas she wasn’t before.’

The family try to get Kanta out of the house at least two or three times a week, including for regular yoga sessions.

Getting adult colouring books has been particularly successful, and Kanta now spends hours a day colouring pictures in while listening to music.

‘I’ve also reinforced that there are things she has to do for her health – like eating properly and good hygiene,’ says Hanish.

Hanish acknowledges that being a carer can be frustrating at times, as he and his wife strive to maintain a balance between work, caring and family life.

Local relatives have been helpful when Hanish and Avani have needed a break, while Alzheimer’s Society has been a major source of support.

‘The Society opened up a whole new world for me,’ says Hanish. ‘We started getting a lot more information about what to do and how to deal with things. They told us what benefits Mum and I would be entitled to.’

‘There are so many carers in the same situation – when you go to a group you can relate to them.’ he says.

‘I talk to them and get bits and pieces that we could use to help our situation, and Mum enjoys the activities for an hour.’

Foot in the door

Hanish is keen to raise awareness of dementia, especially among communities where greater stigma can be attached to the condition.

‘It’s not just a particular group that can get dementia, it is right across the board and could affect anybody at any time,’ he says.

‘I don’t know if it’s a taboo thing, especially as we are a minority group, but a lot of people don’t want to accept it could happen to them or their family.

‘There’s a lot of help out there, it’s just taking that first step,’ says Hanish.

‘But if people see changes in elderly relatives, follow it up with a doctor. If they do get a diagnosis, it will be better for the lifestyle of the person with dementia in the long term.’

Hanish says it’s important that carers get the advice and support they need following a diagnosis.

‘Family members might not approve of external support, they might say, “Keep it hush, let’s deal with it our way,”’ he says. ‘But there’s a lot of help out there, it’s just taking that first step, putting that foot in the door and saying, “I need help.”’

With Hanish once again seeking a return to work, the family are considering what further support Kanta might need from social services. Although she is managing at home at the moment, Hanish knows his mother might require residential care as her condition progresses.

‘With a situation like ours, we have to start planning for the future,’ says Hanish.

‘With a situation like ours, we have to start planning for the future. We couldn't just do it when it happens,’ he says. ‘We're looking into replacement care and day care, so as not to burden Mum with a last-minute rush into full-time care.’

Whatever Kanta and her family’s next steps, Hanish wants to ensure that his mother lives as well as possible, with the understanding she deserves from other people.

‘We want people to see that she is still a person and still needs to be treated with dignity and respect.’

Support, Alzheimer's disease
Back to top

Hi, I tried to download the booklet to read but I noticed it said England. Do you have an alternative booklet for Wales? - Thank you

You are facing exactly the same situation I did with my Wife Pauline. After her unexpected death in 2016 I launched a website to help people claim help from NHS , who have "Continuing Healthcare" funds, to enable people to obtain help caring for their loved ones in their own homes. This is a full time job & your own health will be an issue if you do not get Professional help daily. NHS provide a "Personal Budget" to fund the costs of buying private care & include respite care for you as well. This is not means tested.
This is a brilliant system but the difficulty is getting an Assessment to prove your family needs & Kanta's complex health needs.
My website is at https://continuinghealthcare.wordpress.com/
Initially care for a couple of hours daily to take Kanta out & keep her stimulated maybe ok. This can when necessary be doubled up to include personal care washing & dressing etc.
I suggest you research what is available before a crisis occurs, & prepare thoroughly for the Assessment.
Best wishes.
Peter Garside

Thanks for sharing this, Peter - we hope you're keeping well.

For anyone looking for more information, our page ‘Tips on preparing your case for NHS continuing healthcare’ should prove useful (https://www.alzheimers.org.uk/get-support/help-dementia-care/nhs-contin…) - we also have a free downloadable booklet with further information (https://www.alzheimers.org.uk/sites/default/files/migrate/downloads/whe…).
-
Alzheimer's Society blog team