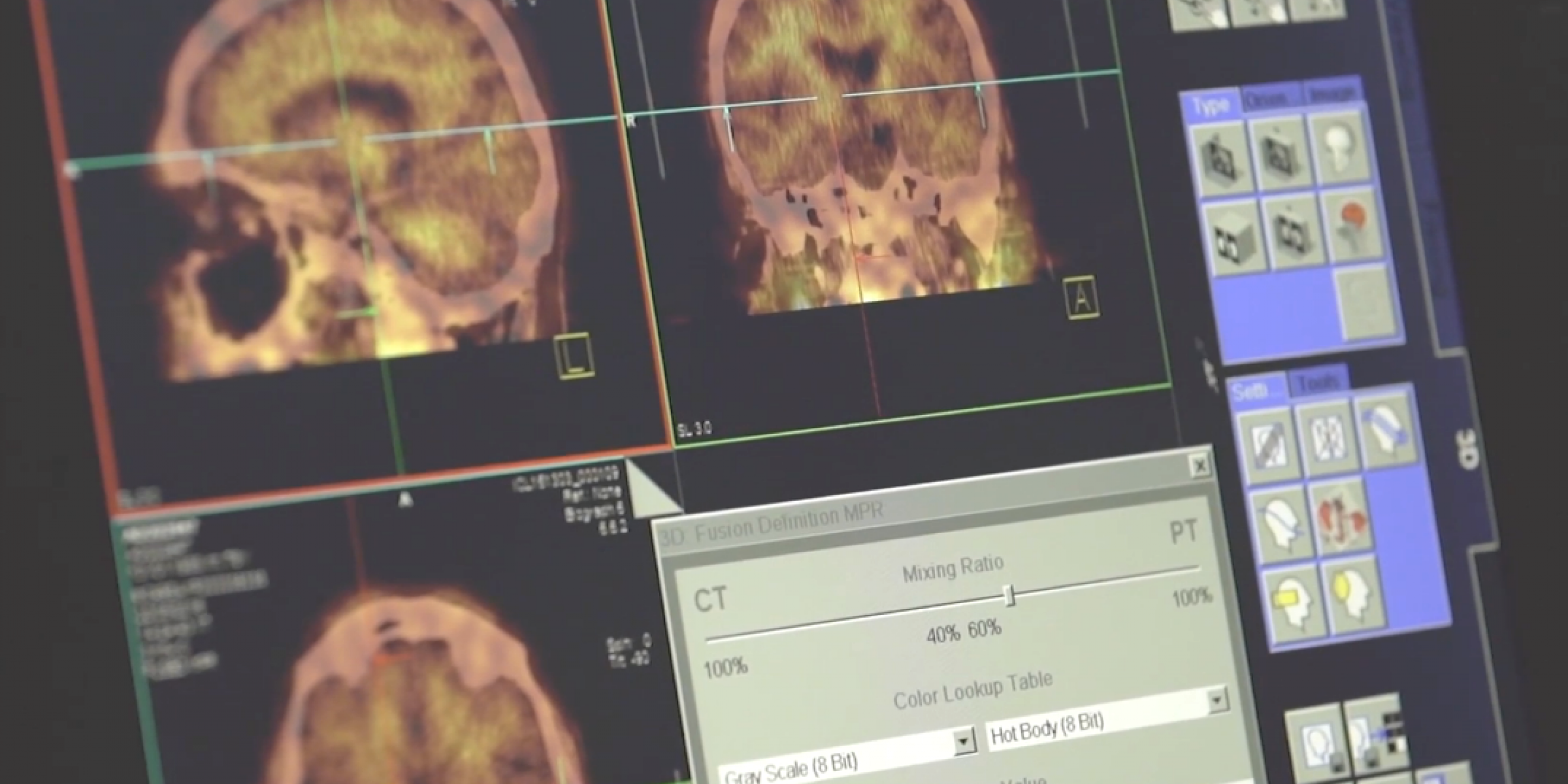 Research
What can PET scans tell us about dementia?
Blog

Advances in brain scanning tools are making it possible to identify and track the signs of Alzheimer’s disease more precisely than ever before.

Our series of research videos show what it’s like to have five different types of assessment for dementia.

This post shows how one of them – the amyloid PET scan – is becoming a vital part of research by revealing the microscopic signs of Alzheimer’s disease.

What can brain scans tell us about dementia?

The two characteristic changes in the brain of people who have Alzheimer’s disease are clumps of toxic proteins called amyloid and tau. Build-up of these proteins along with the death of brain cells defines the disease and leads to people’s symptoms.

The first account of these changes in the brain being related to the symptoms of Alzheimer’s disease is attributed to Alois Alzheimer in the early 1900s. The disease was later named after him. Seventy years later,  the first computerised tomography (CT) brain scans were developed that revealed shrinkage of the brain due to loss of brain cells in people living with Alzheimer’s.

Since then, tools for measuring the size and shape of the brain have improved dramatically. Magnetic resonance imaging (MRI) brain scans acquire beautifully detailed images of the structure of the brain, and can pinpoint more subtle areas of shrinkage as groups of brain cells die.

Until recently, spotting the toxic proteins was impossible except under the microscope, making it difficult to be certain whether the shrinkage was caused by Alzheimer’s disease, or one of the other less common causes of dementia.

Why have a PET scan?

In the early 2000s, there was an exciting development – it became possible to see amyloid in the brains of living people.

Scientists developed a special compound that could be injected into the bloodstream and attaches to clumps of amyloid protein in the brain. The compound emits a small radioactive signal that can be detected by a Positron Emission Tomography (PET) scanner.

This breakthrough made waves in the scientific community as it allowed researchers to be much more confident about the microscopic elements that were causing people’s symptoms.

‘This is vitally important because new drugs being tested are designed to target amyloid in the brain.’

Including people without amyloid pathology in previous tests of these drugs could be one reason why early trials failed.

With this new technology, researchers can be more confident that the right patients are being given the right treatments, improving the chance of finding a successful new treatment.

What happens during a PET scan?

When having a PET scan a small dose of a radioactive compound is injected, and after about an hour the scan is carried out to detect the signal that is emitted. The amount of radiation used is small but as a precaution people having a scan are advised to avoid prolonged close contact with pregnant women, babies or young children for a few hours afterwards.

The tools for detecting these microscopic signs of Alzheimer’s disease are constantly improving. Most recently, compounds have been developed that allow abnormal clumps of tau to be detected by PET scans. Precise measures of these proteins can also now be obtained using cerebrospinal fluid from a lumbar puncture.

These developments will continue to push forward our understanding of how Alzheimer’s develops and help us to test whether new drugs are successful, bringing us one step closer to a world without dementia.

Register your interest in taking part in research. Visit Join Dementia Research online, or call our support line on 0333 150 3456

Taking part in research, Assessment and Diagnosis, Alzheimer's disease
Back to top

How soon before development of dementia will it show up on pet scan?

PET scans can measure the levels of different abnormal protein build-ups in the brain which are associated with some diseases that cause dementia. It has been estimated these build-ups can be detected by PET scans years before symptoms of dementia appear in certain cases.

However, confirmation of abnormal protein build-ups via PET scan does not mean a person will definitely go on to get dementia, and other tests alongside these scans and future follow-up examinations will paint a better picture of someone’s potential condition. We are currently funding research trying to create more tests that can predict dementia before symptoms - as early diagnosis means the more quickly certain treatments, interventions and support can be given.

Thanks for the info 🙂

Hi, my father is currently under investigation for ? Dementia?
He also served in the forces, and is being treated for PTSD/ combat stress!
He is 58, has had to finish work, stop driving! Due to his memory and co ordination!
He has also developed and stutter and also has a mild tremor!
He has had 2 ct scans and is now awaiting a PET scan!

My husband had a PET Scan in 2015. He was diagnosed with LBD. he was on medication for this since then. He also has Bipolar mania disorder. He was told by his neurologist in last part of 2018 he did jot have LBD do to his testing on paper and in office was not changing.
So he was taken off all his dementia medications. I have been seeing some episodes of where he doesn't remember gaps of his life. Time frames.
What is this. ?
They keep saying he doesn't have DEMENTIA. could have fooled me.

Hello Brenda, thanks for getting in touch.
This must be frustrating and confusing for you both, first having a diagnoses of Lewy Body Dementia (LBD) and then 3 years later being told he did not have it. There are many different types of dementia and other things that can cause memory loss. If he also has Bipolar disorder perhaps that has affected his recollection of certain times. We are unable to determine what is happening but you are most welcome to give us a call on the Helpline. Perhaps having a chat about everything will be helpful and we can listen to your concerns.
We are open 7 days a week: Mon-Weds 9am-8pm, Weds-Fri 9am-5pm, Sat-Sun 10am-4pm, and you can find more information about us here: http://bit.ly/2kGVB8B. Additionally, just in case this helps also, many people use our online forum Talking Point: http://bit.ly/2tG6zMI to share experiences and get support from other people in similar situations.
Best wishes,
Helpline Adviser

Karen, where did you have your PET scan undertaken? Did you ever do analysis of the "best" units for PET scanning? Thanks for any help

I had a PET scan 2 years ago and was diagnosed with dementia at 52. Had yearly checks and memory tests. Now because I have done better. Having another Pet. Is this normal