Some research does suggest traumatic brain injuries may increase the risk of dementia. However, there is still much more research to be done to understand this complex issue, particularly in relation to contact sports like football (soccer) and rugby.

Can head injuries increase the risk of dementia?

Although there does appear to be an association between traumatic brain injuries and increased dementia risk, it’s also clear that not everyone who has experienced a head injury or repeated head injuries will go on to develop dementia.

How to reduce your risk of Alzheimer's and other dementias

Although getting older is the biggest risk factor for dementia, evidence shows there are things you can do to help reduce your own risk. These include keeping active, eating healthily and exercising your mind.

We need more research to understand how the type of injury, frequency, and the age at which head injuries happen may influence our risk of dementia.

Unfortunately, there is no accurate way to know whether someone may go on to develop dementia if they have sustained a head injury.

What is a traumatic brain injury?

Traumatic brain injury is defined by experts as an alteration in brain function, or other evidence of brain pathology, caused by an external force.

Clinically, traumatic brain injuries are categorised as either mild, moderate, or severe.

Traumatic brain injuries are common and can happen for a variety of reasons, including traffic accidents, assaults, falls, contact sports, and many others. Most are mild and don’t require hospital admission.

In the context of brain injuries in sports, the term 'concussion' is often used interchangeably with mild traumatic brain injury.

What evidence is there linking head injuries to risk of dementia?

In 2020, a group of world-leading researchers published a report listing 12 lifestyle and health conditions that are known to be associated with an increased dementia risk but could be prevented. Traumatic brain injury was included in this list of risk factors we can modify or reduce.

This team of researchers reviewed the highest quality evidence that considered a potential link between brain injury and dementia risk including several large population studies.

It’s important to remember that observational studies can identify patterns, links and trends. Although they may show an association, they cannot tell us whether head injuries were the direct cause of the increased risk of dementia. They do, however, help us to identify key questions that need further exploration.

Several studies have looked for early warning signs of dementia in the brains of people who have experienced traumatic brain injuries.

Researchers have identified the build-up of tau tangles and amyloid plaques (similar to the microscopic changes in the brain seen in Alzheimer’s disease and other types of dementia) many years after the injury in the brains of a higher proportion of people who have experienced a severe brain injury than those who had not experienced brain injury. However, we don’t know if these individuals went on to develop dementia.

Contact sports include football (soccer) and rugby, which are popular in the UK.

Physical activity and exercise have some of the strongest evidence when it comes to reducing the risk of dementia, as well as a range of other health conditions.

Although there is some evidence to suggest traumatic brain injuries (which may be sustained playing contact sports) may increase our risk of dementia, there is still limited robust research evidence relating to contact sports and again this must be considered in the bigger picture of dementia risk.

A study in 2019, led by a team at the University of Glasgow, compared the causes of death in a population of over 7,600 professional football players with those of 23,000 individuals from the general population. It showed:

This work although very important, hasn’t yet pinpointed why this is the case. Interestingly this study did show that goalkeepers were less likely to receive prescriptions for dementia drugs than outfield players.

Not every contact sports player or person who has sustained a brain injury will gone on to develop dementia or chronic traumatic encephalopathy (CTE) that has been associated with contact sports.

But it is clear that there is an urgent need to accurately gather data relating to traumatic brain injuries (from mild to severe) in sport over time.

We also need to see more research to understand any link between the number and type of injuries sustained during contact sport and developing dementia and what the underlying mechanism may be.

Currently, there are no data on dementia risk in amateur football; these studies have yet to be conducted.

However, changes in the brain associated with CTE have been reported in small studies of amateur football and rugby players with dementia when examined after death, which is why this important issue needs to be looked into.

Football and dementia risk - is there a link? 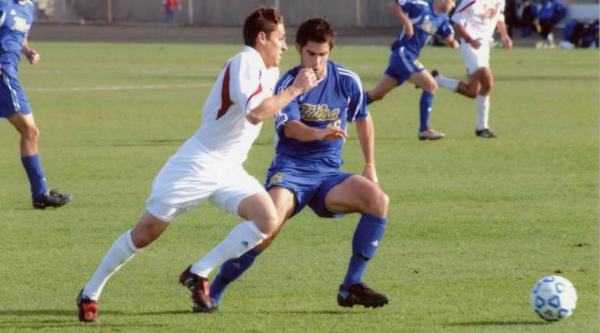 Research
News that professional footballers might be at a greater risk of dementia, and why that might be the case, has been the subject of great debate and interest. Our researchers examine the latest evidence around heading the ball and discuss what we know so far.
19

Does heading a football increase the risk of dementia?

There have been calls by many to explore the role of brain injury and head impacts as possible risk factors.

Head injuries in football are relatively rare compared to some other sports, like rugby, but head impacts are common in football through heading the ball.

While research continues to try and understand exactly the relationship between head injury and dementia in sport and what other factors might contribute to dementia risk, researchers believe that reducing head injury risk and head impact (e.g. heading in football) exposure might reduce risk. This is one reason why football associations have been reviewing heading in youth football.

As yet we don’t know whether restricting heading or introducing concussion replacements, could reduce the risk of dementia.

Whilst researchers work to understand this important issue, contact sports must be played as safely as possible.

Keeping physically active is a key way to reduce our risk of dementia. Sports like football and rugby are loved by millions across the UK and enable people to keep active. We would not discourage anyone from playing football or rugby.

We must strike a balance between ensuring people play the sports they love to keep fit and active with many health benefits and doing so in a safe way.

Sports governing bodies are encouraged to make every effort to reduce head injury risk and, where these might occur, make sure they are managed appropriately.

The general advice in concussion management across sports and activities is ‘if in doubt, sit them out'.

What is chronic traumatic encephalopathy (CTE)?

It is recognised after death by the particular way that an abnormal form of the protein called tau accumulates in the brain, alongside other brain changes. It is one form of neurodegenerative disease linked to traumatic brain injury.

CTE was first described as ‘punch drunk’ in former boxers almost a century ago and can lead to memory loss, changes in mood, confusion, disorientation, and difficulty with thinking. It is uniquely associated with history of brain injury and repetitive head impacts.

While some people who sustain repeated traumatic brain injuries will develop CTE, others will not and the reasons for this are unclear.

We need to see much more research to fully understand CTE. While the changes in the brain associated with CTE have been described, it can still only be definitively diagnosed after someone has passed away and their brain has been examined at a post-mortem examination.

Additionally, we do not know how common this disease might be among people with a history of brain injury.

What is the link between CTE and dementia?

In studies of the brains of former footballers and rugby players that developed dementia, microscopic changes in the brain associated with CTE is present in the majority.

However, there are also often other changes in the brain present alongside those associated with CTE, such as Alzheimer’s disease pathologies, and the final dementia diagnosis in these former athletes can be a range of disorders, not just CTE.

An important observation though is that CTE pathology is present in large numbers of former contact sports athletes with dementia and that this pathology is uniquely linked to brain injury and head impact exposure, suggesting these are key factors in dementia risk in these former athletes.

Acknowledgements: With particular thanks to Professor William Stewart, Consultant Neuropathologist at University of Glasgow for his support in developing this resource.

Sport United Against Dementia (SUAD) is a pioneering Alzheimer’s Society campaign, uniting the UK’s leading sports in the fight against dementia for the very first time.

Information
There are currently around 900,000 people with dementia in the UK. This number is expected to rise sharply in the coming years.
Research

Research
Annual statistics report COVID-19 as the UK’s biggest killer, moving dementia to second for the first time since 2015. But deaths from dementia remain high compared with other major diseases. We explore why.
25
Research