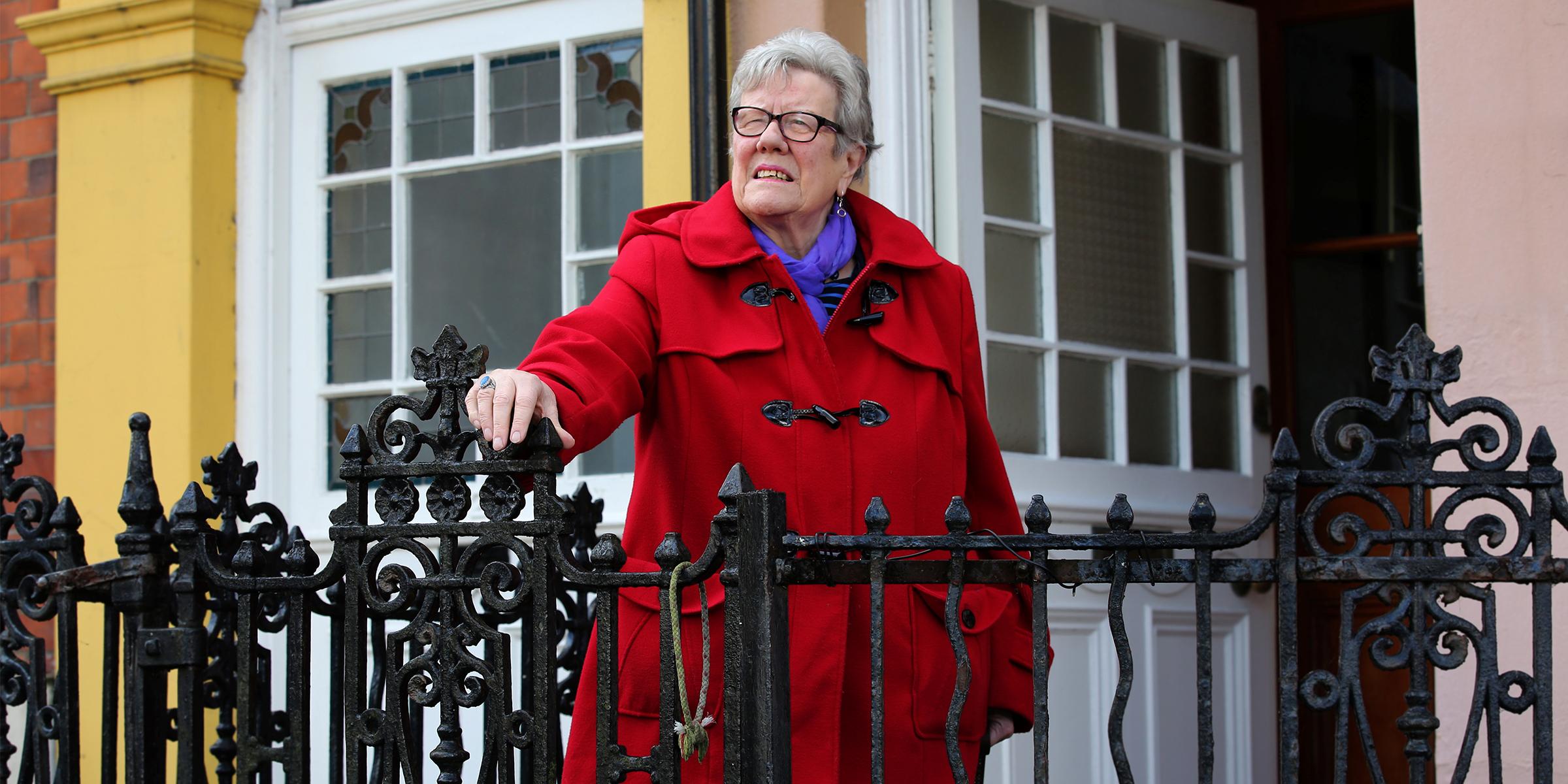 Real stories
Life as it comes: Adjusting to a dementia diagnosis
Dementia together magazine: Feb/Mar 21

Anne is grateful for the support she’s had to adapt to living with dementia.

‘I’ve had vast experience of life, moving in the fast lane,’ says Anne, a former nurse who held senior positions within hospital A&E departments for many years. ‘I was multiskilled – I had to be.’

Anne, who is 80 and lives in Aberystwyth on the west coast of Wales, was diagnosed with mixed dementia in early 2020.

‘Now I find if I try to do too much, I can’t. I can’t do the things I used to and I can’t forward plan, my brain doesn’t go there,’ she says.

Despite facing the challenges of dementia, her other health problems and the coronavirus pandemic, Anne is more than happy to share her experiences.

‘Dementia does get me down sometimes, but I’ve got nothing to hide – just like I’ve never hidden any of my other disabilities,’ she says.

Keeping it all together: Staying strong for a mum who has dementia 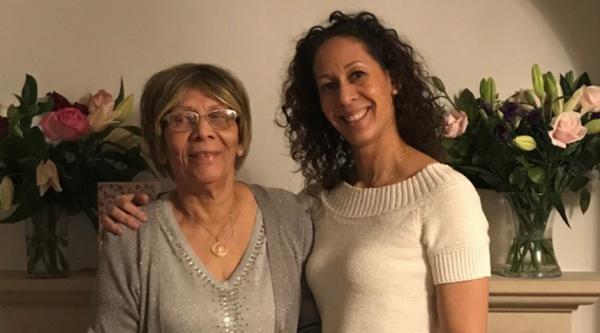 Real stories
Yvonne Ducasse is doing all she can to keep her family safe during the pandemic.
4

Anne grew up in Wolverhampton in the West Midlands as the oldest of three children. Her father died when she was nine.

‘My early upbringing wasn’t without its problems,’ she says. ‘My mother had a pretty rough time. It was a hell of a job to bring three children up.’

Anne applied for student nursing and worked in hospitals all her life before retiring in 2000. She has two sons who both live in England.

Anne enjoyed the ‘open-air life’, going on camping holidays with friends in a touring caravan.

She also travelled internationally and recalls trips to Russia and countries in Africa. She is very fond of Wales, where she eventually settled with her late husband.

‘I love Wales – the Welsh are lovely people,’ she says.

Following a car accident in 2019 in which she was hit on the head, Anne had an MRI scan. This led to a diagnosis of mixed dementia, of Alzheimer’s disease and vascular dementia, by a memory assessment service early last year.

‘I was getting depressed I suppose, because my short-term memory wasn’t so good. But not for one minute did I think I might have dementia, because I was coping with life. I thought they’d got it wrong,’ she says.

Anne was diagnosed as being in the early stages of dementia, and memory problems continue to present challenges in her daily life.

‘I’ll go upstairs for something and think, “What the hell have I come up here for?”’ she says.

‘I have to write down more than I used to. I never needed to make a shopping list, because I knew exactly what I wanted, but now I do. Dates I put down on a big calendar.

‘I also put my disabled driving permit somewhere safe and haven’t seen it since!’

Anne has diabetes, had her colon removed several years ago and uses a mobility scooter to get around. She doesn’t walk well following surgery for a torn tendon in her knee.

‘I wasn’t a well person before dementia, I’ve got several medical problems,’ she says. ‘Dementia is now affecting me physically as well as mentally.’

Staying active as a person with dementia

There are different ways a person with dementia can stay active in their community. Dementia-friendly communities can be a huge help with this.

Anne is a very independent person and was badly affected by the news that she is no longer allowed to drive.

‘That hurt me more than anything, and still does,’ she says. ‘I used to be a keen birdwatcher in the countryside and could have driven to the most beautiful woodlands, but I need a bus or train to get out of town now.

‘I still do my own shopping – I manage it in several trips on my scooter. Or my dog sits on the platform and we go to the park. So it keeps me mobile, but losing the car is the biggest drawback.’

Aside from a lodger in the top floor of her house, Anne lives alone. She had been keen to move into a flat in supported accommodation, but it turned out that the building couldn’t accommodate her mobility scooter, much to her frustration.

Anne feels that her moods have got worse as a result of dementia, while her mental wellbeing has also been affected by lockdown restrictions. She has been limiting her time spent outside and around other people, including friends and family.

‘I only go into town when I think it’s going to be quiet, and I’m very careful,’ she says.

‘I haven’t got the company I used to, and I can’t get out or function as I’d want to. The isolation frightens me more than dementia, because I know what it can do.

As of early January, Anne was still waiting for news about having the coronavirus vaccine.

‘I’m as aware as anybody about the virus, because of my nursing background,’ she says. ‘I want the vaccine and I’ve phoned my surgery, but I don’t know when it will happen.’

Living with dementia at any time brings everyday challenges for the person and those around them. Coronavirus is making daily life that bit harder. You may feel anxious, scared or lonely. But you are not alone – help is available.

Anne receives good support from friends and her sons, who have continued to be there for her since her dementia diagnosis.

She’s also grateful for Alzheimer’s Society, with regular phone calls from Dementia Support Worker Rhiannon Smith. As well as providing information and advice about dementia, Rhiannon also referred Anne to Care and Repair Cymru, who helped make her home safer. She also supported Anne in getting a lifeline alarm, which Anne used after a fall in her garden.

‘Rhiannon has helped me with my physical and mental condition, she’s been very good,’ says Anne. ‘She always knows the answers and the right thing to say. She shows empathy and always reacts if I need anything.

‘I know she is always there if I want her. My son has rung her too, when he’s been concerned.’

Anne has also benefited from regular phone contact from our volunteers, including Companion Calls, which have been supporting people during the pandemic.

‘The calls have been excellent, they really have, particularly with what’s going on at the moment,’ says Anne. ‘They listen to me and always seem to know the right thing to say. They’re good at conversation and understand where I’m coming from.

‘We talk about all sorts of things – the volunteers are very worldly and you can hold a discussion with them. They’re very interesting to talk to and I haven’t been bored with their company at all! They’re a big help.’

Anne feels that there is unfair and unnecessary stigma around conditions like dementia.

‘Dementia is an illness. I think people try to hide it, but it’s nothing to be ashamed of,’ she says. ‘It should be accepted the same way as cancer or diabetes or heart failure. What’s the difference?’

And although things aren’t easy right now, Anne continues to maintain her independence with the support of those around her.

‘I’m getting forgetful but I’m still functioning, I can cope,’ she says. ‘I just live life as it comes.’

You can help ensure that all people with dementia receive the same support from Alzheimer’s Society that Anne’s had – please give what you can.

Dementia together magazine is for all Alzheimer's Society supporters and anyone affected by the condition.

Dementia together magazine is for all Alzheimer's Society supporters and anyone affected by the condition.