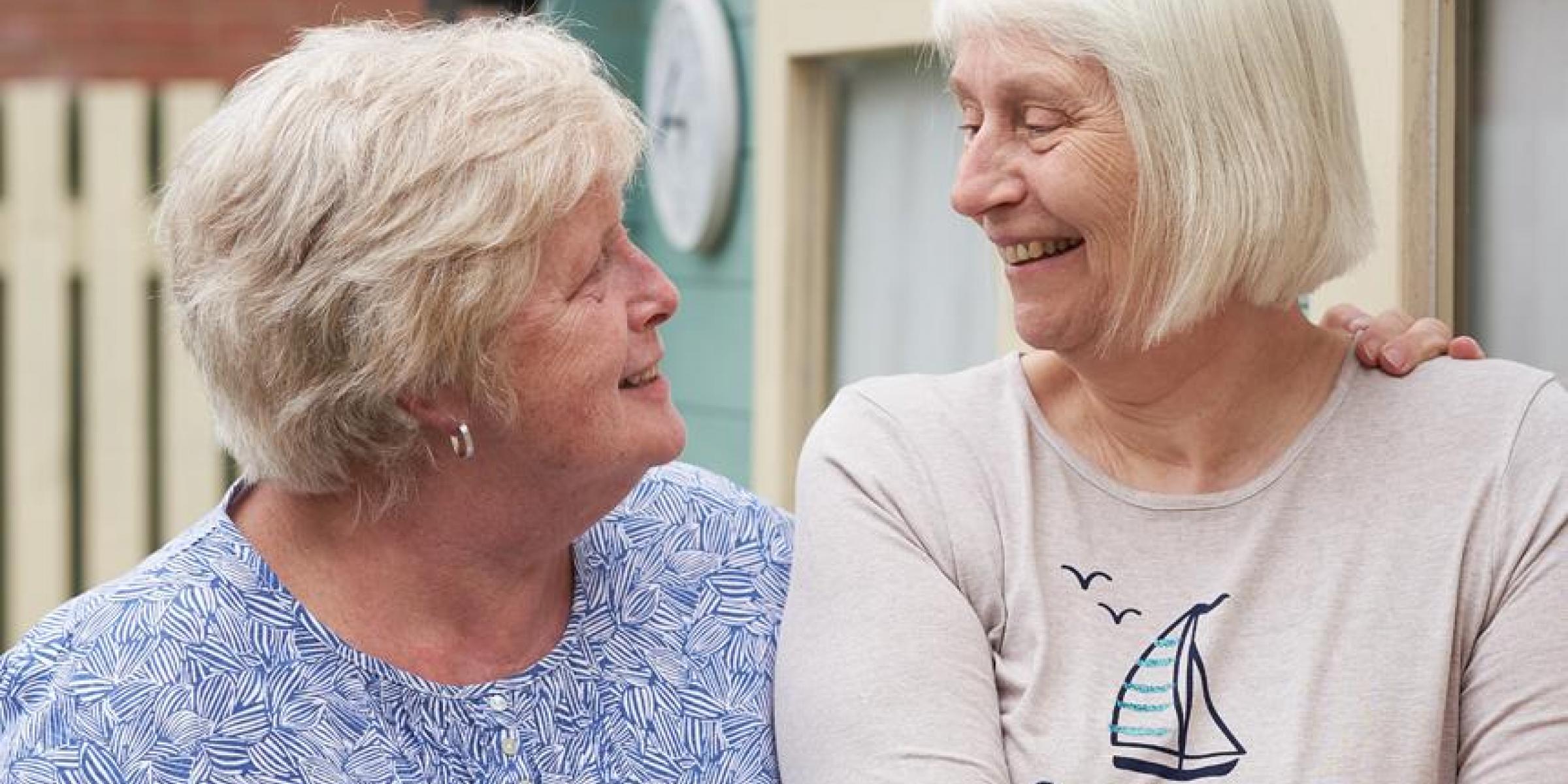 Real stories
Source of strength: A woman with dementia who is fighting back
Dementia together magazine: June/July 18

We meet Chris Maddocks, who has vowed to do what she can while she can to support the cause.

What is vascular dementia?

Vascular dementia is the second most common type of dementia (after Alzheimer's disease). Everyone experiences it differently. Symptoms vary depending on the person, the cause and the areas of the brain that are affected.
Read more

When she was diagnosed with young-onset vascular dementia aged just 60, Chris Maddocks initially thought her life was over. But with the support of her partner, Heather, she has rebuilt her self-esteem by immersing herself in the dementia movement and doing all she can for the cause.

An avid player of squash, badminton and tennis in her youth, representing South Wales schools in the javelin, Chris originally thought she would become a PE teacher.

Instead, she joined South Wales Police and spent 30 years in the job, mostly in CID. She also had a five-year secondment to Interpol in London during the 1990s. Chris, 62, latterly worked in law enforcement for the Environment Agency before retiring because of ill health in October 2016.

She met Heather, now 59, around 12 years ago at a police rehabilitation unit.

‘We happened to both be having physiotherapy on injuries,’ recalls Chris. ‘We kept in touch, remained friends and then started holidaying together.’

Chris, who now lives with Heather in Eastbourne, East Sussex, had three strokes in her 50s, which led to extreme fatigue and memory problems.

After a spell off work, she returned part-time but was struggling to cope.

‘I couldn't remember how to get onto my email account,’ she says. ‘Then I was reading our new policies and procedures and nothing was going in.’

Chris retired from work but daily life was still proving a struggle.

‘One day I went to get dressed but couldn't remember how,’ she says. ‘I sat on the bed for 10 to15 minutes before it came back to me.’

In the aftermath of her third stroke, Chris also experienced depression and anxiety.

‘I was in the local supermarket and felt as though everybody was looking at me – I just had to leave the shop,’ she says.

‘I don't know why it happens, but you just feel as though you're not coping. I did a very responsible job for 30 years, so it’s such an alien feeling for me.’

Feelings after a diagnosis and as dementia progresses

After someone is diagnosed with dementia and as it progresses, they and the people close to them may have many different feelings, such as guilt, loss and grief.

Chris received valuable support from the Stroke Association but felt there was more to her situation, so returned to her GP.

‘To my horror, she told me that she was there for my physical health not my mental health, and that in her opinion I didn't have a problem,’ says Chris.

‘I left the surgery in tears because I thought, if I can't get help here, then where do I go?’

As she was leaving, Chris saw a stand being set up by Alzheimer’s Society, so spoke to a staff member.

‘I was sent a leaflet about vascular dementia,’ she says, ‘and as I read it I kept thinking, “That's me.”’

‘I went home and cried for three months, because I thought I'd been given a death sentence,’ says Chris.

In late 2016, Chris was diagnosed with young-onset vascular dementia at an elderly care assessment unit, having not long turned 60.

‘That devastated me,’ she says. ‘I went home and cried for three months, because I thought I'd been given a death sentence.’

Chris later decided to contact Alzheimer’s Society, where her call was answered by the same staff member she’d met at the GP surgery, who arranged to visit with a colleague.

‘I had so many questions, but they were fantastic,’ says Chris. ‘It was a horrible diagnosis to receive but at least I now knew what I was dealing with.’

Chris attended the Society’s Live Well with dementia programme, which she describes as a ‘real lifesaver’.

However, she was  beginning to struggle with living on her own, sometimes forgetting to eat proper meals. Heather suggested that Chris move from Cardiff to Eastbourne to live with her.

‘I was absolutely gobsmacked, because I didn't know if Heather realised what she was taking on or how I might become,’ says Chris.

‘I couldn't believe that somebody loved me and cared for me enough that they would be prepared to look after me. I think it's a huge sacrifice.’

How do I make a Lasting power of attorney?

To make a Lasting power of attorney (LPA), you need to fill out a form and register your LPA with the Office of Public Guardian (OPG). The OPG can also help with any questions or complaints about your LPA.
Read more

Although living with Heather has been positive, Chris continues to experience fatigue, difficulties in finding words, memory problems and anxiety.

‘But Heather gets it – she understands my dementia far better than anybody else.’

For this reason, Chris has set up two lasting power of attorneys, one for property and financial affairs, the other for health and welfare issues – to give Heather the legal authority to make decisions on her behalf if she needs her to.

‘It’s difficult for my family, being so far away, to know my needs, whereas Heather does know,’ she says.

Chris has experienced difficulties getting the right support from the benefits system.

Having retired due to ill health, her application for Employment and support allowance was refused. Although she lost an initial appeal, this was later overturned at a tribunal.

‘I wanted to challenge it because there are lots of people with dementia who wouldn't be able to go through that process,’ she says.

‘It’s the same with the Personal independence payment. Why can't the government say this person with dementia doesn’t need to be sent these complex forms every two or three years and go through the whole process all over again?’

After deciding to get more involved in Alzheimer’s Society’s work, Chris joined a panel – now part of the Focus on Dementia Network – to have her say on local and national issues affecting people with dementia.

She has also given talks about her experiences, including one to members of the local Chinese community, and has sat on Society job interview panels.

‘By not working and not being able to do a lot of things I started to feel useless, but now I feel useful and better about myself,’ she says.

Chris is also contributing to an Alzheimer’s Society project to identify and address the specific needs of LGBT+ (lesbian, gay, bisexual and trans) people who are affected by dementia.

‘There is still quite a lot of prejudice out there, but I think that if Alzheimer’s Society gets it right that will help everyone have a better understanding,’ says Chris.

‘A lot of people maybe wouldn’t feel free to tell people that they are LGBT+ or feel comfortable among those who they do tell,’ she says. ‘And they tend to not go to groups.

‘I think it’s even more difficult for trans people to feel accepted as who they are. If they can know that Alzheimer’s Society is open and treats people fairly, then it may not be such an issue for them to approach the Society if they've got a diagnosis of dementia.

‘There is still quite a lot of prejudice out there, but I think that if Alzheimer’s Society gets it right that will help everyone have a better understanding.’

Chris has certainly encountered situations that could have been better handled by the professionals involved.

‘If I go to a medical appointment and Heather's with me, people should perhaps just ask who she is, rather than me having to explain that it’s my partner,’ she says.

‘Even then, sometimes you're fronted with a stone-cold response and awkwardness.’

As well as dementia, Chris has been diagnosed with vascular Parkinsonism, where Parkinson’s-like symptoms are caused by restricted blood supply to the brain. She was also recently told that she might have Parkinson’s disease.

Despite all this, she remains determined to make a difference.

‘I’m well aware that my lifespan probably won't be as long as it would be if I didn't have these conditions,’ she says.

‘That’s why it's important to do what I can while I still can.’