Real stories
A full life: Friendship and meaning through Side by Side
Dementia together magazine: Dec 18/Jan 19

Paul Eatwell hasn’t looked back since he became East Lancashire's first Side by Side volunteer.

In many ways, Paul Eatwell’s approach to life embodies the spirit of our Side by Side service.

‘I have always tried to stay positive and to look at life in terms of what I can do rather than what I can’t,’ he says. ‘It seems to me that Side by Side is an opportunity to put that into practice.

‘I wanted to do something positive,’ says Paul.

‘I wanted to do something positive and, even if only in a very small way, to help someone with dementia to stay positive and continue to do the things that they have always enjoyed – to live as full a life as possible.’

Keeping connected: The right support at the right time 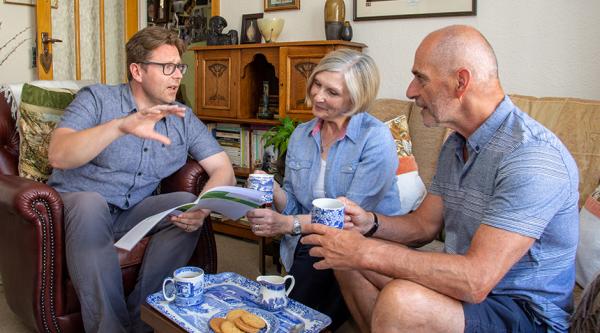 Real stories
We report on Dementia Connect, a new service being developed to keep in touch with and support people affected by dementia.
3

In the spring of 2017, East Lancashire became the first area for us to introduce our new service, Dementia Connect. As part of this, Side by Side connects volunteers with people who have dementia, so they can support them to keep doing the things they enjoy.

‘I think we were both a bit nervous when he originally agreed to trial the service, but we have developed a firm friendship,’ says Paul.

Paul, a Dementia Friend in Blackburn with Darwen, was put in touch with Wayne Smith after becoming the area’s first Side by Side volunteer. Now aged 63, Wayne was diagnosed with Alzheimer’s six years ago.

Paul says, ‘I think we were both a bit nervous when he originally agreed to trial the service, but we have developed a firm friendship.

‘Wayne has always enjoyed walking and drinking coffee. We generally head out to a nearby coffee shop, chatting about life, the universe and everything, and enjoying the countryside and the changing seasons.

‘Wayne and his wife have placed an enormous amount of trust in me by allowing me into their lives, but what began as an assignment has become a real friendship.’

Our Side by Side service links people living with dementia to volunteers, so they can keep doing the things they love.

Rebecca, Wayne’s wife, has no doubt about the positive impact of Paul’s visits on her husband.

‘It gives him company,’ she says. ‘It also gives him someone to chew the fat with.’

She’s also conscious of Wayne’s need to talk about his dementia to someone other than her.

‘It benefits Wayne to speak to someone about it. I know he feels sad for me sometimes and I think that stops him talking to me about it. It’s not the easiest thing to talk about.’

‘Dementia doesn’t automatically mean the end of independence and enjoyment – it’s a diagnosis, not a sentence,’ says Paul.

Paul says, ‘Being a Side by Side volunteer has improved my listening skills and made me think more broadly about how I relate to people in everyday life. It also gives me a buzz to feel that I’m doing something positive for a friend.

‘Dementia doesn’t automatically mean the end of independence and enjoyment – it’s a diagnosis, not a sentence.’

Dementia together magazine
Back to top

I have been told that at my age (84) I have a form of dementia . Perhaps I have but I am continuing to play golf with my friends and in fact my form has been improving. I have been required to have a driving test for which my doctor has passed my ability to continue driving. I felt that I came close to passing there being some tricky parts in unknown territory in a manual car. People in our retirement Village say that it is difficult to pass as they want tp reduce the number of older people driving cars. Pretty rough on us oldies!