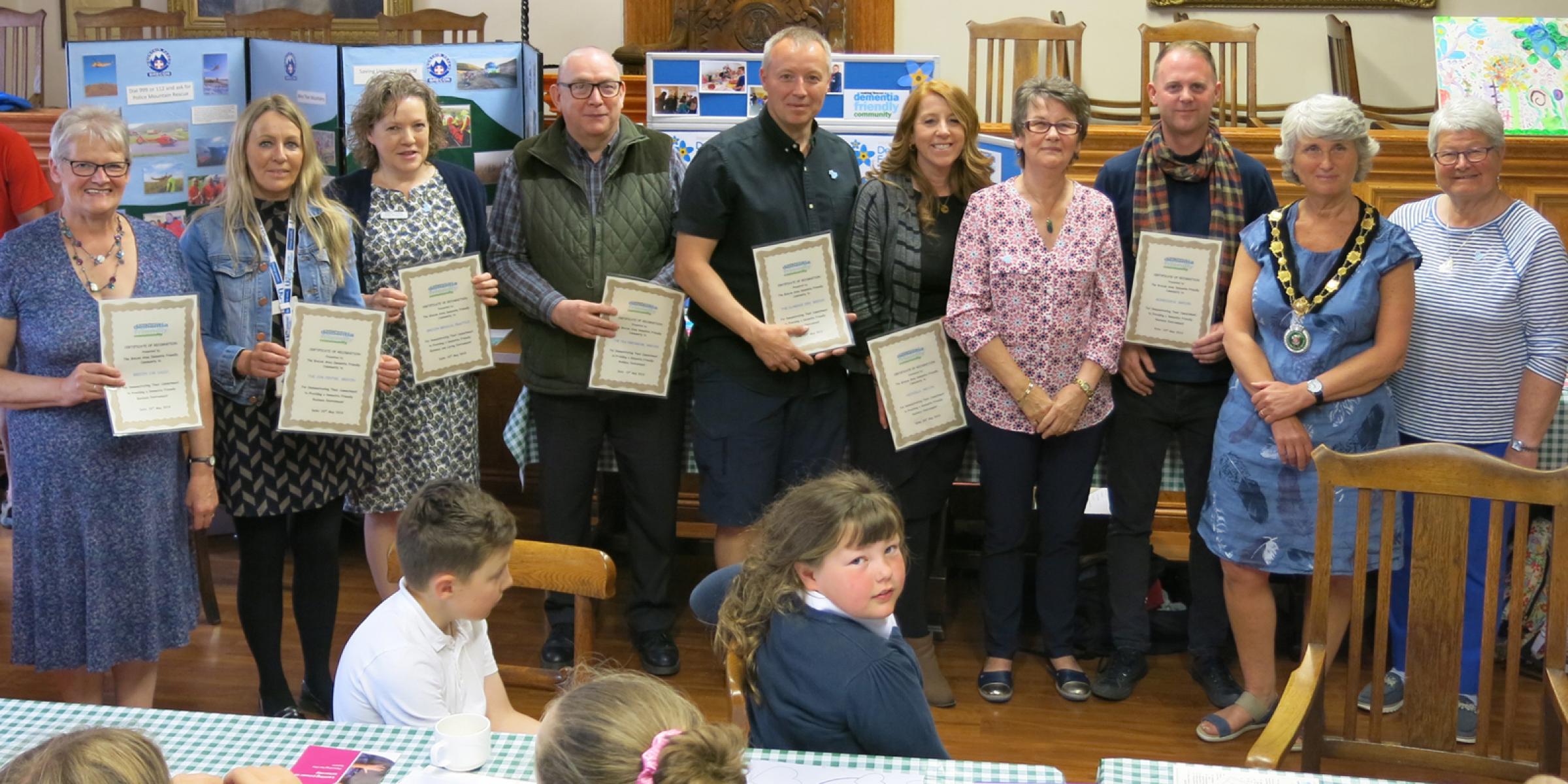 In our 40th year, we celebrate the people who are making a real difference for people affected by dementia in their communities.

From a condition never discussed and little understood 40 years ago, Alzheimer’s Society has brought dementia out of the shadows. Our founders were determined to transform the landscape of dementia forever, and more people than ever are turning this vision into reality.

Nearly 3 million Dementia Friends and over 400 recognised dementia-friendly communities are making changes – big and small – so that more people with dementia can feel included and involved.

Real stories
In our 40th year, we look at how people affected by dementia are influencing how we develop Dementia Connect, our new service.
0

In August 2014, Brecon received official ‘Working to become dementia friendly’ recognition from Alzheimer’s Society – the first community in Wales to achieve this.

‘We’re helping people to keep on being part of the community by making places welcoming and accessible,’ says Joan.

Dementia-friendly Brecon, known as Brecon Area DFC, is mobilising all sections of the community to challenge stigma, increase awareness and make sure that the voices of people affected by the condition are heard.

‘We’re helping people to keep on being part of the community by making places welcoming and accessible,’ says Joan Brown, a Dementia Friends Champion who is chair of Brecon Area DFC.

This has included auditing how local businesses operate and advising them on how to make their environments more dementia friendly.

How can you help people with dementia to feel understood, valued and able to contribute to their community?

Joan also set up four intergenerational projects with weekly visits for schoolchildren to care homes and a community day centre.

‘Raising a dementia-friendly generation is hugely important, because there are kids growing up without the fear and stigma,’ she says.

Dave Coombs, a volunteer for Brecon Mountain Rescue Team, became a Dementia Friends Champion after colleagues found they were searching for more missing people with dementia.

The rescue team is about 50-strong, but Dave hopes the message spreads into the wider community too.

‘I’ve seen the difference a bit of awareness can make in interactions with people,’ says Dave.

‘I believe in a lot of people doing a little to make a difference,’ he says.

Dave also works for the Welsh Ambulance Service, where he is helping to support emergency services across Wales to better serve people affected by dementia.

‘I’ve seen the difference a bit of awareness can make in interactions with people. Small things are noticed when I go into someone’s home,’ he says.

Dave is on the Brecon Area DFC steering group and recently helped organise a local event during Dementia Action Week.

‘Brecon being a rural community adds an extra dimension,’ he says. ‘We’re looking at being creative to get people to events or groups.’

Real stories
As we mark 40 years of the Society, we speak to the campaigners working to end injustice for everyone affected by dementia.
0

Sue Barker is a mental health nurse and lecturer who sits on a Champions Forum – a group of local Dementia Friends Champions who meet to support each other and share ideas with Alzheimer’s Society.

She holds Dementia Friends sessions at Cardiff University, where she works, and more locally in Brecon.

‘Behaviour breeds behaviour, and if one person starts to behave differently others tend to follow,’ says Sue.

‘The drop in the ocean of Brecon does not need to be as big as the drop at the university to make a change,’ she says. ‘Behaviour breeds behaviour, and if one person starts to behave differently others tend to follow.’

‘I hope they take a few seconds to think why someone might be doing that, rather than automatically responding as if everything is about and because of them,’ she says.

‘Dementia Friends is a brilliant vehicle to share a message of kindness, consideration and the recognition that small changes can make a huge impact.’

Learn more about what it’s like to live with dementia and turn that understanding into action – it’s really easy to do.