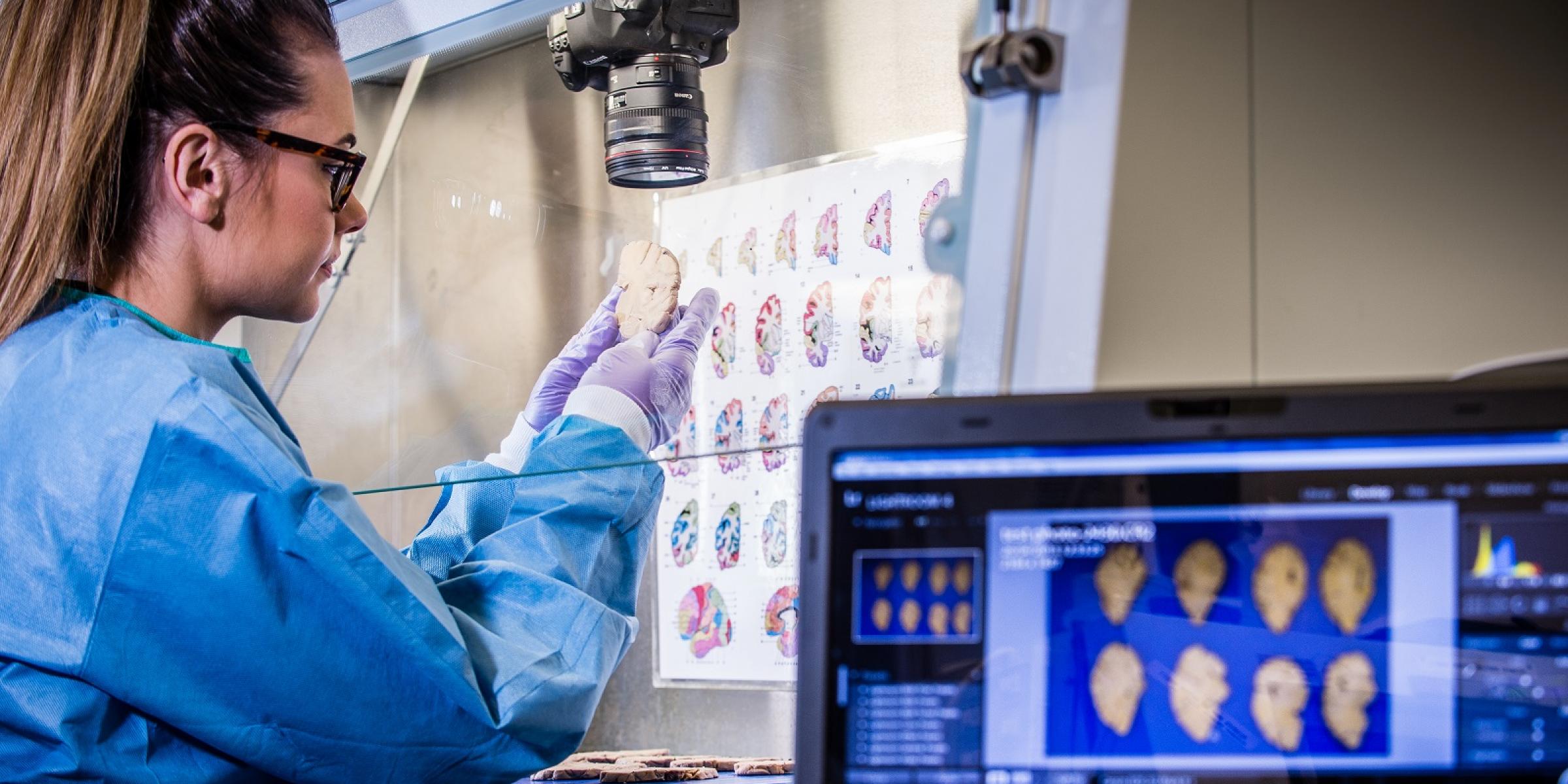 An international team of researchers has identified a brain disorder, known as LATE, that mimics the symptoms of Alzheimer’s disease. Alzheimer’s Society researcher, Dr Kirsty McAleese shares what this means for dementia research.

Earlier this month the media was buzzing with excitement about a recent report identifying a ‘new type’ of dementia. The brain disorder is known as LATE (or to use its scientific name, Limbic-predominant age-associated TDP-43 encephalopathy.)

The symptoms of Alzheimer’s disease are generally mild to start with, but they get worse over time and start to interfere with daily life. Read how the symptoms can progress.

LATE is described as a separate disease that can mimic the symptoms of Alzheimer’s disease such as memory problems. It is important to understand that symptoms of dementia occur due to damage to cells in part of the brain known as the hippocampus.

This damage can be caused by different things; most commonly the build-up of toxic sticky proteins, tau and amyloid that is seen in Alzheimer’s disease. In LATE there is a build-up of another toxic protein, called TDP-43. It too can damage the brain cells in the hippocampus which explains why the clinical symptoms of LATE are very similar to those of Alzheimer’s disease.

Think about it in terms of the common cold, over 200 different viruses can cause cold symptoms - there can also be several different causes of dementia symptoms. Although currently it is almost impossible for clinicians to distinguish between LATE and Alzheimer’s disease, there are some key differences.

LATE seems to affect individuals over the age of 80 years, progresses slower than Alzheimer’s disease and tends to only affect memory.

Our research on LATE

So, for all of this time, the build-up of the protein TDP-43 was hiding amongst us and we never knew about it?

Well, in fact researchers such as myself and my colleagues from Newcastle University, have been researching TDP-43 and its role in dementia for a number of years now.

In 2016, when I was an Alzheimer’s Society-funded research associate, we published research about the prevalence and importance of identifying the build-up of TDP-43 in donated human brain tissue.

The recent report showed that people with Alzheimer’s disease often have LATE as well.  We have shown through our research that LATE can also be present in people with a diagnosis of dementia with Lewy bodies.

We need thousands of people with and without dementia to take part in research. This could be taking part in a drug trial or simply giving a blood sample, completing a questionnaire or having a brain scan.

The proteins amyloid and tau have been associated with dementia for decades, but we know much less about TDP-43. After 10 years of collecting information from around the world, we are only now, starting to understand its role in dementia.

This breakthrough was only made possible by the donation of human brain tissue. Without these truly heroic and kind-hearted donations through Brains for Dementia Research and to various brain banks throughout the UK (and the world) it would not be possible for us scientists to make these essential discoveries.

'This type of research is the first step towards more precise diagnosis and personalised treatment for dementia, much as we’ve started to see in other serious diseases such as breast cancer.

'This evidence may also go some way to help us understand why some recent clinical trials testing treatment for Alzheimer’s disease have failed – participants may have had slightly different brain diseases.

The key goal of the LATE report was to raise awareness of LATE and encourage more research to understand the underlying causes and its impact on public health. This will be vital to bring us a step closer to our ultimate goal of preventative, precise and personalised treatments.

Sign up to our monthly email update to hear all the latest news and developments in dementia research.

Assessment and Diagnosis, Types
Back to top

I am my wife's caregiver. She was first diagnosed with Alzheimer's About 2017 at the age of 87 years. She was reconfirmed by Monica K Crane (Knoxville) in 2017.She is now 92. I believe she has Late Alzheimer's TDR_ 43. If so should she be taking different meds. than Aricept &Namenda? Bill Rogerson

Fascinating! My husband (well known to you) is nearly 90. He has 'defied' a diagnosis of Alzheimers since 2006 but changed radically at about 85. Recently a tentative but compelling diagnosis of 'with Lewy Body Dementia' has been added. P. has always been atypical - even now with the Lewy Body addition. Could it have been LATE? He is a signed up future Brain Bank donor. I hope 'his' researchers will be looking out for LATE markers in his brain. Then the many questions his diagnosis has raised might be answered and some of our pain might have been worthwhile.

Having h d a brain scan on my wife's head in discussions with a neurologist he pointed out that whilst she had no evidence of Amyeloid plaque build-up or tau tangles her brain shape was in all other respects similar to that of a person with Alzheimer's disease .

I then found out about Research at the University of Kentucky in the USA which was published in the journal Brian in April of last year. The author of the paper Dr Peter Nelson stated recently "This is a massively underappreciated and understudied disease(s)— TDP-43 proteinopathy (with or without comorbid AD pathology) is strongly associated with cognitive impairment, although, for a gradually progressive disease that affects >85-year-olds preferentially, a lot of persons die in a presumed preclinical state".

There seems to be a lot of research going on inot this condition although NHS Psychiatrists seem blissfully unaware ofits existence as a separate condition form AD.

My soon to be 85 year old mother seems to be suffering with dementia or something that mimics similar symptoms -- perhaps like late-onset bi polar disorder? She refuses to be evaluated by a physician. All her life she has had solid memory recall and social interaction. Now, she exists in a partial dreamworld; resistant to every day reality. I've wondered whether this could be some severe type of depression, as she certainly appears to be in some depressed state which has suddenly tied her to a past of her own making. Our family is trying to cope but without her own recognition of the problem and her persistent personal isolation, we are struggling every day.

I have learned more about dementia and am now more aware of how it can have an impact on someone's life.

Thank you. I so admire the intelligence and dedication of doctors and scientists who are struggling to find a cure for Alzheimer's. Humanity suffers. It was ever thus. Let us all hope that mankind will eventually understand its position and nurture the goodness in the human heart.