Understanding the prevalence of LATE, a new form of dementia

'A research topic which could change the way a group of people with dementia could have their treatment and care options very much improved with a more specific diagnosis.'

Professor Brayne and her team aim to understand how common a new type of dementia, LATE, is in older people and the role of the TDP-43 protein in dementia.

By studying donated human brains, the researchers will look at how common and how severe TDP-43 abnormalities are in older people.

This study aims to lead to the development of tests to measure how changes in TDP-43 relates to dementia in older people and to use this understanding to search for treatments to help those with dementia.

There are several different types of dementia, each with distinct features and characteristics. Researchers recently identified a new type of dementia called ‘Limbic-predominant, Age-related TDP-43 Encephalopathy’, or LATE. This type of dementia is thought to involve changes in one specific protein, known as TDP-43.

However, we don’t only see TDP-43 abnormalities in dementia. They can occur in the brains of people with other diseases. With a limited understanding the role of TDP-43 in the human brain and in dementia, LATE is often misdiagnosed as other types of dementia, such as Alzheimer’s disease.

Understanding the relationships between TDP-43 abnormalities and dementia is essential if we are to fully understand how TDP-43 affects brain ageing in the population and how it contributes to LATE.

The project will look at the relationships between dementia and TDP-43 in many areas in brains donated by participants in the Cambridge City over 75s Cohort and the Cognitive Function and Ageing Study I. These large studies of brain ageing in older people contain over 800 brain donations combined.

This work will build on our knowledge of TDP-43 and its role in LATE. It could help us understand whether there are features of the disease that help us to distinguish it from other forms of dementia, like Alzheimer’s disease. It may also enable researchers to develop experimental laboratory systems that better represent the disease, which could ultimately lead to the development of disease-modifying treatments.

Echoing the comment from the Research Network volunteer, this study has the potential to improve many people’s lives, by helping people who are often misdiagnosed receive improved treatment and care due to a more accurate diagnosis.

A new type of dementia: It’s never too LATE 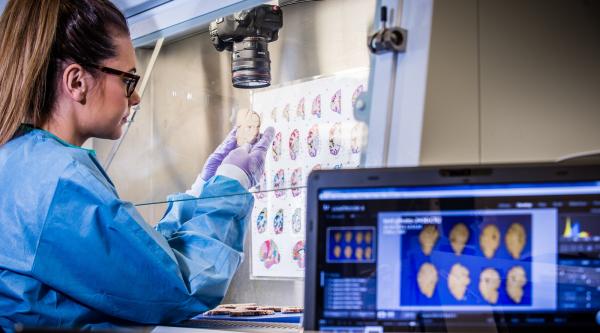 Research
An international team of researchers has identified a brain disorder, known as LATE, that mimics the symptoms of Alzheimer’s disease. Alzheimer’s Society researcher, Dr Kirsty McAleese shares what this means for dementia research.
16
News

A recently recognized brain disorder that mimics clinical features of Alzheimer's disease has for the first time been defined with recommended diagnostic criteria and other guidelines.
Read more
Advice

Read our introduction to dementia in people with learning disabilities. This section includes details of why someone with a learning disability is more likely to develop dementia, and suggestions how they can live well with the condition.

Dementia is progressive. This means symptoms may be relatively mild at first but they get worse with time. Dementia affects everyone differently, however it can be helpful to think of dementia progressing in 'three stages'.
Read more
Advice

What is different about dementia in someone with a learning disability?

Find out why dementia is different for someone with a learning disability.

This pages looks at why people living with a learning disability are at increased risk of developing dementia.

Symptoms of dementia in people with a learning disability

Find out the common symptoms of dementia for someone who has a learning disability, as well as the best way to carry out an assessment.