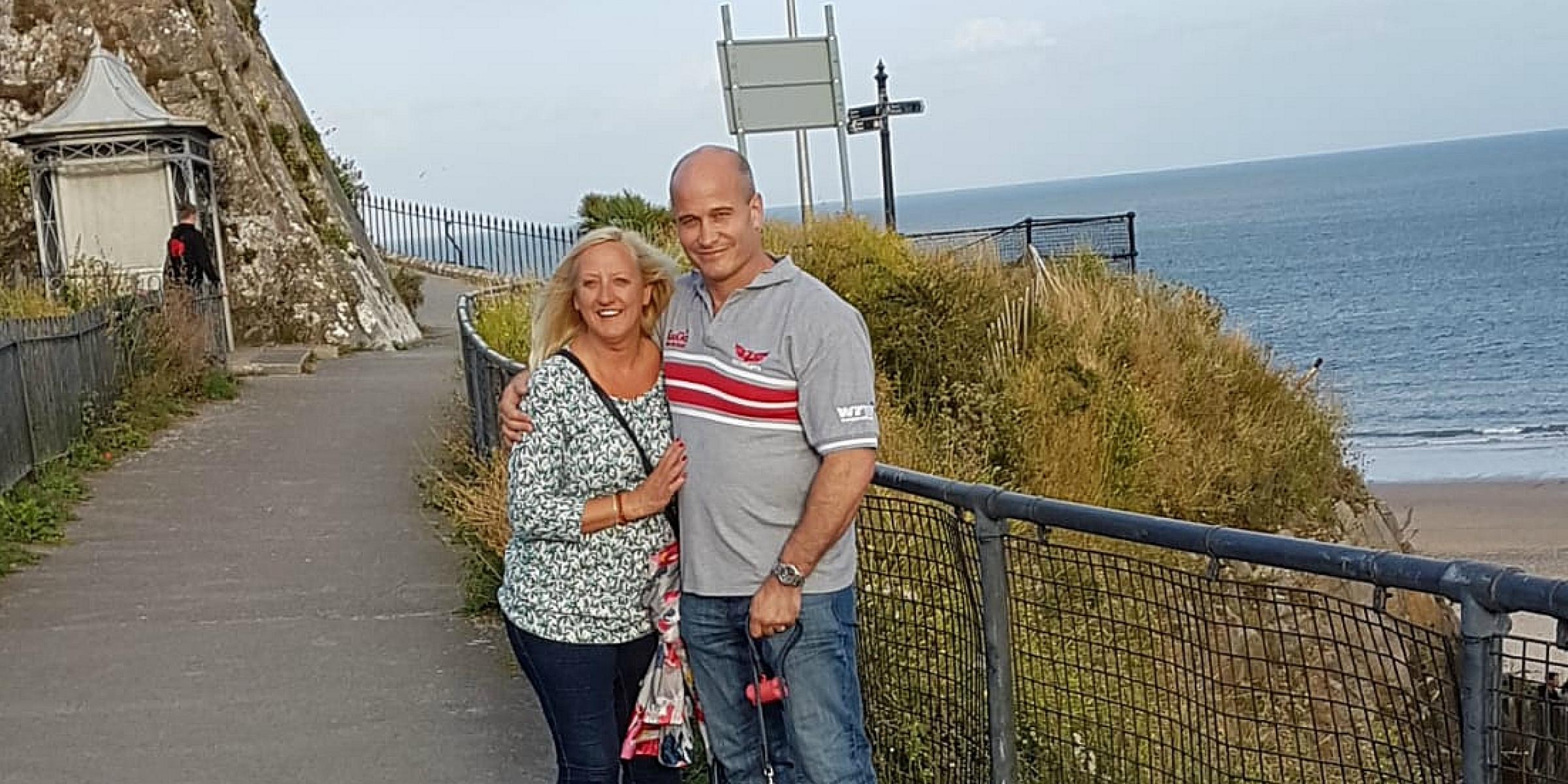 At 50 years old, Debbie was told that she had mixed dementia. Following her diagnosis, the stigma surrounding dementia has had a significant impact on her life. But Debbie believes people’s attitudes towards people affected by dementia can be changed.

I’m Debbie, I’m 51 years old, and I live in Caerphilly in Wales. Married to Steve, we have three children and enjoy going on family holidays. We like entertaining friends, going to shows and having fun!

Leading up to my 40th birthday, I found myself becoming increasingly stressed and tired.  I was working full-time in a secondary school and trying to look after my family. Steve was working long shifts as a police officer.

I believe the stress and tiredness were partly why I had a series of TIAs (transient ischemic attacks, or ‘mini strokes’). It was around that time that I spent three weeks in hospital where I was prescribed statins and aspirin. ​

The first signs of dementia

In more recent years, I started to become increasingly tired and unable to think and process as I once had. People started to notice that I wasn't as organised and couldn't remember things that had once come so easily to me.

Many people said that I had lost my spark!

Life outside work also became a challenge. I would get lost driving or walking to the local shop and I would get confused cooking basic meals.

On one occasion, whilst shopping with my sister, I went into the changing room to try some clothes on. When I had finished, I left with only my top on and handbag on my shoulder - I had forgotten to put my trousers on! My family were becoming increasingly concerned.

One morning, I was in work and a colleague asked me a simple question. I became confused in the classroom and left. I was found by another colleague, walking about in the corridor, not knowing where I was or recognising who my colleague was.

Steve was called, who immediately took me to the GP. I was referred as an urgent case to the memory clinic. I received a series of memory tests and scans within a matter of weeks.

Talking to your GP

If you (or someone close to you) are worried that your symptoms may be dementia, the first thing to do is to contact your GP.

After several months of my family and I thinking of every possibility, I finally received a diagnosis. I was 50 years old and I was told that I had atypical primary progressive aphasia (PPA), or ‘mixed dementia’.

Sadly, on my consultant’s advice, I had to retire from work. After 22 years doing a job that I loved, this was so difficult for me. We’re also in the process of downsizing to a smaller house, as I was becoming confused with there being so many rooms in our current home.

Following my diagnosis, stigma around dementia has had a significant impact on my life. I used to love shopping but nowadays I find it’s just too stressful and upsetting.

Here are some instances when I have felt the impact of stigma:

When speaking with reception at a GP appointment, I was told that I needed to check-in using their new computer system on the wall. I attempted to do so, but became very confused as it was new to me.

The receptionist asked my daughter to take over. This was very frustrating for me as I wanted to check-in with the receptionist myself, as I always had done. I knew this was something I was capable of doing and I didn't want to lose this independence.

How we can fight the stigma around dementia

I honestly believe that we can make a difference to people’s attitudes towards those of us with dementia.

Many of us want to keep our independence for as long as we can, we want to enjoy life and not be worrying about what people are thinking of us.

Simple changes to attitudes and understanding of the condition can make a huge difference to our day-to-day living.

I don't feel that enough people are aware of early-onset dementia, never mind understand it. Some people are too quick to stereotype!

I'm sure that there will come a time when we all need a little bit of help from others; for some of us this has just come earlier than expected.

Read about the typical steps involved in getting a diagnosis, including what might happen if you are referred to a specialist.

Mistreatment and Abuse, Young-onset dementia, Wales
Back to top

Thank you for sharing your story , my husband was diagnosed with early onset at the age of 57. For 8 yrs he was able to carry on with duties at home . 2yrs ago I had to retire to care for him he is 67yrs now but sadly in Advance stages. I now do almost everything for him , it’s a lonely time for us both as friends stop visiting , he keeps going because he is so strong but his brain has deteriorated so rapid in the last year . I cry on my own because I know he would have never have wanted to be to dependent on anyone especially his family .

If you ever need emotional support, dementia information or advice, please call our Dementia Connect support line on 0333 150 3456 to speak with one of our advisers. You can find more details about the support line (including opening hours) here: https://www.alzheimers.org.uk/dementia-connect-support-line

In the meantime, you may also benefit from joining our online community, Talking Point, where people affected by dementia can share their experiences. You can browse the conversations within the community or sign up for free to post: https://forum.alzheimers.org.uk

We hope this helps, Carol.

Wow Debbie what an inspirational person you are. My dad had alzheimers and my mum had mixed dementia. I had to learn quickly and enter their world instead of trying to keep them in mine. I appreciate your voice for all who are going through what you and your family are going through. You are a teacher to us all. Thank you from the bottom of my heart. 💪🙌

thank you for this story my husband was diagnosed at the age of sixty; he is now 76. He has been in care for over 10 years. When this journey first began he did have a couple of TIA's, one of which he was bald on one side of his head. He had grey hair. when his hair grew back it grew back the same color as before he had grey hair. Also the hair on the other side grew with no grey hair. anyways, there came a time when he would not leave the yard(which was a good thing) then he wouldn't even go for rides in a vehicle. he did not want to leave home. Anyways, Its good to see your story. Not many people understand

i had no idea my husband had dementia it took about 4 years to get him diagnosed at the age of 56. He also suffered TIA’s He is now 62. Good luck to you on this journey. i found i take much joy in the good moments . Music is always a great ice breaker on the rougher days.

Debbie you truly are a beautiful and inspirational women. I work with gorgeous people who have dementia or memory challenges and I love it when I can enter their reality and just understand their world. We talk so much about dis ability and too little about different abilities . There isn’t enough on early onset and if I was the Alzheimer’s society I would be snapping you up As rarely have I read such an eloquent and thought provoking piece . Sending you thanks, positive vibes and just an overwhelming wish for you to be happy and safe 💚💚💚

This really resonates with my experiences with my husband who developed this disease at the age of 53.

Debbie, I am sure that much has changed over the last two years fo which I am sorry. It takes a lot of courage to make such a post.
I live in the US and have Lewy Body Dementia and as you are doing I am doing what I can do to make people aware of and remove the stigma of dementia. That you for your God given strength.

i have read your story.and it reminices with my husband who as just been diagnosed with early onset alzeihmers

Dear Debbie,
Thank you for sharing your story with us. I haven't gotten a diagnosis but some of these things you shared are familiar to me. I can only hope the doctor is wrong and that it is just stress, depression and anxiety causing forgetfulness.

Thank you all for your kindness and sharing your experiences with me. They've been invaluable. Some people have asked for the link for my Memory Walk on 5th October. I'm taking part in the walk with my daughters', Ffion and Carys along with other family and friends. The link is below:

Many thanks, and love to all xx

Thank you so much for sharing your story and bringing to light the everyday struggles that people with dementia face. My Dad was diagnosed a few years ago and it has been extremely difficult for him as well as our whole family. Normal tasks are difficult for him and I constantly worry about how other are treating him because he has problems remembering. It is comforting to know that there is a community that has similar struggles and are understanding in ways I only hoped.

Much love to you X we are all in this together! Stay strong! We can make a change😘 big hugs x

Hi Debbie,
Thanks for sharing this. Your story is really powerful and there are so many recognisable experiences from my own with family members who live with dementia, from the terrifyingly confusing episodes to just trying to maintain independence in a world that's just too busy to SEE people anymore (and has a really rubbish sterotyped image of who someone with Dementia 'is).
Sounds like you have fantastic family support (*waves at Ffion*), hope Caerphilly is on the memory cafe trail and that you're getting great, appropriate, professional help as well. Thanks again for writing this, just putting it out there will help so many people living with the same condition and have a great time on October 5th! (If you feel comfortable linking to your sponsorship page, would love to sponsor you directly) All the best xx

Hi Debbie. Thanks for your story. I was diagnosed with early onset Alzheimer’s disease aged 58 following over 20 years of struggling to be taken seriously. Now, I am still strong and living a good life (62) and cope very well. I had, and still do get people saying I don’t have dementia. I just ignore the comment. I would like to answer, “you don’t look like your ignorant but you are”. 😂 Stay strong and live your life as you always have. I always manage to find a solution to any difficulty I find. That’s how I cope. I wish you all the best.

I love your humour😂

What an inspiration. My husband, Alex, was diagnosed with dementia frontal local when he was 66. He is now 68. What a man. He still has a great sense of humour and loves his Alzheimer's Centre which he goes to 3 times a week. Keep up the good work Anne Morrison

Much love to you both x