A ground-breaking £20 million research centre will develop new technologies to create dementia-friendly homes and provide insights into how dementia develops. 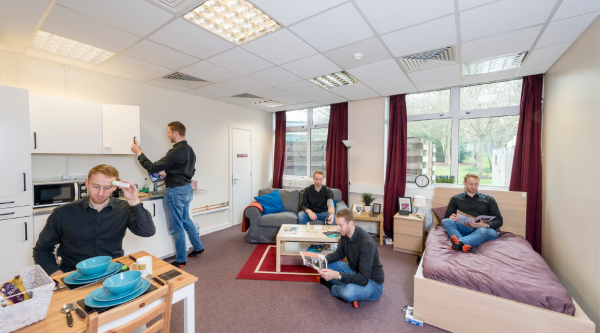 In April, the UK Dementia Research Institute launched a new centre as part of its Care Research and Technology programme. The centre, based at Imperial College London and the seventh opened as part of the institute, has received an investment of £20 million from the Society, Alzheimer’s Research UK and the Medical Research Council.

Alzheimer’s Society has been using its voice in the UK Dementia Research Institute to ensure that, as well as looking for treatments, we can also improve the lives of people living with dementia today through care, technology and public health research.

The Care Research and Technology centre brings engineers, doctors and researchers together with people affected by dementia. They will use technology such as artificial intelligence, robotics and wearable sensors to see how dementia-friendly homes could help people with the condition to live well at home for longer. We support the development of technology that won’t further isolate people with dementia, but which supports social interaction and improves quality of life.

Artificial intelligence will be developed that is capable to getting to know the habits and routines of a particular person. This could then pick up on changes such as infections, sleep disturbance or altered behaviour, allowing the care and support they receive to be adjusted.

Robotic systems will be used to create smart homes that allow voice-controlled interaction to support or enhance human interaction. This could include switching on lights, playing music or displaying photos, but also helping to keep the person safe by switching off the oven.

Find out what the benefits and difficulties of assistive technology are for a person with dementia.

‘Developing dementia shouldn’t have to mean losing your independence and your choice over whether to live in your own home. But we know there can be problems and we want to find solutions.’

The Care Research and Technology centre aims to develop technology that can pick up early signs so that people get the help they need before problems hit a crisis. One fifth of hospital admissions for people with dementia are due to entirely preventable causes such as falls and infections.

‘The new technologies will allow us to intervene at an early stage. What’s more we’ll be able to improve our understanding of dementia onset and progression.’

We look forward to sharing new developments with you as we work with our team of incredible researchers to improve care for today and find a cure for tomorrow.

Care and Cure magazine, Equipment and Technology, Support for carers
Back to top