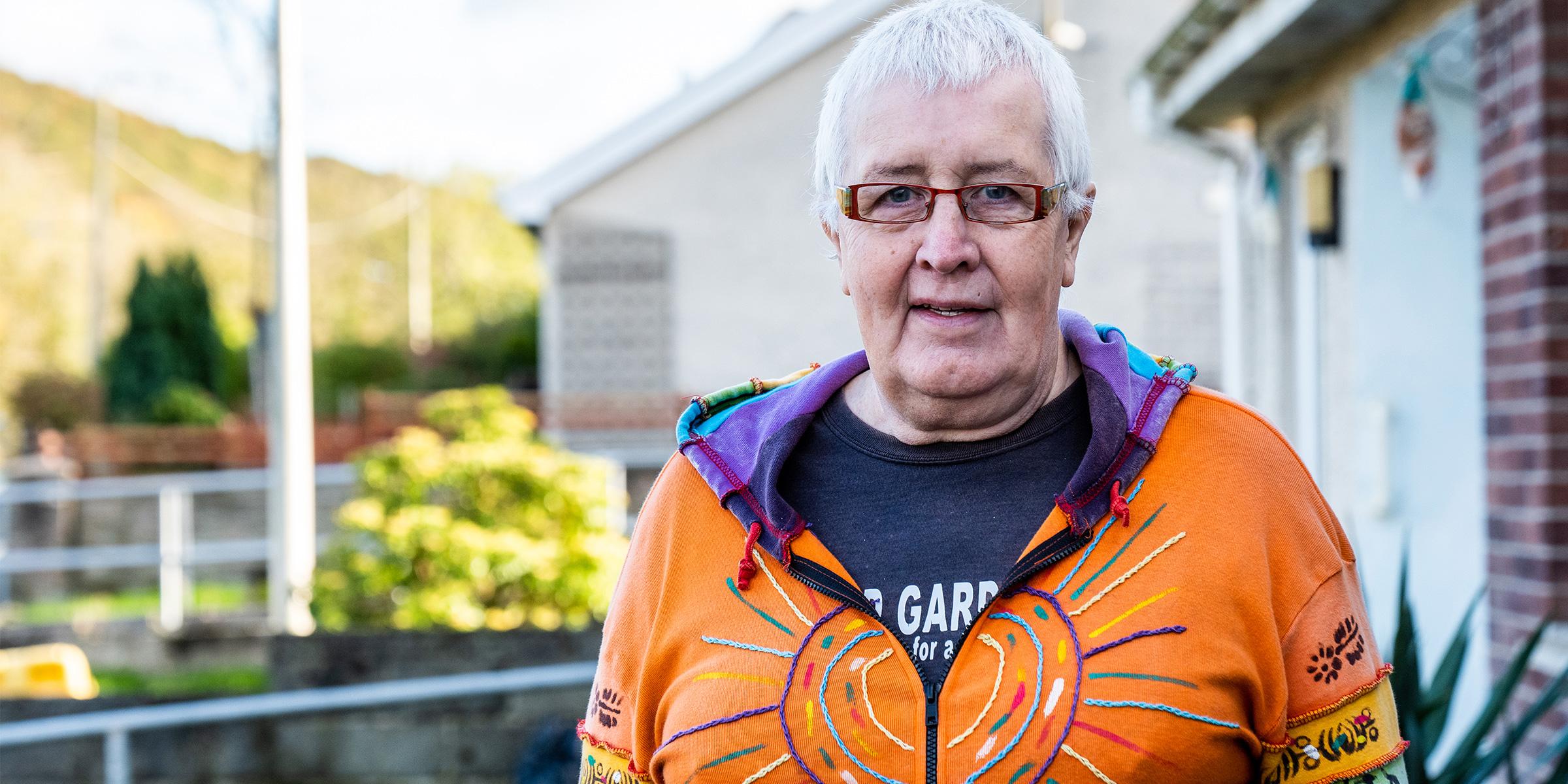 Andrea Elliott-Denham brings hard-won positivity to life with dementia, after a long journey to be recognised as her true self.

When Andrea Elliott-Denham was told she had Alzheimer’s, her main concern was for her partner, sitting by her side. Andrea could tell that Ella was overwhelmed by what she was hearing, struggling to take in the news and deal with what it would mean for their future.

Luckily, Andrea, now 67, was able to reassure her.

‘I’ve been a carer in homes for the elderly and many of the residents had Alzheimer’s, so the condition didn’t frighten me,’ she explains.

‘I often worked nights, which meant I had more time to spend with everyone I was looking after, and they’d tell me about themselves. So I know what can happen with dementia and what doesn’t always happen.’

Even so, Ella was in shock.

‘When we saw the Alzheimer’s nurse, I couldn’t hear what he was saying,’ recalls Ella. ‘So he came here for an extra visit and that’s when he told us about Alzheimer’s Society.’

With few resources close at hand in rural Ceredigion, mid Wales, the couple could have been left feeling isolated and alone, especially during the COVID crisis.

Instead, Dementia Adviser Aranwen Turvey provided information and advice and stepped in to advocate for them when needed. Ella was still worried about how quickly Alzheimer’s would change their lives. Aranwen was the perfect person to put her mind at rest, and she did.

‘It’s so important we can speak to the same person each time,’ says Andrea. ‘We have someone who’s easy to talk to, who knows us, so we don’t have to tell our story from the beginning each time.’

The Society’s help was particularly valuable when they realised how desperately they needed to move house.

‘We used to live up in the mountains, with no neighbours and a 20-mile round trip to buy a pint of milk,’ says Andrea.

‘Ella doesn’t drive and I had to stop driving because I was finding it too stressful. You’d think it would be peaceful in the country, but people here take blind bends so fast I couldn’t deal with it.

‘We’d been waiting for a year for the council to move us, but Aranwen knew exactly how to deal with them in our situation. A couple of weeks after we asked for her help, we heard about this bungalow.’

They are thrilled with their move south, just across Ceredigion’s border with Carmarthenshire.

‘We have a shop literally round the corner,’ says Ella, ‘The girls at the shop know Andrea and that she has dementia, and they help her if I’m not with her.’

Aranwen is also helping them establish power of attorney for Ella for whenever it may be needed.

The couple are settled in their new home, with their dog and cat, and a greenhouse built by Andrea’s brother, who lives nearby, to encourage her love of nature.

This is a level of contentment Andrea didn’t know in her early life, when she was brought up as ‘Andrew’.

‘I remember when I was three, I couldn’t understand why I wasn’t allowed to wear dresses like other girls. I’d ask my mum and she’d say, “Boys don’t do that.” I always felt I was in the wrong kind of body.’

She was bullied at school, and leaving at 14 was a relief.

‘I went to work in a café on our local pier. After the summer holidays the others working there went back to school. I stayed on and ran the place for the rest of the year, but I never wanted to settle.

‘I always had this feeling, “Maybe I’ll wake up tomorrow and be the person I should have been.”’

For many years, Andrea has also carried a deep personal tragedy. When she was 19, her eldest brother Nigel, who was two years older than her, died from carbon monoxide poisoning while in the bath of the flat they shared.

She spent so long comforting her mother that she hadn’t focused on her own loss. Little support was available in those days.

Andrea found a succession of jobs, with stints as a carer, a canal attendant and working in the House of Commons kitchen. She also ran her own antique shops.

Finally, 20 years ago, she had NHS support to transition and be recognised as Andrea.

‘I felt, “At last I am that person.” There was no more having to pretend. Such a relief. Besides meeting Ella, it was the best thing that happened.’

Both Andrea’s mother and father were supportive, though trans matters were less widely understood then.

‘I was quite surprised by my father’s reaction. He had a brother who was gay, and he struggled to accept him, but if my mother ever called me “Andrew” by accident, my dad would say, “No, it’s Andrea.”’

Facebook groups have provided Andrea with a great deal of support and companionship. It was on one of these that Andrea met Ella, who she welcomed immediately.

‘She was so friendly I thought she was the group moderator,’ says Ella, ‘We started chatting and we kind of found each other.’

They have been inseparable since, and Andrea describes Ella as her ‘rock’.

‘I was forgetting names. Searching for a word felt like looking down a black hole.

‘Then one day we were in town chatting to someone. We had a good conversation and I turned to Ella afterwards and said, “Who is she?” It was someone I knew well, who had a shop next to mine.’

Advice and practical tips for supporting an LGBTQ+ person living with dementia.

Andrea went to her GP and had a memory test, and later tests at hospital in Aberystwyth revealed Alzheimer’s.

‘My colourful clothes reflect my personality – and no one can lose me!’

On a more serious note, Andrea is clear why it’s important for her to speak out about Alzheimer’s.

‘One of the reasons is because I’m trans. I know there are people out there who have gone through what I’ve gone through, and they find it useful to read what I say.

‘We’re all different but there are a lot of similarities as well. If I can make a difference in someone’s life, that’s important to me.

‘The other reason I speak out is that without Alzheimer’s Society, life would be so much harder. They have been fantastic. We want to make sure people know this.’

Andrea spends a lot of time posting in Facebook groups about what’s happening in her life, most recently that her tastebuds have stopped working and that she sometimes hallucinates – symptoms she puts down to Alzheimer’s.

‘One of my brothers doesn’t like me being trans but, besides him, people just accept me. I’ve never worried about reaching out for help or support.

‘I don’t have a problem with who I am, and I don’t expect others to.

‘It’s all about being yourself and not being afraid to ask people who understand you for help – help is out there. No one’s going to judge who you are.

‘I’ll be standing up at the bus stop and start talking to people and they give you their life story. Complete strangers!’

Andrea hopes that anyone providing her care in future respects her for who she is.

‘I don’t worry about the future, apart from how it may affect Ella. I’ve asked friends and family to give support to her if things get worse. She’s my life.

‘I don’t want to lose the memories of Ella and the times we’ve had together, our wonderful days living on a canal boat and walking in the mountains, but we don’t get up in the morning and think “Alzheimer’s” all the time. You can’t obsess about it.’

Instead, she finds aspects of life that bring her joy.

‘When I garden, I push the boundaries by growing tropical plants including bananas, vines and foxglove trees.

£20 could provide 34 dementia guides for people affected by a dementia diagnosis.

I live on my own with my husband who is late stage Alzheimer's. I still take him shopping in a wheelchair to get out of the house, but he can't seem to go for long before wanting to go to the toilet, usually after I've just ordered a coffee & cake for us! Have got a RADA key now but would really like to have someone there for backup. Really miss face to face conversations with people. ☹️

Thank you for sharing your journey. It is very brave. We are coming to terms with my mum's dementia and trying to help her keep well.

Just great to read of your journey and all you have so beautifully created Andrea. Thanks so much for writing this.

Thank you for sharing my story. I hope it will help others with this horrible disease. Please donate to help find a cure .

You are an inspiration! Lovely to hear your story
keeping active as well as your positive outlook on life is fantastic

Andrea, I loved reading your story - it was so warming to hear that you found love and happiness, and that you found the way to the life that suited you best. I wish you a supported way forward, and that the love and happiness you have cultivated stays with you. My main experience of dementia has been with my mum, and something I often wonder about is if she had been able to find peace within herself, maybe it would have been different and less troubling for her.

I was lucky, having worked as a care officer with the elderly I knew what could happen. The most important thing is having the right support and information. I don't know what the future holds for me but I'm thankful for the support of family, friends and the Alzheimer's society. My thoughts are with you.