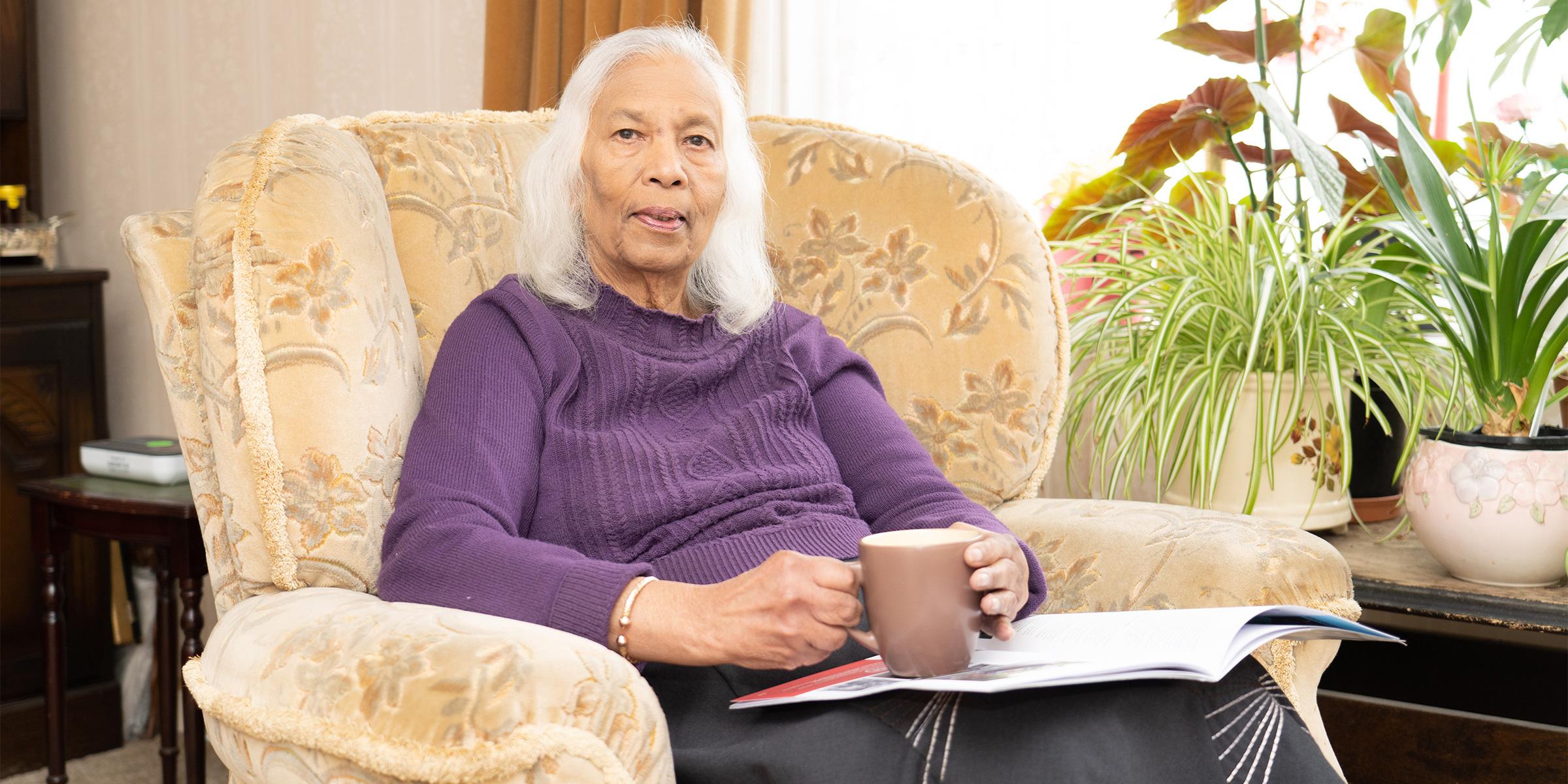 Shirley Williams is doing all she can to keep her mind as sharp as possible and refuses to let dementia spoil her life.

‘I know what Alzheimer’s is. I know it’s not going to go away. But you’re not going to sit there and cry, you have to help yourself,’ says 80-year-old Shirley Williams, who was diagnosed with dementia back in 2017.

She chooses to stay active and involved, maintaining a positive outlook on life.

‘There are plenty of places and clubs you can get different things from, to kick-start your brain matter,’ says Shirley, who lives in Brighton with her husband Bert. ‘You can still have your life.’

Shirley came to England in 1961, aged 19, to work as a nurse at Brighton General Hospital. She is from Guyana, a Caribbean nation on the South American mainland.

‘It was beautiful in Guyana, a lovely place,’ she says.

‘My grandmother had chickens and cows. In the school holidays we used to go and spend time there. We loved it!’

She also has fond memories of her time in nursing.

‘There’s a camaraderie – the people that help you along the way, senior people,’ says Shirley, who had a reunion with old colleagues about 10 years ago.

‘They wanted you to actually do something with your life. Our ward sister would come into the room and make us study!’

Shirley worked as a midwife and as a night sister in a nursing home. She also used to run a nursing agency, during which time she made a very surprising discovery.

‘I found a baby on the doorstep!’ she says. ‘I was working and somebody came in and said that there’s a baby outside. She was a tiny baby. I thought blinking hell! She went to hospital, but I don’t know what happened to her in the end.’

Shirley is married to Bert, who is from Jamaica. They met in 1963 when Bert, an RAF chef stationed in Germany, attended a party organised by his sister, who was also a nurse in Brighton.

They married in 1967 and have two children and two grandchildren. Bert, who has an MBE, is a local historian who co-founded the Brighton and Hove Black History group around 20 years ago, to present the multicultural history of the city.

Bert says that Shirley used to be a brilliant cook, making rotis, chow mein, tandoori chicken and rice and peas, food that was devoured by his cricket team.

Shirley recalls, ‘They would come to the house and gobble what they could find. Eat you out of everything!

‘I used to do lots of night duties. I’d turn around and say who the bloody hell are these drunk people in my house?!’

Shirley no longer enjoys cooking, which is one of the ways in which having dementia has changed her life.

She was diagnosed with Alzheimer’s in 2017, following tests and a brain scan, after her children noticed that she was repeating herself and got her to visit the doctor.

Bert says that Shirley isn’t as talkative about her younger life as she used to be, and she can also sometimes get lost while out, for example getting off at the wrong bus stop.

‘Daytime is alright, but dark evenings are a bit scary, when nobody’s around. You think, “Where am I going?” You’re probably only about two doors away.’

The pandemic didn’t help matters either, with restrictions limiting Shirley’s time outside of home. When these were relaxed, she had to adjust to going out again.

‘Lockdown was such a long time – so many weeks of not being out, but after doing it once or twice you get used to it again,’ she says.

Shirley can get confused in the house at night and at times she has fallen, thankfully with Bert always on hand to help.

‘I’ll pick her up or stay with her,’ says Bert who, due to needing dialysis, has his own lengthy medical appointments twice a week but doesn’t feel he currently needs any professional help caring for Shirley.

‘We could get someone to sit with Shirley during my dialysis, but she doesn’t want anybody in the house,’ he says.

Bert says he can generally manage fine on his own, though the couple’s son visits regularly and helps with things like shopping.

Shirley remains involved around the house, helping to prepare meals for Bert to cook, and doing plenty of housework. She also does puzzles and reads books. She is active outside of home as well, and prior to the pandemic was part of a book club.

Shirley and Bert created an oral history project about the nurses who came to Brighton from the Caribbean in the 1950s and 60s. And they were both recently interviewed about their piece of work.

‘Your memory shoots up – you can remember that part of your life,’ says Shirley.

She and Bert are members of a Black, Asian and minority ethnic elders’ group for over 50s, as well as D-Mob – a peer support group for local people affected by dementia. D-Mob meets regularly as part of DEEP, the Dementia Engagement and Empowerment Project network.

‘You have a good old chinwag, then it splits into people who are diagnosed and the carers,’ says Shirley. ‘It’s a nice club. A man came along and told us about history, the old days.’

As well as welcoming external speakers, the group visits other venues and organisations to help them become more dementia friendly. Bert says that a local library and hotel made changes based on their suggestions.

‘I think it’s good. Dementia’s top of the list now,’ laughs Shirley, who feels that the general public don’t always have a good understanding of the condition.

Shirley has appeared on stage at a dementia conference and in a film about dementia-friendly bus travel in Brighton. She has no qualms about sharing her experiences of dementia publicly.

‘You can rabbit about something, and if it’s wrong somebody else can put you right, and that’s it,’ she says. ‘And if I forget something, tough luck.’

Shirley’s advice to other people with dementia is to try to not let it bother them, and to carry on as usual as much as possible. Staying connected to others is also important.

‘Don’t isolate yourself – meet with like-minded people,’ she says. ‘People you can sit down and talk with, and you know they won’t judge you about anything.

‘And if you want help, there’s places you can get it.’

As she enters her 80s, Shirley is certainly practising what she preaches.

‘I'm getting old, but I'm doing everything I wanted to do,’ she says.

£58 could provide a Dementia Voice session for people with dementia to influence our and others’ work.

England, Alzheimer's disease
Back to top

This is my mum! So thankful for your kind comments, she loves hearing the a and is very proud of this. She went from a diagnosis a few years back of not wanting anyone to know to doing a few bits to raise awareness. So very proud of her.

Shirley is an inspiration. With regard to last comment, My Mum worked in NHS for 40 years. She did lots of research and am sure she would be happy to participate in a research project as a participant rather than organiser. how do we sign up?

It is great to hear about Shirley Williams and her positive attitude towards her illness. I am a couple of years younger than Shirley, and was diagnosed about two years ago (I am not good at remembering dates!). I was very gloomy at first, and was dismayed when my partner said she thought I should move into sheltered accommodation. However, it has been much better than I expected. I have a room in an Abbeyfield house, and my main meals are provided. I work in the garden and have a (tiny!) workshop in a former coal-hole - not ideal, but space is short. Abbeyfield provides our main meals, and we all have a small fridge for drinks and snacks.

Yes, I regret my loss of freedom, and to start with I hated my new life. But I have settled down and am not nearly as grumpy as I was!

I must add that I have joined a research project and am currently on a trial drug. I can't say it is having much effect, but of course I might be on a placebo. I find it very cheering to be doing something about my illness, and recommend other sufferers to join a trial if they are able. I must add that researchers are often looking for patients of a particular age, gender etc, so one mustn't fuss if you aren't chosen straight. Get your name on the list, I say, because it's a lot better than doing nothing about our wretched illness!