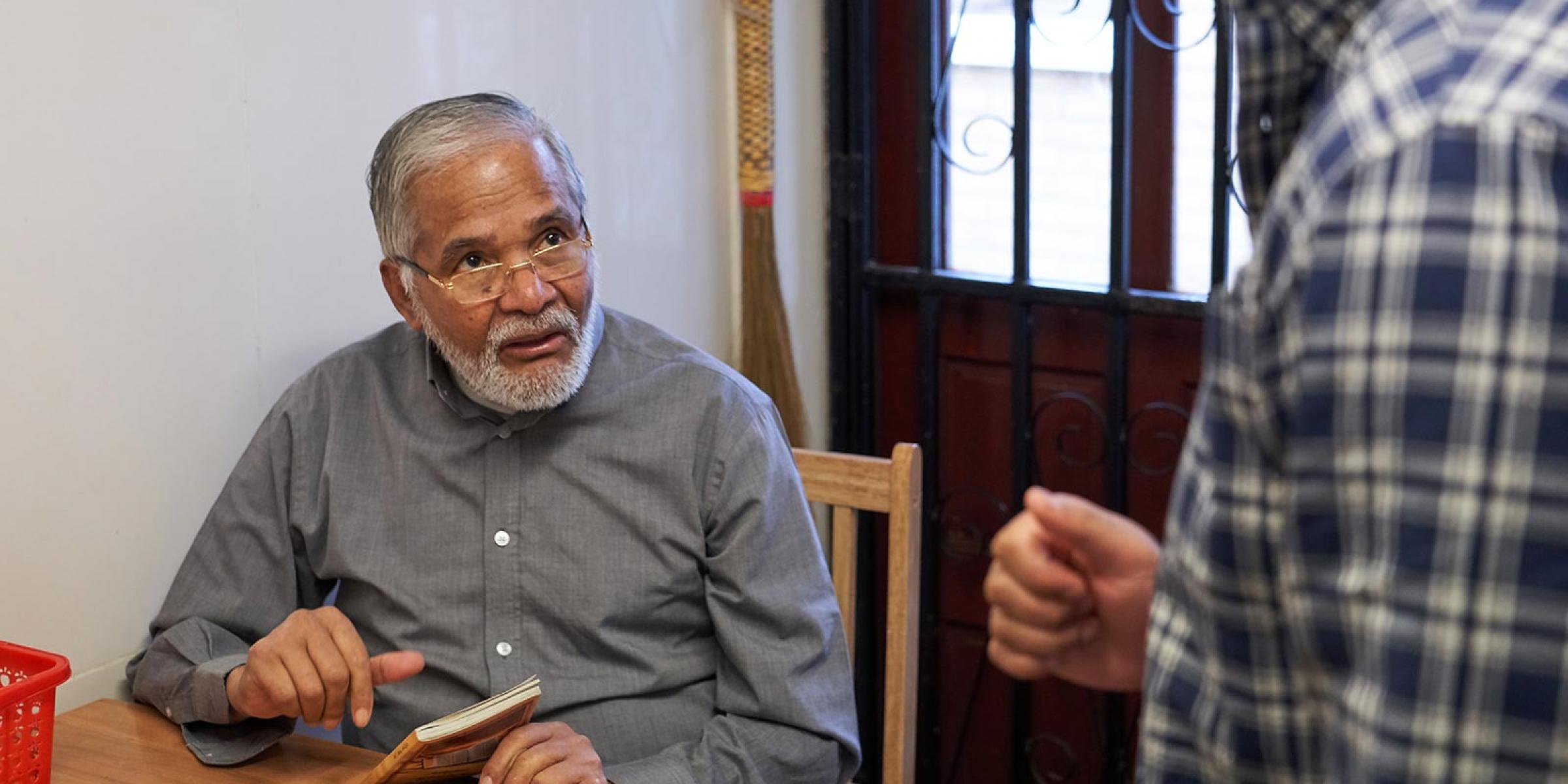 Information
Losing your English: ‘Reverting’ to your mother tongue as dementia progresses
Dementia together magazine: June/July 19

Dementia can affect how well a bilingual person can communicate in their second language. Read our advice for a reader whose father is losing his English language.

‘My father’s dementia means he’s been losing his English language, which he learned as an adult, and only speaking or understanding his mother tongue.’

Dementia may have unexpected effects for people who speak more than one language, and an increasing number of people in the UK learned English or Welsh as a second or later language.

On the whole, speaking more than one language can delay many symptoms of dementia. Being bilingual means that your father could have built up more ‘cognitive reserve’ than those of us who speak only one language, making his brain more resilient to changes as his dementia initially developed.

However, people do experience changes in language as dementia progresses, and this includes multilingual people.

The dementia guide is available in languages other than English, for anyone who has recently been told they have dementia.
Read more

Even someone who has spoken a second language for years might start to drop in words from their mother tongue, perhaps unknowingly. Over time, the language that’s less familiar and not so deeply embedded tends to be lost first. This is often the language that's been learned later on.

As with your father, this could mean that a person eventually finds it difficult to communicate in one language while still being able to do so in another. The impact of losing the ability to communicate in the language that most people around you speak can be severe.

As long as you have some people around who understand your mother tongue, you can still tell them about practicalities such as what you’d like to eat or do. Importantly, you can also share your thoughts and feelings.

Language is a fundamental part of our human experience. If no one around you understands your remaining language, you may begin to feel isolated, lonely, confused, frustrated or depressed.

Tips: communicating with someone with dementia

Includes advice on communication that doesn’t rely on words.

The most obvious way to keep communication going is to ensure there are people around your father who can speak his first language, though how easy this is depends on where he is.

There may be times when an interpreter, in person or over the phone, could help your father to communicate. It’s worth asking for this from services, especially for appointments and conversations that affect his care. If your father reads in his first language, there might be translated materials to help him understand a situation and make informed decisions. Some people find technological solutions useful, such as translation apps on mobile devices.

Maximising communication that doesn’t rely on words, such as facial expressions, hand and body gestures, pictures and symbols, can also help. Any communication that allows the person to express themselves is precious and can have a big effect on their wellbeing.

Communication, Language problems
Back to top

I live in the US, but my grandfather was born in Korea when it was a Japanese colony (he is 88 years old). It's been very sad to watch him lose his command of English (his third language after Japanese and Korean) over the last few years. And now, he cannot communicate in English at all. He used to ask people to refer to him as "James" instead of his Korean name. But now, he doesn't remember either of those names anymore, and will only respond to someone calling him by his Korean last name or the Korean words for "brother" or "son".

He does not remember his time living in the UK back in the early 1960s as a staff member in the South Korean embassy in London. He has forgotten when he immigrated to the United States and often refers to his current residence in North Carolina as "Gangwon-Do", which was his childhood home state in Korea. Most of the days are spent with him crying and wondering where his parents went, and when he will be going to school. It's as if his brain has gone back in time and is now in his six-year-old state of mind, and only becoming more infantile with time.

His in-home caretakers have tried to look for a Japanese-speaking staff member, but they are all in Hawaii or California and none are willing to relocate to North Carolina to help him. He cannot take a flight back to Korea because he does not remember a single living relative there and he has too many medical dangers that prevent him from flying on an airplane (in addition to being ultra-high risk for COVID).

Some would say the burden of Alzheimer's is on the caretakers, but truly my grandfather has to be enduring the worst form of hell possible because he is in constant agony, pain, confusion, and tears. He does not know why. No one in our family knows what to do with him and he seems to be in a uniquely constrained position. He is not even wheelchair bound. He still walks without a hunched back, walks everywhere he can (whenever he's not wandering), and seems to have the energy of a young child.

Luckily, the cost of care hasn't been an issue, but everyone we know wishes the old version of him would come back. The last time I saw him in-person was January 2020 and ever since then, only my father and my uncles have been able to see him from six-feet away due to his extreme COVID risk. I hope to see him again soon without putting him at risk, but it just pains me to think of the hell he is going through.

Thank you for sharing this with us. It sounds like a really difficult situation to be in.

As you are based in the US, we'd recommend contacting the Alzheimer's Association 24/7 helpline: https://alz.org/help-support/resources/helpline They can offer you confidential support and information.

You might also benefit from joining our online community, Talking Point. There, you can speak with other people who have been or are currently in similar situations. For example this thread may be of interest: https://forum.alzheimers.org.uk/threads/reverting-to-her-mother-tongue…

Talking Point is the ideal place for carers and people affected by dementia to share experiences, advice and offer support. You can browse the whole community without registering, or sign up to become a member and post: https://forum.alzheimers.org.uk/ It's free to use, and open day or night.

Wishing you all the best.