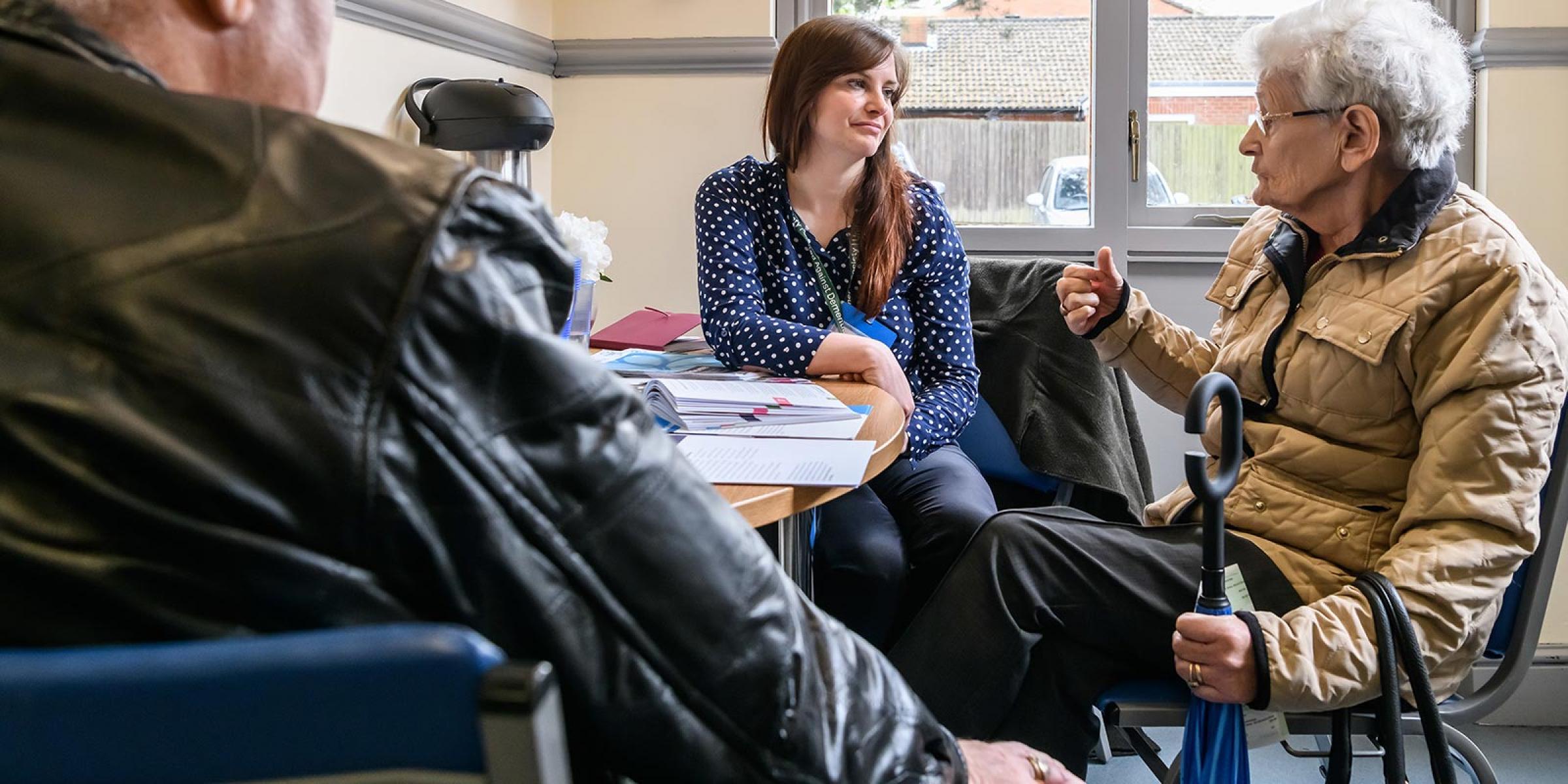 GPs in Birmingham are helping Alzheimer’s Society to provide the right support at the right time through our Dementia Connect service.

We want to be there for everyone affected by dementia in England, Wales and Northern Ireland by 2022. Our new service, Dementia Connect, is central to this ambition.

Dementia Connect provides support and advice in person, over the phone, in print and online, and we keep in touch to make sure people get the help they need as things change. It also brings people with dementia together with volunteers through Side by Side, meaning they can carry on doing the things they love in their community. Although it’s not available everywhere yet, we’re introducing Dementia Connect to an increasing number of areas.

Of course, people need to know about the service in order to benefit from it. GPs can play a vital role by referring people affected by dementia directly to us as early on as possible.

Birmingham and Solihull were among the first areas to introduce Dementia Connect, and our relationships with local GPs have been important to its success.

‘When we first started talking to GPs, they were aware of Alzheimer’s Society’s research and campaigns, but not so much the fantastic support on the ground that can help people live well with the condition,’ explains Mary Keddy, a Dementia Support Manager.

‘We spent a lot of time building strong relationships with some fantastic GPs – taking the time to get to know each other and find out more about their experiences of supporting people with dementia and carers.

‘Everyone is more in the loop now. Between us, we can support people at the right time.’

‘No matter what people with dementia need, we’ll find it for them,’ says Mary.

‘We’ve gone from giving patients a printout where they had to instigate contact with the Society themselves, to a real integrated service,’ she says. ‘Alzheimer’s Society is now seen as a first point of contact for our clinicians.’

‘For GPs it’s not a matter of being asked, “Who does this?” or, “Who do I go to for that?” Dementia Connect takes that away,’ she says. ‘No matter what people with dementia need, we’ll find it for them.’

Dementia Connect is all about people affected by dementia getting the right support at the right time. Elizabeth says that an early referral to the Society – even before a formal diagnosis – can provide consistency and familiarity.

‘It has allowed GPs to bring up the topic at earlier stages in consultations, as they feel there is something there that can really help patients in practical terms,’ she says.

‘Families feel that something is being done right away,’ says Elizabeth.

‘The patients have support throughout the whole process, and are prepared and able to understand their diagnosis and prognosis with less anxiety. Families also feel that something is being done right away.’

‘It also gives Alzheimer’s Society the opportunity to highlight any patient issues that we were maybe not aware of, so we can improve their care.’

In addition, GP reception staff now have somewhere concrete to direct people who are having problems that wouldn’t require a doctor.

Admin and reception staff at Midlands Medical Partnership – which covers Erdington and 10 other surgeries – have become Dementia Friends, as well as taking more in-depth training.

For one carer in Birmingham, whose wife was diagnosed with young-onset Alzheimer’s in June 2015, regular support from a Side by Side volunteer has been particularly useful.

‘Being a carer is not an easy journey,’ he says. ‘You’re trying to fill someone’s time, 24 hours a day, seven days a week.

‘It’s lovely to have a new mind who can stimulate her and take her to new places. She gets a lot out of it – she comes back pretty chirpy, and I get two or three hours off.’

People’s feedback about Dementia Connect has helped us as we introduce it into more areas.

‘It felt like a light at the end of the tunnel for us to talk to someone about our concerns,’ says one carer.

‘I can contact the service and ask questions, or seek advice and support, whenever needed or when things change,’ says one person affected by dementia.

Another says, ‘It felt like a light at the end of the tunnel for us to talk to someone about our concerns with the changes that have been happening to my auntie.’

These kinds of comments resonate with the feedback Elizabeth has been getting from her patients.

‘The support from Alzheimer’s Society has a positive impact on their quality of life and helps them to prepare at such a difficult time,’ she says.

‘With GPs and Alzheimer’s Society working together, it’s a far more positive journey.’

More practical and emotional support near you

Dementia Professionals, Visiting the GP
Back to top

The Alzheimer’s Society provides great support and information and has helped me become more informed about this awful disease. I was involved many years ago with people who had dementia and I wasn’t aware of such a society. Now we are more clued up, everyone can help in their way to make the charity a success. 🙏 Thank you for being there and creating awareness of this devastating disease that needs recognition along side Cancer, Parkinson’s, Multiple Sclerosis, Motor Neuron and many other known diseases.