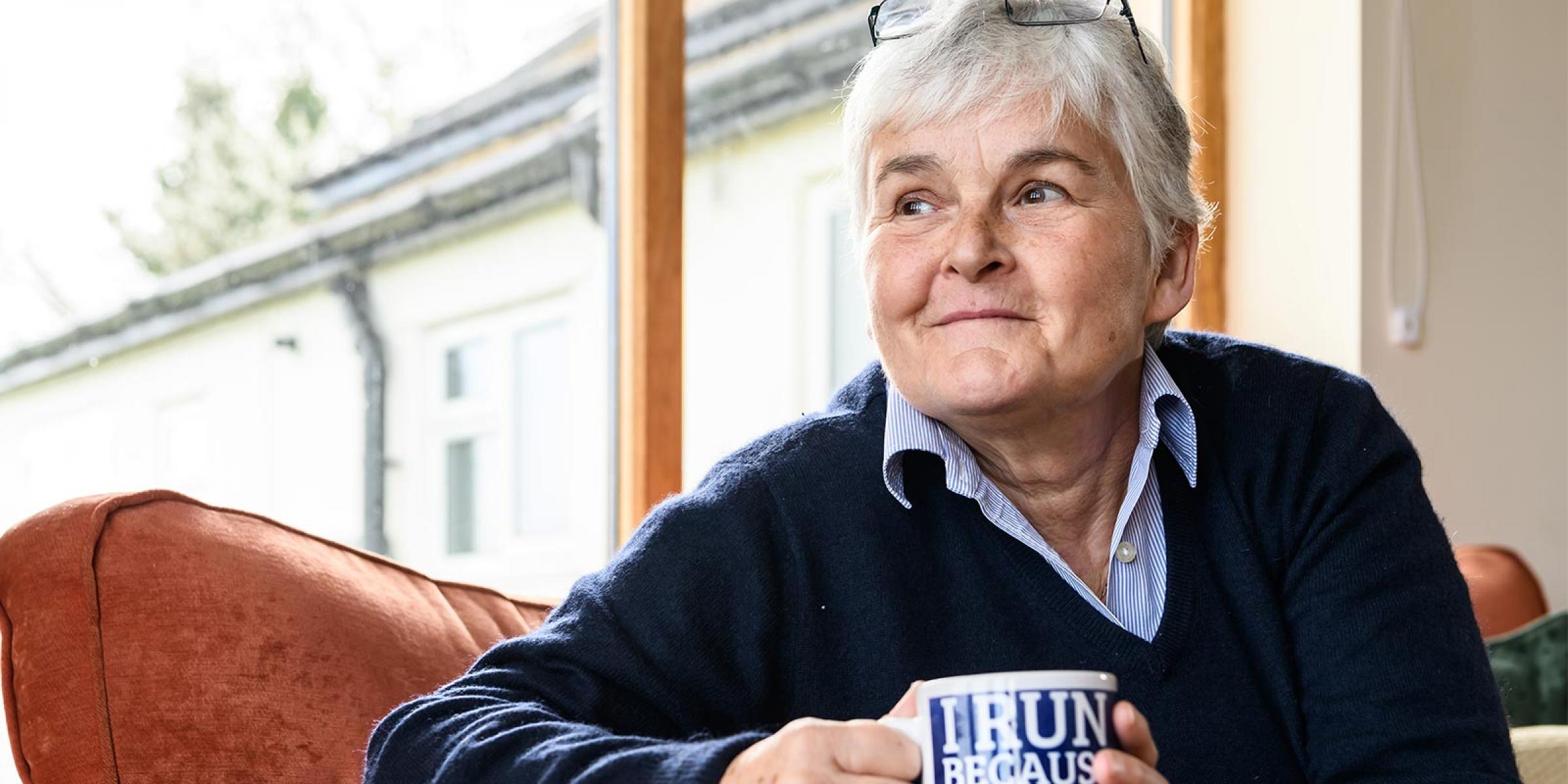 After initial denial and dread about her dementia diagnosis, Sue Strachan’s awareness raising now includes appearing in a TV series and being an ambassador for Dementia Revolution.

‘My father was always very insistent that we pronounced it “Strawn”, because our family are from north of the River Tay,’ explains Sue Strachan, discussing the history behind her Scottish surname.

Sue is certainly no stranger to challenging misconceptions or setting the record straight. She has dedicated herself to improving people’s understanding of dementia since her diagnosis with the condition nearly five years ago.

Press the orange play button to hear this story in Sue’s own words:

Sue, 63 and originally from Surrey, lives in Herefordshire with her partner Sheila. Sue’s career centred on books, including 11 years as a sales rep for publisher Ladybird.

She enjoys reading crime novels and listening to music, and she played a lot of hockey over the years. ‘I was in goal, which meant I didn’t run very far!’ she says.

Sue describes herself as a sociable person who likes to make people laugh.

‘I like to think I’m amusing and quick-witted, as well as kind and caring,’ she says. ‘I’m quite emotional and can be slightly grumpy from time to time.’

Sue has been with Sheila, who runs her own training consultancy, for nearly 27 years.

‘We’re very different and have very different interests,’ says Sue. ‘Sheila is much more cultured than I am. She likes history, opera and theatre – none of which I enjoy! But I think the differences have helped make the relationship work.’ 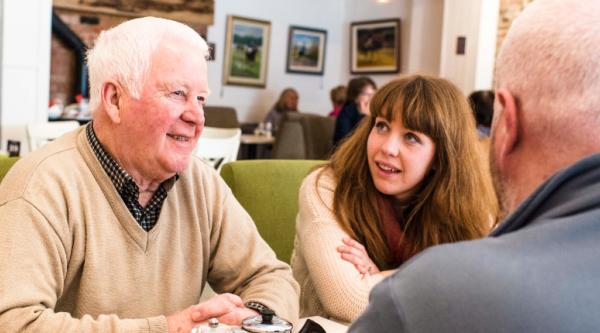 Advice
Do you know a person with dementia or memory problems who is refusing offers of help? Here are a few ways to support someone who may be in denial about their situation.
170

‘I had driven from Hereford to Surrey and stayed the night at a friend’s. We’d chopped down a tree,’ says Sue. ‘After the TGA, I had no recollection of any of it.’

Hospital staff told Sue she’d make a full recovery but it soon became clear that she wasn’t functioning as normal, including repeating herself and struggling to find the right words.

After 19 months of GP visits, appointments with clinical psychologists and a series of tests and scans, Sue was diagnosed with vascular dementia in September 2014, aged 57.

‘I spent quite some time in denial, not believing they’d got it right,’ she says. ‘My previous experience of vascular dementia was an aggressive elderly neighbour. My father also had what was then called “senile dementia”. So my stereotypical view was that dementia was old people who forget things.’

Although eventually relieved that the problem had at least been identified, Sue also felt a sense of dread.

‘I didn’t have the belief at the time that I could do anything positive with it,’ she says.

Dementia affects Sue’s life in many ways, such as leaving her very fatigued in the afternoon and usually needing a nap.

She says her ability to deal with numbers is now ‘abysmal’, and she doesn’t have any concept of the value of money or passing of time. Sue has poor concentration and sense of direction, and she sometimes struggles to find a word or repeats herself.

‘My confidence has taken quite a knock with the dementia,’ says Sue.

‘My confidence has taken quite a knock with the dementia,’ she says. ‘People would think that I’m very confident because I come across as an extrovert, but I’m not really.

‘I can often put on a good public face, which makes people question my diagnosis.

‘I do have some very dark days. Very often I will say to Sheila, “It doesn’t feel like a great day today.” But I could be an awful lot worse off.’

Inspire others to help people live well with dementia

Sue has received strong support from all sides.

‘My family are absolutely key and most of my friends have been fantastic,’ she says.

‘I don’t know how I’d cope if I didn’t have Sheila,’ she adds. ‘We call her my “carer” in a slightly amused fashion. But she is, because there are things I can’t do without her support.

‘I worry much more about her than I do myself, because she’ll have to live with the changes in me that I probably won’t be aware of.’

Sue says that the nature of her condition means her health could deteriorate very suddenly. Although it wouldn’t be the right thing for everyone, Sue’s pleased her doctor has put a ‘DNR’ order in place for her. This says no one should try to resuscitate Sue if her heart or breathing stops, something she’s in agreement with.

‘The idea of being trapped inside my body and not able to communicate is terrifying, so I’m a lot happier now I have the DNR,’ she says. ‘I think it’s important to address things now while I still can.’

Having concluded that she can indeed do something positive, Sue has been promoting and raising funds for dementia research. She is also a Dementia Friends Champion, delivering Information sessions to local organisations and businesses to raise awareness and bust myths.

‘I don’t tell them until the end that I have dementia. It’s quite impactful,’ she says.

Sue is an ambassador for the Dementia Revolution – our partnership with Alzheimer’s Research UK that’s charity of the year for the 2019 London Marathon. Money raised will help fund the UK Dementia Research Institute.

‘I think the Dementia Revolution campaign is amazing,’ she says. ‘I’m passionate about research. It’s possibly too late for me but not for the next generation. Researchers are making great strides – there are little things happening regularly at the UK Dementia Research Institute.’

‘I needed a challenge and my GP had advised me that the only thing I could do to help my condition was to keep fit,’ she says.

‘I had no idea how hard the marathon would be. I still don’t believe I did it! It’s probably the greatest achievement of my life so far. I have a huge sense of pride.’

Sue also took part in a Channel 4 programme, The Restaurant That Makes Mistakes. The five-week experiment brought a group of people with dementia together to run a restaurant, serving celebrity guests and members of the public.

The programme makers aimed to have a positive impact on how dementia is viewed. Sue admits to having had initial concerns about being involved.

‘I was very worried about any possibility of it being edited to make us look like idiots,’ she  says. ‘But it became very clear that the TV company wanted to make sure that this programme portrayed us as we really are.

‘We’ve been given the opportunity to watch the episodes before they are televised and it’s a very fair reflection of what happened.’

Supported by Michelin-starred chef Josh Eggleton, team members were trained to take on specific roles, with Sue working mostly behind the bar.

‘The programme was exhausting, emotional, hilarious, fun and heartbreaking at times,’ says Sue.

‘Initially I had real reservations about managing my own condition while helping colleagues, but we worked together really well as a team,’ she says.

‘For me, the most challenging was the day Josh wasn’t going to be there and I became the leader. At one point it got too much emotionally and I lost it, but that day finished up well.

‘It was exhausting, emotional, hilarious, fun and heartbreaking at times. But my overriding feeling is what fun we had. And I hadn’t realised what a potty mouth I am!’

Sue sees her TV appearance as another platform to spread her message.

‘I hope it will make viewers more aware of the different types of dementia and that people do have something to offer and can still work,’ she says.

Sue will continue to raise dementia awareness in the belief that she can make a difference.

‘I know that sounds incredibly worthy, but it’s true,’ she says.

‘My story seems to have struck a chord with people. If I can get out there and bang the drum a bit – all to the good.’

LGBTQ+, Vascular dementia
Back to top

I have dementia. Just wanted to get some tips and learn about dementia. I was
Diagnosed as having dementia. Have an appt. In June to see if it is alzheimers.