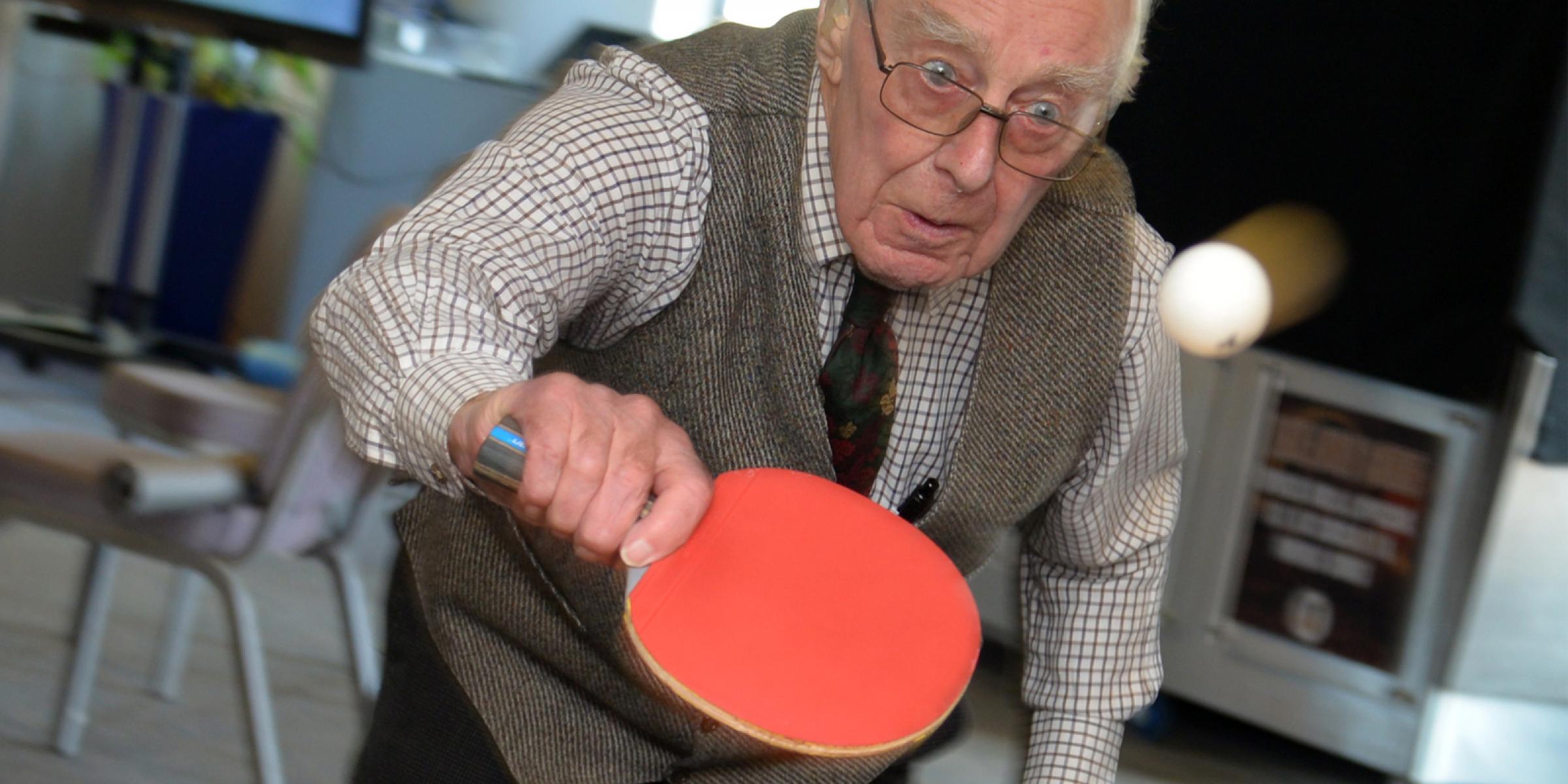 A game of tennis is in full swing by the side of the pitch at Sixways Stadium in Worcester, West Midlands. The nearby clubhouse is the venue for some impromptu indoor football, while a couple of therapy dogs are on hand for those who prefer some interaction with animals.

This is the Tackling dementia sports café, a free weekly group for people with dementia and their relatives or carers, run by Worcester Warriors Rugby Club. It offers members mild physical activity, mental stimulation and a chance to socialise.

‘We plan it loosely – we don’t want to control people,’ says Simon.

The café is led by Simon Northcott, the club’s Disability and Inclusion Lead, who had the idea after becoming a Dementia Friends Champion.

‘We plan it loosely – we don’t want to control people,’ he says.

Cricket and table tennis are also on offer, while some prefer to draw or simply chat over a hot drink. Within half an hour, dozens of attendees, staff and volunteers are engaged in physical and social activity.

Today is the café’s first birthday, with food and cake put on to celebrate. Trudie Jennings and her late husband Alan, who had Alzheimer’s, were one of two couples who attended the very first session last year.

‘Alan enjoyed it here so much,’ says Trudie. ‘He was quite reluctant to go to some places, but this took him back to his days of rugby and hockey. It’s quite unique.

‘They take an interest in people’s interests. They brought in a blow-up hockey stick for him. They were so kind.’

Nickie Attwood used to attend with her late grandad Stan Ballard, known as Pops, who had vascular dementia.

He enjoyed playing skittles and football at the café and was the referee for some games.

‘He absolutely loved it here – he was full of smiles. It seemed to set his mood for the rest of the day,’ says Nickie, who also benefitted from attending.

‘It gave us bonding time and somewhere we could go together that wasn’t a hospital or doctor’s appointment.’

Use our online directory to find services for people with dementia and carers.

David Gunn, 86, who has dementia, attends the café with his wife Philippa.

‘There’s a space for physical activity, which is what attracts me,’ he says. ‘I still try and keep physically fit.

‘It’s also the fact that I’m not the only person in the world with dementia. I’m happy to socialise with people with a similar condition.’

Philippa agrees that David benefits from such interaction.

‘Since his dementia he’s becoming more isolated at home, but he loves it here,’ she says. ‘It gives him a sense of purpose for the day.

‘The fact he’s in a good place also makes it easier for me.’

‘David loves it here, it gives him a sense of purpose for the day,’ says Philippa.

Anne Molloy has been visiting the café with both of her parents. He mother Hilary, 87, was diagnosed with dementia seven years ago. Her father Pat, 92, doesn’t have dementia but loves rugby and used to play for Worcester in the 1950s.

‘Simon is so patient with Mum – he devises different games for her and encourages her with different techniques,’ says Anne.

‘Everyone is included and accepted here. Dad will push Mum round the pitch in her wheelchair. They feel part of it.’

Shirley Garbett attends the group with her husband Bill, 80, a keen former sportsman who has dementia with Lewy bodies.

‘Bill is much happier afterwards and it helps us carers too,’ she says. ‘We all know we’re in the same situation.

‘The group is brilliant, fantastic – you can’t describe it.’

The café is supported by a team of passionate volunteers. One of them, Edward Bunn, has hydrocephalus, which involves a build-up of fluid in the brain and can be a rarer cause of dementia itself.

‘I talk to people and help with the games. I’m just a part of the community,’ says Edward, 68.

‘I consider myself extremely fortunate that my situation is under control and I can help out. I think I have an understanding of where these people have been or are going.’

‘I think I have an understanding of where these people have been or are going,’ says Edward.

Val Wellings, a Dementia Friends Champion, is another volunteer at the café. She says the group helps its members to live well with dementia.

‘We’re providing the space, environment and people,’ she says. ‘It’s about tapping into their reality, what’s important to them.’

Elsewhere at the club, one of the stadium’s corporate boxes has been given over as a safe place to people who want to watch the rugby in a less noisy or crowded environment.

Simon and Val have helped create over 100 Dementia Friends among the club’s staff, volunteers and players. The club is also part of its local dementia action alliance –  organisations that have come together to make their community more dementia friendly.

‘The whole club’s values are based around inclusivity,’ says Simon. ‘The evolution of this project just never stops.’

Exercise and Physical activities
Back to top

An EXCELLENT initiative! I've been once as a visitor & am looking forward to visiting again.......next year! Meanwhile have a GREAT Xmas. John.