People with dementia and carers try out reusable stickers for use as signs at home and elsewhere. 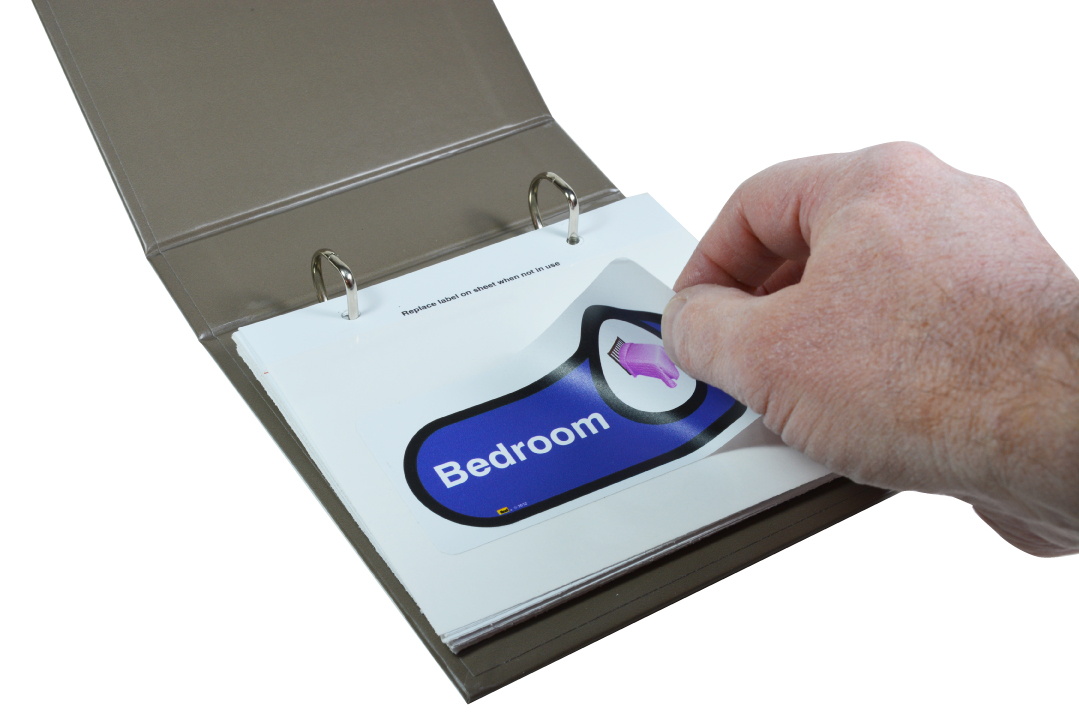 We visited the Co-production Group at Merton Dementia Hub in south London to get their opinions on two sets of self-adhesive dementia-friendly signs. The signs can be stuck onto most surfaces and are reusable.

One set of small-sized stickers is already available in our online shop, but we also took a larger set that is still in development. This means the group's feedback will be able to influence what the larger signs end up looking like.

Shop for stickers and other daily living aids in our online shop. 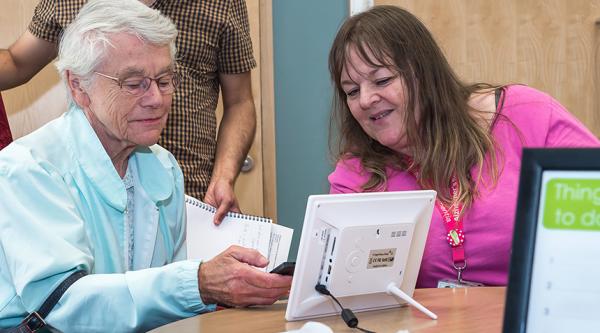 The set of smaller stickers comes in a book, with 20 cupboard and drawer labels, 10 door labels and six coloured surrounds for light switches. Intended for home use, they include pictures depicting rooms and the contents of cupboards or drawers.

Myrtle said these labels would be useful at home, such as the one showing where cutlery is kept. Deirdre agreed, adding, 'Or showing where the socks are!'

Deirdre said the signs could be ideal for her and her husband, as they are moving house soon and will have to get used to a new layout.

Myrtle said she already made labels for things around the house, and Raksha asked whether the set could include blank stickers that people could write on. Jon, from our online shop, said we also stock Magic Whiteboard A4 sheets and an A5 Magic Notebook - these can be written on, erased and reused.

Peter thought the pictures on one of the kitchen cupboard stickers might not be obvious to everyone.

'The picture could be of something more instantly recognisable,' he said. 'Food like bread, fruit and vegetables rather than tins and other packaging.'

People with dementia agreed that some of the pictures could be improved. Ann said the showerhead image isn't clear, but adding water coming out of it might help.

Sandra liked the utility cupboard picture, which features a vacuum cleaner and ironing board. However, Brian questioned whether these would necessarily be in the same place, and Irene thought many people wouldn't be able to fit an ironing board into this kind of cupboard.

Bob could see the signs being useful for him and others in the group once their dementia becomes more advanced, adding, 'I don't feel we're there yet though.'

People with dementia try out games and gadgets 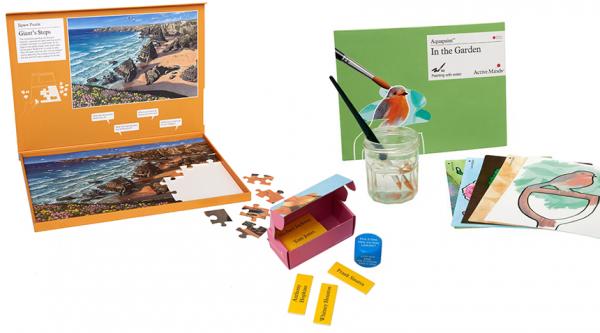 Information
A south London activity group tries out a range of games and some gadgets that speak the time.
0

The design of the larger signs is still being developed, and the group had a lot of helpful feedback about them.

Paschal wondered why the stickers need to be reusable, and Jon pointed out that many groups meet in venues owned by others, who might not want permanent signs.

Paschal said this could be useful in a local public library where a monthly dementia café is held. 'I end up somewhere different every time I come out of the toilet!'

Myrtle liked the size of the writing on the signs, especially as her husband's sight becomes more of an issue.

Two ideas had cost implications - Paschal asked if Braille could be included on them, and Peter said, 'Glow-in-the-dark signs would be useful at night, especially for the toilet sign. Perhaps for part of the sign if not possible for thewhole image?'

Everyone agreed that the large signs would be useful in public venues, but not everyone thought they would use them at home.

Jacqueline said they need to look more like something you'd expect to see in someone's home so they wouldn't 'pick people out as different', and Margaret noted that different designs could suit different homes.

People tried taking the signs out of the pack, putting them up, peeling them off and replacing them onto the holding sheet. Margaret found this easy apart from putting the sticker back onto the right sheet.

'Having the name of the sign on the sheet would help to know where to replace it,' she said.

Raksha thought the signs could be useful for a weekend away. Deirdre agreed, 'The toilet sign would be very useful in a hotel room.'

The people with dementia found it more challenging to remove and replace the stickers, particularly having to hold the sheet down while peeling the sign off.

Sticking it back into the pack, Denise said, 'It's quite fiddly, but it's OK if it's not perfectly aligned.'

Although the group thought the high contrast colours made them clear, they preferred more neutral colours for some pictures and said red should be kept for signs that were instructions like 'way out'.

The set of small stickers costs £31.95 without VAT (you wouldn't need to pay VAT if buying them for a person with dementia).  The large signs are being researched further before they become available, and the prices aren't yet known.

As is often the case with specially designed products, people thought the price seemed expensive. Jon assured everyone that our shop's prices are checked regularly against those elsewhere to ensure that they are competitive.

Group members thought the large signs' instruction sheet should be in a larger font, and this will also be fed back to the product's developers.

More from Dementia together magazine: Apr/May 18: