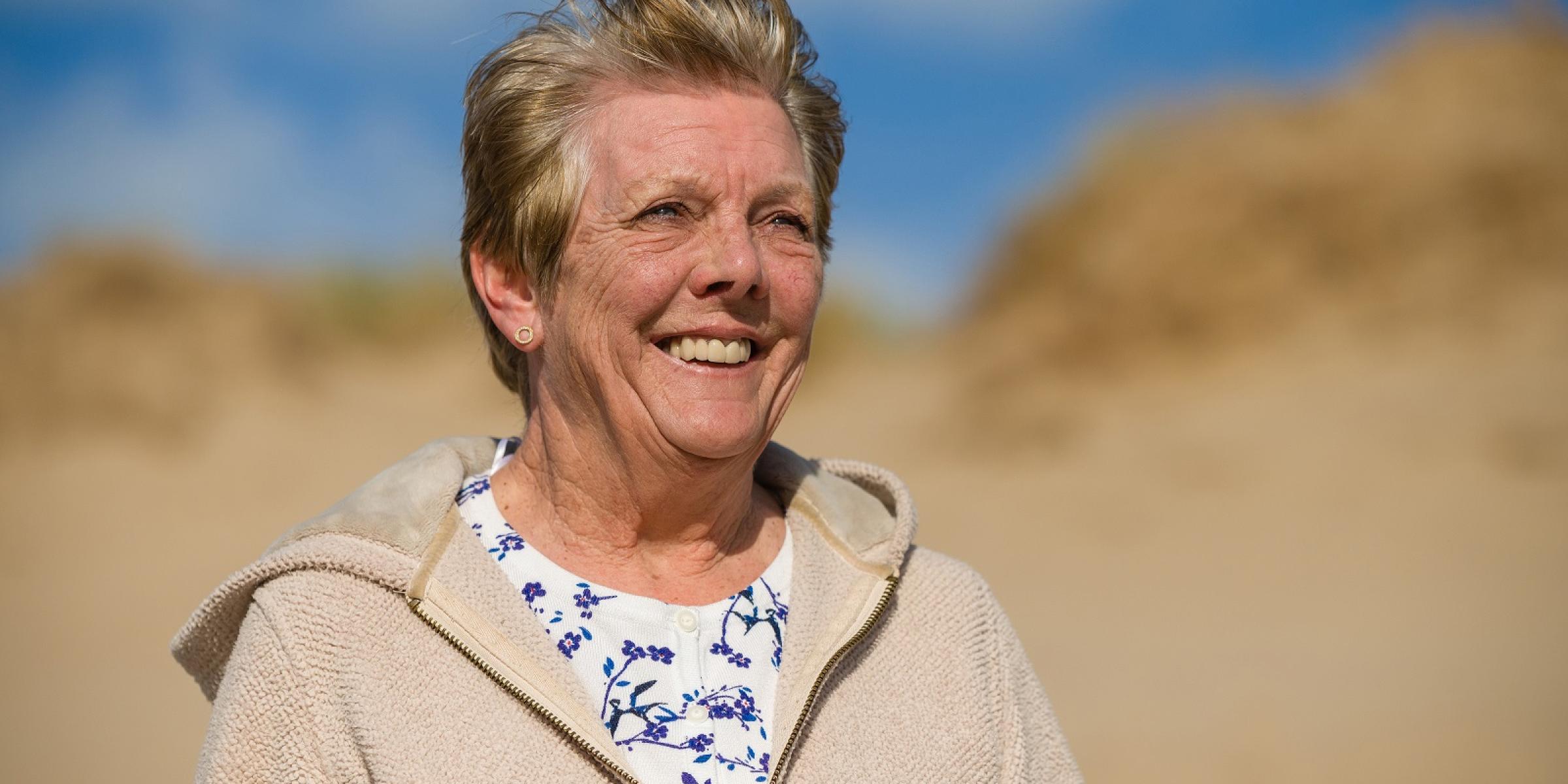 Real stories
Each day as it comes: Staying connected
Dementia together magazine: Apr/May 19

Living in a remote spot, Pam Wood appreciates her continued connections with other people.

Life in an idyllic coastal village has plenty of perks for Pam Wood. The beautiful scenery, nearby beach and friendly locals are among the many reasons she loves Holywell Bay in Newquay, Cornwall, her home for the past four decades.

However, since her dementia diagnosis a few years ago – difficult enough to contend with in itself – Pam has found herself extremely grateful to her daughter and the Society. Their support has helped her to remain connected while living in such a remote spot.

Press the orange play button to hear this story in Pam's own words:

Pam, 76, was born in Cheshire and lived in Crewe, where many in her family worked on the railways. One of her grandfathers was a wheelwright – making and repairing wooden train wheels – while her father was a coppersmith. Her other grandfather was a train driver who once recorded the fastest journey time from London to Glasgow on the Flying Scotsman service.

Pam worked as a legal secretary before running a newsagent with her late husband Arnold. Around 40 years ago, they sold the business and moved to Cornwall with their young daughter Julie, where they opened two more shops.

‘We used to come here twice a year to a holiday home and just fell in love with the area,’ says Pam. ‘So we packed up, came down and I’ve been here ever since.

‘I haven’t got a Cornish accent yet, though I’ve been here long enough to have one!’

Pam has fond memories of working in the shops.

‘It was brilliant – you met the public,’ she says. ‘We had good relationships with everybody.’

Pam describes herself as an outgoing person who always wants to be doing something, whether indoors or out.

‘I like to be on the go all the time. I like walking on the beach and going to a craft club,’ she says. ‘I do knitting, crosswords and tapestry work. I’m into my jigsaws at the moment – it’s a big country scene one.’

This page explains what to expect from a dementia diagnosis, how it might be delivered and what happens afterwards.

Long before her dementia diagnosis, Julie noticed that Pam had begun to repeat herself during conversations.

‘If I said something to her I’d say the same thing a quarter of an hour later,’ says Pam. ‘She would say, “You’ve told me that once,” or, “You told me that yesterday.” I just put it down to my nerves, being on my own, but it started getting worse.’

Pam visited a GP and took memory tests, while a brain scan came back clear. Six months later, with her repetition becoming more regular, she returned to the doctor and was eventually diagnosed with Alzheimer’s disease in mid-2016, around two years after her first appointment.

Julie recalls the news being delivered to her mother in an unsympathetic manner.

‘The doctor just said, “You’ve got Alzheimer’s, bye-bye.” It was very harsh, very blunt. There was no explanation or advice on who I could get in touch with for help,’ she says.

Pam, who had never even heard of dementia, became more self-conscious about potentially making mistakes or repeating herself during a conversation.

‘I think I was embarrassed about it, to be honest,’ she says. ‘If I’d say something to somebody and they'd look at me, I’d think, “Did I say something wrong there?” I tried to hide the embarrassment somehow.’

Pam gave up her driving licence around six years ago after others noticed her driving becoming more erratic.

Meanwhile the only shop within walking distance closed down, and she isn’t keen on using the local bus service, leaving her to rely on Julie for food and supplies.

Pam isn’t fazed by living in an out-of-the-way area, but acknowledges that she would be more isolated without the support of Julie, who lives next door.

‘I had my own independence with going shopping, but giving up driving was the right thing to do,’ she says. ‘I don’t really miss it because I’ve got Julie, her partner Kevin and the boys – but it’s very important that she’s around. I don’t know how I’d cope without her, to be honest.

‘If Julie wasn’t here, then life would be really hard with things like shopping and the mail. I couldn’t cope with the mail  – she takes all that off me. Kevin is a DIY man, he’s brilliant and checks everything for me.’

Pam used to join Julie for the shopping but stopped after it became too much for her.

Julie says, ‘I saw a vague look across Mum’s eyes. The shop was far too big and there were far too many people for her. So I had to take her out of that situation.’

Pam starts waving her arms frantically. ‘You walk in and everybody is like this,’ she says. ‘They're always in a hurry – they’ve got the trolleys and are pushing at you. Everybody’s around you all the time. It’s overpowering.’

Join the thousands of volunteers already taking on dementia

Top of the world

Julie has struggled to get the right support for both Pam and herself from local services, a process that she says is ongoing.

‘You’re completely forgotten about,’ she says. ‘If I didn’t live next to Mum, I don’t know what sort of state she’d be in now.’

The main source of support the family has received has thankfully been a great success. This is Side by Side – the Alzheimer’s Society service that helps people with dementia to keep doing the things they love with the support of a like-minded volunteer.

‘Sue is just good company, all through. We have such a good time and I feel on top of the world afterwards,’ says Pam.

Pam was matched with local volunteer Sue Morey and the two have met weekly for the past year. They’ve become good friends during visits to garden centres, walks along the beach and even a trip to a cider farm.

‘I hate being bored. I’m here on my own and there’s only so much telly you can watch,’ says Pam. ‘It’s just getting out for a couple of hours.

‘Sue is just good company, all through. We get on like a house on fire. We have a good laugh wherever we go, I always look forward to it. We have such a good time and I feel on top of the world afterwards.’

Sue feels that their trips help her as much as Pam.

‘Everyday family life can be stressful and it gives me that two hours of chill – no one else matters,’ she says. ‘I get a lot of enjoyment out of it – it’s just so rewarding and Pam is so appreciative.

‘We’re just so alike, especially in the things we like to do. Someone thought we were sisters last week!’

Pam also keeps herself busy by working for a friend’s cleaning business.

‘I help them clean the holiday homes – it can be three or four times a week in the summer,’ she says. ‘It’s nice to clean it all the way through and think, “That looks really nice.” It gives me a boost because I’m not just sitting in the house vegetating. I love it.

‘My friend gives me a bit of pocket money. It makes me feel good, particularly when he takes me for coffee and cake!’

Pam’s desire to keep active and involved means she wants to continue living in the moment.

‘I’m determined to face up to Alzheimer’s. That’s why I keep carrying on and trying to cope, because I hate sitting in this chair 24/7,’ she says.

‘I don’t sit thinking that in another five years I won’t be able to walk or whatever. That’s not me.

More from Dementia together magazine: Apr/May 19:

Dementia together magazine, Alzheimer's disease
Back to top