Three entries with commendations from our 2019 poetry competition 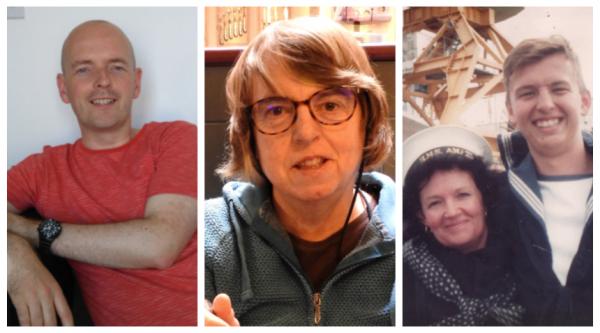 Real stories
We received 120 dementia poems across the three categories – Change, Share and Celebrate. Read three entries that received a special commendation from our judges.
1

Thank you to everyone who submitted their work to our 2019 poetry competition, featured in our magazine Dementia together.

Your dementia poems were judged by our shortlisting panel, which included winners from our 2017 competition.

We're proud to publish the three winning poems below.

She does not brush the crumbs
tenderly
from her father’s suit,
she does not speak
reverently,
in fact,
she offers him a biscuit
and takes one herself.

She ties his shoelaces
quickly, with an eye
on the state of his socks
and does not tread gently
across the dozing room
or hold back the day –
allows the light to break in,
cheerful, uncompromising.

She does not refrain
from telling him
what he has forgotten,
but listens
to every song he sings
and learns the words
so that their voices rise
together.

When I was about seven, my mum and I discovered
the novelty of biting through rice paper and letting

it snowflake on our tongues. It was our exotic secret,
pasted fish-skin thin onto a pulpy, seed-ridged fruit bar.

My nan joined us once and we formed a street coven to
sample these strange, freshly bought treats. Mum and I

ineffectively at the vacuum-shrunk white
cover. Her face peering at their failure.

My delight at being the bearer of a hidden truth gave way
to the bodily buzz of loss. Those life-coarsened fingers that

seemed to have ripped a place in the world for me, were now
diligent but outfoxed; reduced to the cluelessness of childhood.

Her last days, decades later, seemed a slow erosion back
to the earth from which she was shaped. There was a wildness

beneath her tumbleweed hair and feeding, soothing
and tending became dependant on the hands of others.

A lovebeam of a greeting was late to disappear, but eventually
gave way to a frown of alarm, as my shape in the doorway

became unfamiliar to her. Her fingers, stripped of certainty,
became swollen and her gold wedding band began to bite.

Pliers held with surgical care snipped it in two, in
order to relieve its unsustainable pressure. As I looked

at the waxy white circle of newly uncovered skin where
the ring had been, I felt rice paper sadness once more.

Each word remembered
perfect chord, breathing
out memories of evenings
when it was warm and
she in summer dress
wished she was Bobby's girl

We play the song, see
sparks that set a
Spanish bar alight, as
she with arms outstretched
to grasp the past
wished she was Bobby's girl

For more poetry and other stories from people affected by dementia, subscribe to Dementia together magazine.

Dementia together magazine, Poems and Poetry
Back to top

So sad that I knew nothing about this competition.
If it is an annual event, it needs to be advertised more widely to the public at large.
congratulations to all the winners!

Not properly advertised. Where is this competition held, and which months are covered for 2019? . Will 2020 be for poems written from October 2019. May entries be already published poems?. Pity, I have some published already and many new ones on Dementia.

Hi there, thank you for your interest in the poetry competition!

Our magazine, Dementia together, holds a poetry competition every two years and we announce it to our readers in the spring, in the print magazine and online. The magazine is for everyone in the dementia movement and anyone affected by the condition – subscribe to get your copy at alzheimers.org.uk/subscribe (we post to the UK, Republic of Ireland, Isle of Man and Channel Islands) and read it online at alzheimers.org.uk/magazine

Although the next competition won't be until 2021, we do sometimes feature poetry on our blog and social media. If that's something you're interested in, please get in touch [email protected]