A trip to the cinema is one of life’s great pleasures, but it's not always a supportive environment for people living with dementia- here's why. 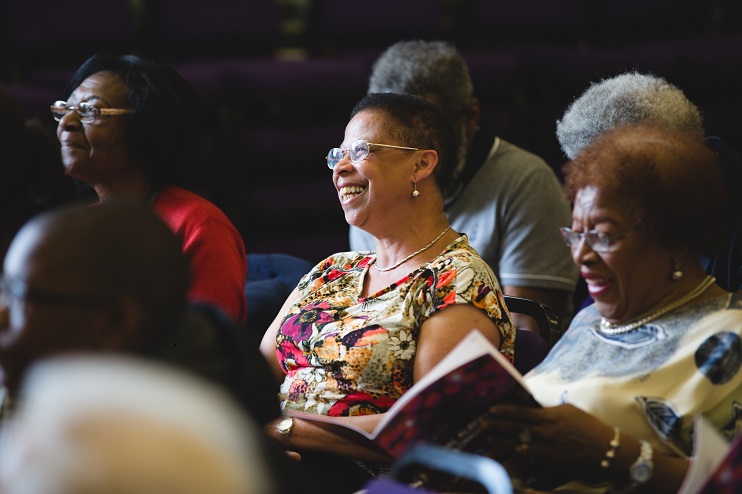 Dementia-friendly screenings: A guide for cinemas

Cinemas have an important part to play in tackling the social and economic impact of dementia, by allowing people living with dementia to continue to see films.

Cinemas don’t always make accessible or supportive environments for people affected by dementia. According to our recent survey, 69% of people with dementia said that the main reason they stop going out is a lack of confidence. And with more than 850,000 people in the UK currently living with the condition, it’s vital we do everything we can to build a society that’s inclusive for all. That’s why a growing number of cinemas across the UK are now offering dementia-friendly film screenings.

Put simply, it’s about creating social spaces that are accessible, welcoming and fun, so that people with dementia don’t have to miss out on the magic of cinema. Our new guide will support cinemas to become more accessible. But have you ever wondered what makes a screening dementia friendly? Here are five small adjustments that can make a massive difference.

Knowing your audience is crucial for any film programmer, and the same goes for dementia-friendly film screenings.  While there are no hard rules for what should or shouldn’t be shown, certain types of films typically go down better than others. Musicals, for example, are particularly engaging for people with dementia. Evidence suggests that the brain processes music differently to other functions, so ‘Singing in the Rain’ can still be enjoyed long after other activities become more difficult.

Nostalgic old classics are another great choice, giving audiences the chance to connect with memories and reminisce. Newer films can work as well, but it’s best to avoid anything too long or with a complex narrative. Audience feedback is very important for this. Some cinemas may find they have a lot of people with young-onset dementia, for example, who may not be so engaged in ‘old’ films.

A dementia-friendly cinema should provide a welcoming space for people living with dementia, starting with the staff. An easy way for cinema workers to get to grips with the challenges is by becoming Dementia Friends. Dementia Friends is a social action movement which aims to increase understanding of dementia. It is a free, one hour session for staff to attend in person or they can watch the shorter online videos.

These sessions will enable cinema staff to feel fully connected to the screenings and empowered to support customers with dementia. Staff presence is also really important. Having lots of people on hand throughout the event—particularly as people arrive—can be both supportive and reassuring for the audience.

As well as having staff in place to answer questions, clear signage can help people with dementia get around the cinema with confidence. Signs for toilets, car parks, ticket points, entrances and exits are particularly important.

Our guide recommends cinemas use signs with lower case lettering, with a clear contrast between the text and the background. Large, simple fonts work best, and it’s also best practice to stick the signs on the doors they actually refer to. If in any doubt, cinemas can print out our free dementia-friendly signage ahead of the event.

A pitch black room can be intimidating for somebody living with dementia, making it more difficult to identify exits and toilet signs. We recommend cinemas opt for low lighting during dementia-friendly screenings, using lamps and up-lighters to create a softer, more relaxed feel.

Sound also needs careful consideration. While raising the volume too high can be stressful and difficult to process, many older people with dementia may also be hard of hearing. That’s why we strongly encourage that cinemas ask their audience for feedback during and after the screenings to find a good balance. Films with loud bangs or sudden noises may also be best avoided.

5. Listening to people living with dementia

We created our guide to dementia-friendly film screenings to give cinemas the tools and support they need. But nothing here is more valuable than the experiences of people living with dementia. So if you’re somebody living with dementia, or care for a person who is, don’t be shy about giving feedback on your next cinema trip.

Just as the small adjustments above can make a meaningful difference, your suggestion could help create a better cinema experience for everyone.

We’ve highlighted some of the key features of dementia-friendly film screenings, but you can find a lot more useful information in our new guide.

Food for thought.
Lighting was not something I had thought about. Darkness is often intimidating for our residents. How do I find cinemas providing this service?

Hi Cynthia, thanks for getting in touch. The best thing to do is contact your local Alzheimer’s Society service – they can then advise on what activities, including dementia-friendly screenings, are in your area. You can find the details of your local office here: http://bit.ly/2zyFZrd Alternatively, you could visit the website of your local cinema directly to see what relaxed screenings they have. Often cinemas are happy to provide further support or adaptions if requested, so it’s definitely worth getting in touch to find out more. We hope this helps! Thanks and all the best.

I struggled to understand the actions of the Physios who attended to my wife during a recent period of hospitalisation.My wife was diagnosed with dementia in Alzheimer's in 2012 and is in the advanced stages.She is also Diabetic Type 2.Her BM count was 31(very high)and her sodium levels were very high upon admission. The medical team,doctors and nurses,whilst being under great pressure, were brilliant in treating,caring, and resolving the diabetic problems.
After being bedridden for two weeks and having eating problems I was called to the Hospital whilst the Physios attended.Three young athletic,white coated, female physios stood at the side of her bed.Naturally my wife failed to respond to their requests for her to "get up".They assessed her as Immobile and based her Discharge requirements on this assessment.I advised the.O.T.people who were responsible for discharge that before admission to hospital she was able to climb,with guidance stairs at home,and slept upstairs in an adapted for purpose bedroom.The physios were later dispatched to my wife's bedside to "re-assess" her mobility.By this time my wife was capable of walking the corridors to the wards and had regained some of her former strength.The "physios",under time pressure,then walked my wife along the corridor to a gymnasium,well lit,and equipped.They took her to a set of "three steps up and three steps down".My wife froze and was unable to move when instructed to walk up the three steps.With this the physios assessed that she was unable to negotiate stairs and would have to have a hospital bed downstairs and lowered to the lowest level with crash mats.The option in making a Home assessment was dismissed "as we don't do that,all assessments are made here"!Other dementia patients received the"same treatment".I completed the Hospital Questionnaire praising the high level of care provided by Doctors and Nurses(many Agency) and made the above observations of the Physios modus operandi. I have not received any response after two months now.There are,of course,other very important issues concerning the care and treatment in Hospital of dementia patients.

Hi Patrick, thank you for your comment. It sounds like a very upsetting experience, and unfortunately not that rare. It may be worthwhile to write to the Health and Care Professions Council in order to make a formal complaint regarding this. You can find out how to do this here: http://bit.ly/2gwW8Jk

If you would like any further dementia information or advice, please don't hesitate to call our National Helpline team on 0300 222 11 22.

Thanks again, and all the best.

I love this article and would love to feature it on my blog at ALFlist.com! This is a GREAT idea and really should be more theaters/ entertainment facilities that are dementia friendly!

My twin-sister, has been suffering from brain tumour since 2011, and now - as a consequence - also Fronto-temporal Dementia, which affects people still in working age. In my family no-one has been suffering from dementia before. I am looking full-time after her. In August is our Birthday. She loves opera and Pavarotti. This morning, while watching BBC1 Breakfast, I learnt about a film being out on Monday about Pavarotti. I know my sister, who is very sensitive to noises, would love to see it. We used to go to the pictures and enjoy a good film together. Not now. It has been ages since last time we watched one: I believe it must be 'The devil wears Prada'. Should I approach the Manager @ Odeon in Southend, explain about my sister's illness, and ask if s/he would mind a person suffering from dementia watching a film, and also I would like to find out about cinema's concessions?
Kind regards,
Elisa