Real stories
Amy’s story: ‘I hope our love for each other is the one thing Grandad never forgets’
Blog

Amy and her grandfather Ron share an incredible bond. Once the person caring for Amy, now her Grandad is being cared for. Here's Amy's heartwarming tribute to her biggest role model. 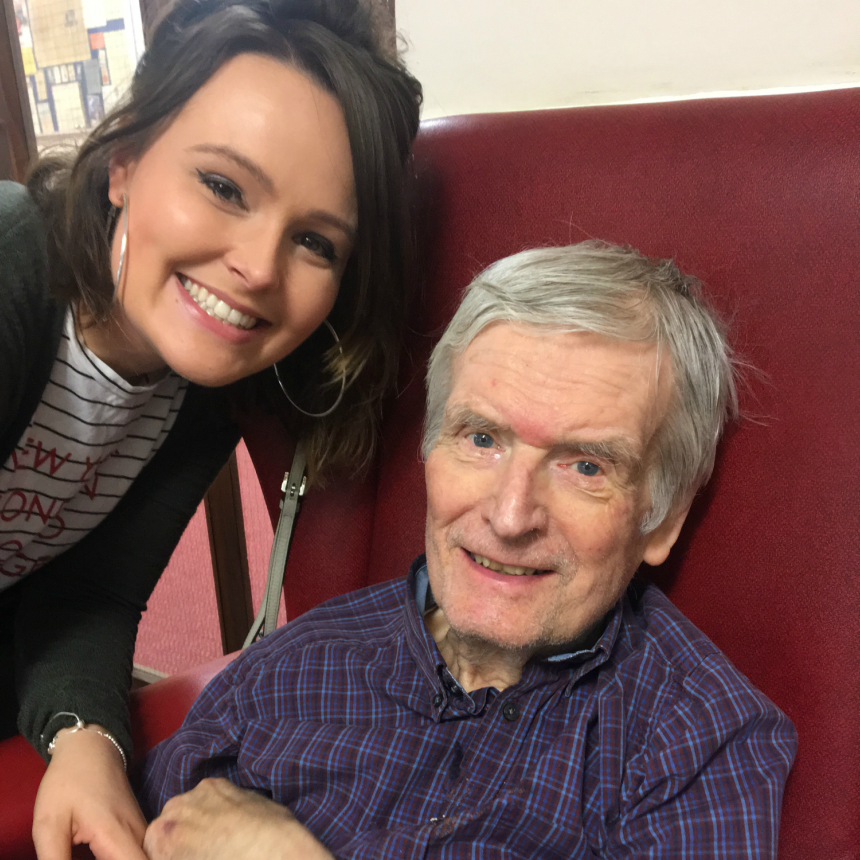 My Grandad, Ron Chancellor, was born in 1933 in Guildford, Surrey. He’s had quite an interesting but challenging life.

Following the death of his mother during a siblings’ birth, Grandad was put in an orphanage with his sister, Sheila, by their father.

During the war some years later, my Grandad and Sheila were brought to Brierley Hill in the West Midlands. Along with many other children, they were taken to a church where local residents came to collect the evacuees to look after.

Grandad’s sister was taken in by a lovely couple who were unable to have children of their own. Not wanting to be apart from her big brother ‘Ronnie’, Sheila returned with the couple to fetch him.

After the war ended, Grandad never returned to Guildford. He had finally found the loving parents he deserved. He was adopted by the lovely couple, aged 11.

Despite having found a loving home, Grandad was always keen to find out more about his biological family.

Around 15 years ago, he had a phone call from a sister he never knew he had. He had always been told when his mother died in childbirth, the baby also passed away. This was not true. Almost 70 years later, Grandad and Sheila met their little sister and the three have kept in touch ever since. 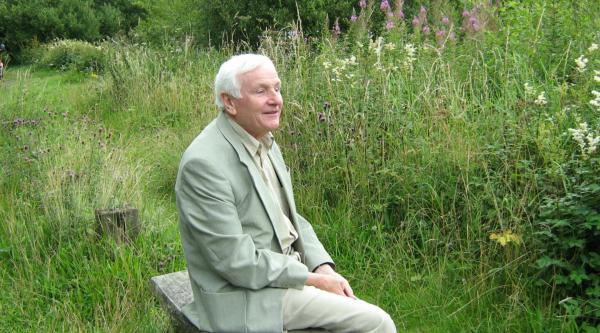 Real stories
Sylvie is a 16 year old student living in Scotland. She wrote a heartfelt essay, titled Forget Me Not, about her granddad's earliest signs of dementia. We have posted Sylvie's essay unedited and exactly as she sent it to us.
45

At 60 years old, Grandad retired. That same year, I was born. From 6 months old when my mom went back to work, Grandad looked after me and we spent every day together.

Throughout my whole life, my Grandad has been my role model and a father figure. We have always been so close, even before my Dad passed away when I was 15. Grandad has brought me up like a daughter and we have the most incredible bond despite his diagnosis of vascular dementia five years ago.

Being his only grandchild, Grandad definitely gave me all the love he didn’t have as a child. He knew what it was like to grow up not feeling loved. He would play with my toys with me, take me on holidays and really was my best friend.

All of my earliest memories are of Grandad and they are memories I will cherish forever.

Even as I have grown up, Grandad has been a part of all of the important milestones. He taught me how to drive and was there when I graduated. He really has done all of the things my Dad would have done.

We would have always been close but I know Grandad stepping up to be my father figure has made us even closer.

Our personalities are very similar and as I get older I can see I am even more like him. We are both caring and family-orientated.

A switch in responsibilities 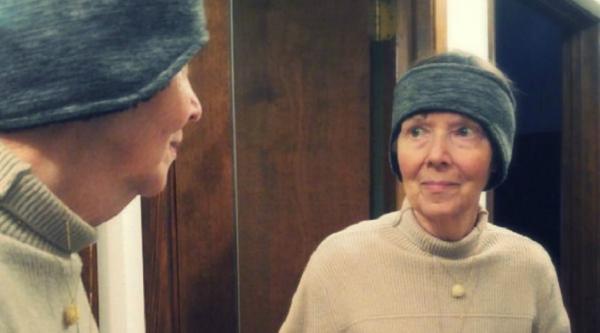 Grandad has looked after me since I was a young girl. I have taken care of him during recent years. Our roles have definitely reversed.

Now Grandad is in a care home the things we can do are limited. I visit him every weekend and he enjoys watching football.

Grandad is an Aston Villa fan so we watch them on TV and watch his favourite TV programmes.

He enjoys looking at old photos on my phone during visits. He flicks through photos of us all from years ago and we talk about the memories. This is when I see parts of my ‘old’ Grandad coming through, as we reminisce on old times and he smiles and I know he does remember.

I always make sure I take chocolate with me when I visit - he has a real sweet tooth! He will sit and hold my hand and tell me how much he loves me. I know I am so lucky he still knows me and is able to communicate with me. When I leave, the staff say he will shout for Amy. I hope our love for each other is the one thing he never forgets, because I know I never will.

My Grandad had a tough start to his life and has certainly has had a tough end. But I am so proud of him and thankful for all he has done for me.

This disease may be heart-breaking, but I am so grateful I can tell his story of the wonderful man he was, and the incredible life he had, now that he no longer can.

Relationships and Family, Vascular dementia
Back to top

Oh my goodness, this is the exact same as me. My own dad passed away when I was 3. Grandad took the role as a dad and now he is Simular to your grandad. I am so grateful that he recognises me and although he doesn't know my name he knows who I am and that smile on his face when I walk through the door says it all!
It's such an awful disease 😭

Thank you for sharing Amy. I used to work in the home your lovely grandad is in. I had the honour to help keep him motivated. I have fond memories and still think of him. Pleased he is doing well. Lots of love to you all x

Thank you Tracey :) We are so thankful to people like you who have taken care of him. And I’m so happy you’ve been able to see what a lovely man he is despite the dementia, it means so much x

Thank you Tracey. We are so thankful to people like you who have taken care of him and I’m so glad you’ve been able to see past the dementia and see what a lovely man he is, it means so much x

Thank you Amy for sharing such a beautiful story.
I have printed your story to share with staff and relatives of the home I manage to help them see how important it is to really know someone, so we can give them the love and care they need, but also to see that person as a whole human being.
You are such a special person and the bond between you and your grandad is beautiful to see xx
Thank you.

Thank you so much for your lovely comment. I am so glad you liked the story and have used it at your home. I hope it does help other people and I know my Grandad would love the fact people are enjoying reading about his life :)

Oh Amy ! What a beautiful story !! Thank you for sharing ! I can do relate to this with my Nan !!! She is my hero , also has vascular dementia! It so nice and humbling to give a little back to them knowing and never forgetting what they have done for us over the years ! Huge respect to you and big hugs to you and your grandad xx

It’s so lovely you have the same relationship with your Nan like I do my Grandad! It’s so hard seeing someone you love so much suffer like this, but so important to remember all the good times! xx

Thank you for this very moving story. It is similar to someone I know with Alzheimer's Disease who is also in a Care Home now. It was a Brother he "found" in his 70's who had been adopted & never told about!
Its great if people can look after their relatives in their own home & avoid the extra cost of a Care Home. If the health needs are complex & help is required the NHS will pay all the required costs if you can get "Continuing Healthcare" Benefits. Its very difficult to get so having been successful myself I launched a website to help other people. Visit https://continuinghealthcare.wordpress.com/
for further information. Best wishes Peter Garside

Very moving story !! My Sister has been diagnosed at the age of 61 years of age and l feel that l need to learn more about this unfair illness to some body who was so full of life and and looking forward to retirement with her newly born Grandson !! . The illness with her seems to be rapid and l feel that very hard for myself to accept. Thankyou for the E mails .

I know what you mean. My husband was diagnosed with Alzheimer’s last year this is my first step to accepting. Our anniversary is coming going to be 36year of marriage. I cry all the time he’s going through a lot. I feel so horrible because I cannot help him I don’t know how to make him feel better.

I am a carer for my partner. She is now in the final stage of the disease. As it is slow process it makes it easier to cope. A word of advice. try not to get into an argument with your husband because you will not win it. Here in Cambridge we have The Dementure Carers Support Service. They take us to the seaside once a year. Also we have three parties a year.