Hear from Gordon, one of our Research Network members, and find out whether volunteering is right for you. 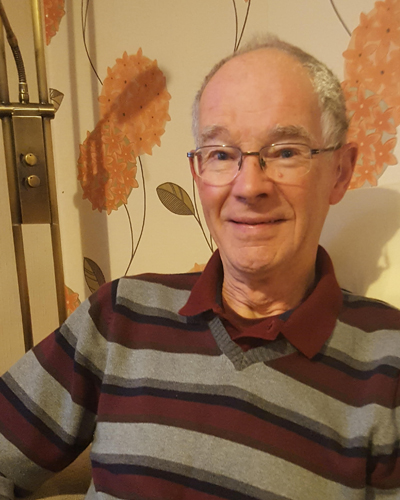 I joined the research network 16 years ago following my wife's diagnosis of early onset Alzheimer's disease. It was around the time that my wife was involved in a drug trial and we were asked by the researcher if we would like to be involved in another project, which was being funded by the Alzheimer's Society. The Research Network had only recently been set up at the time and the researcher wanted to find his own monitors for the project. I joined the Network to find out what this monitoring was all about!

Being involved in the Network has fitted well around my other commitments as the lay reviews are always done at home. By the time I became more involved in monitoring, I had already taken early retirement, so it fitted in well.

Over the years, I have been involved in a number of different activities, including lay reviewing, monitoring projects, sitting on advisory panels and interviewing grant applicants. I have also recently been involved in assisting researchers with their grant applications. It is very satisfying to be involved at the early stage, helping prepare the lay summaries, discussing how people could be involved, and providing constructive feedback about how to focus the research. This has been very rewarding, particularly when the application is successful!

I have spoken at many events across Northern Ireland about the Network and the importance of involvement in research. These have included the Society's Legacy events in Northern Ireland. I speak to people here who are interested in leaving money to the Society in their wills and try to give them some insight into the crucial role research plays in the battle to defeat the scourge of dementia.

My major highlight has been being involved as a monitor in one of the Network's earliest drug rediscovery projects, the ELAD study of the diabetes drug Liraglutide. It has been a long running project first in Ireland and now in London and I have been able to follow it from testing in a mouse model to now undergoing a major clinical trial. It has been a privilage following the research from the start, hopefully through to a positive conclusion in 2019.

Benefits of being a Volunteer

From becoming a Network Volunteer, I have had the opportunity to be involved more widely in other dementia and healthcare engagements in Northern Ireland, where I am a member of the NI Clinical Management Group for dementia and a member of PIER (Personal Involvement Enhancing Research) within the HSC R&D Division.

'Major advances have been made in understanding the processes causing dementia, which is very positive. There is also an increasing level of involvement of the scientific community into the issues of care and wellbeing.'

For me, being involved in the Network has been a very positive experience, seeing how hard people are working to improve the lives of people experiencing dementia. The responsibility of reviewing can seem daunting, but it does get easier. I try to keep in mind that although the applicants may imply that their proposal will unlock the mystery of Alzheimer's Disease, this is unlikely to be the case! I try not to be too disappointed if something promising fails to deliver. All research findings are informative, even when not producing the answers which were hoped for. Major advances have been made in understanding the processes causing dementia, which is very positive.

There is also an increasing level of involvement of the scientific community into the issues of care and wellbeing. My 16 years with the Network has been a journey I have been privileged to travel.