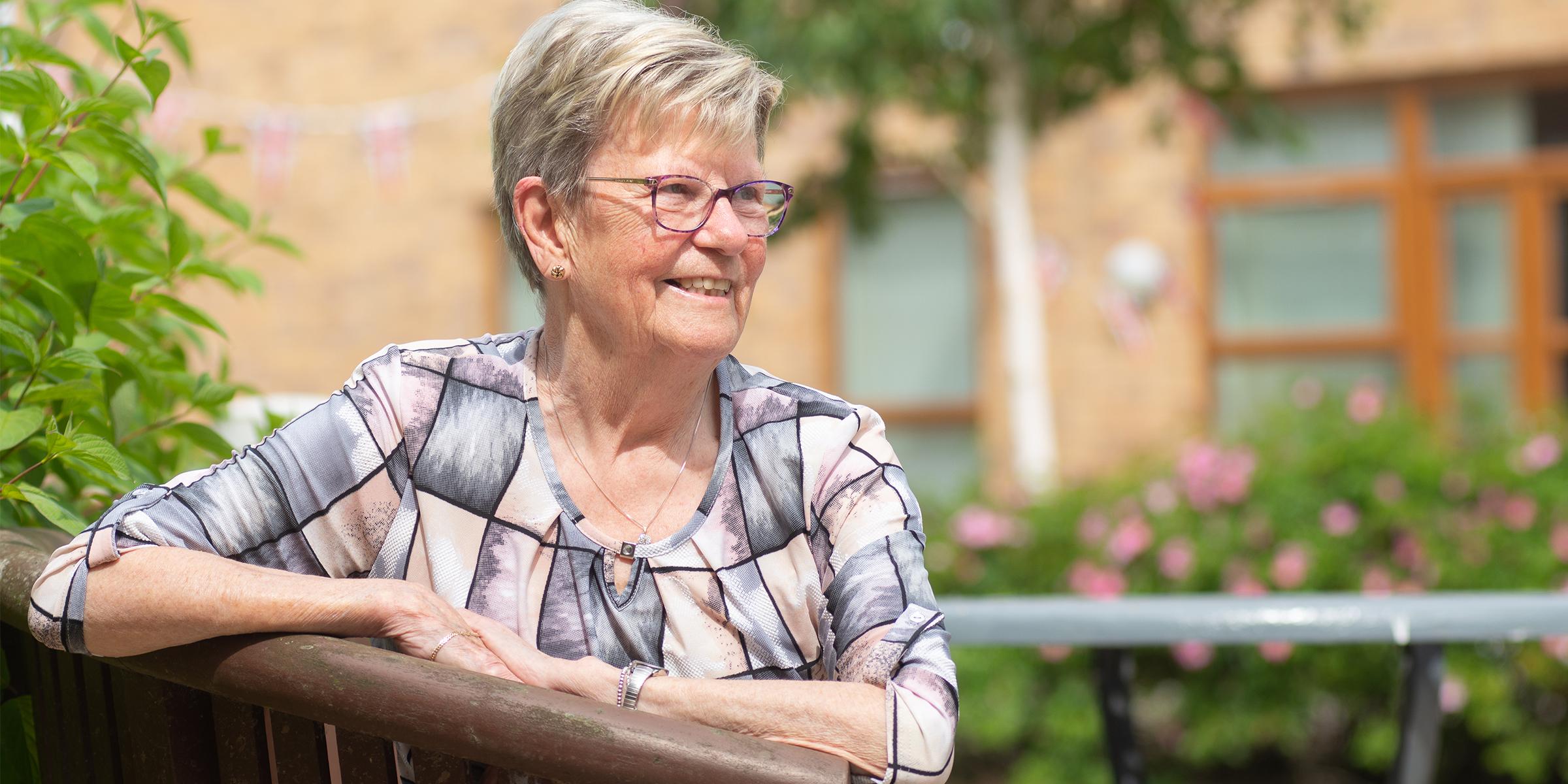 After someone receives a dementia diagnosis, or as their condition progresses, they may need or wish to move to an alternative home.

For many with more advanced dementia, a care home or nursing home can be the most appropriate setting. But for Kath Sutherland, who was only diagnosed late last year, an apartment within a care village has proved to be the perfect place.

‘I didn’t want to be at home by myself – I would have been too isolated,’ says 82-year old Kath, who is from Liverpool but now lives in Wigan.

‘I think I settled in here straight away really. It’s all so lovely, so friendly, and there’s so much going on.’

Moving out of home and into a care setting is obviously a big transition for anyone, but Kath has embraced her new surroundings.

Kath grew up as one of four siblings in a terraced house in Liverpool.

‘I always just enjoyed it there,’ she says. ‘It was an in-between area – it wasn’t posh, but it wasn’t rough!’

After leaving school, Kath went into bookkeeping, before taking on an accountancy role in the same office. After starting a family with her husband Keith, who worked in printing, she switched to various jobs including shop work and cleaning.

Kath had met Keith at a ‘dance place’ in Liverpool, which she thinks was either the Grafton Ballroom or Liverpool Irish Centre. They were married in 1970 and have two children.

‘I loved having children,’ she says. ‘And when you get older, you realise how lucky you are to have children who can help you out.’

Not long after their wedding, Kath and Keith moved to Australia.

‘It was the £10 scheme, where they paid for your return air fare as long as you stayed for two years,’ explains Kath. ‘I’d always enjoyed going there on holiday, and they were asking for printers to go over, so Keith had a job to go to.

‘It was lovely weather, beaches – just brilliant. I loved it out there! We crossed over the desert by train. The car was on the back of the train and the train took you so far, then you had to drive.

‘I’d rather have stayed over there, but Keith was homesick and desperate to come back after the two years, so I agreed. We didn’t ever go back – without the scheme we couldn’t afford it.’

Can genes cause dementia?

Around 1 in 4 people aged 55 years and over has a close birth relative with dementia. Find out what part genes play in dementia and how genetics can affect the risk of developing the condition.
Read more

Kath was diagnosed with dementia in December 2021, after she moved to Belong Wigan, a care village in Greater Manchester.

‘I remember when I was younger, someone saying, “You’ve got a memory like Nellie the Elephant – you never forget anything.”

‘But last year, when I was getting phone calls, I could never remember after putting the phone down. “What did they say then?”

‘It didn’t concern me at first. It was my children who noticed it more than me.

‘I then went through a spell where I wasn’t well – water infection after water infection. At first, they were saying it was because of the water infections that I was getting confused. Then my husband was diagnosed with dementia and after that my memory just went downhill.’

Kath says she’s benefitted from dementia medication. Her mum and sisters all had dementia, as does Kath’s sister now too.

‘I never really thought I’d get dementia, but I also wasn’t surprised when it happened, as it’s well within my Mum’s family,’ says Kath. ‘Because of that, I accepted it more.

‘I’ve always got paper and pen next to me for phone calls. But I do forget where I put things at times!

‘I tend to laugh dementia off, as it’s just part of life to me. You’ve just got to accept whatever happens.’

Care homes: When is the right time and who decides?

Advice and practical tips for carers on when is the right time for a person to be moved to a care home.

It was actually Keith who first lived at Belong Wigan, while Kath stayed with her daughter for around six months before also making the move. The couple were both at Belong for a while before Keith moved out, and he’s now waiting to go into a nursing home in Liverpool, closer to the family.

Kath lives in one of the care village’s independent living apartments, where she has her own space but can also access staff support, as well as facilities such as a bistro, hair salon and gym.

She explains that moving out of the family home was in her best interests.

‘It was too big a house for me to stay in, with three gardens to look after, which I couldn’t have done,’ she says.

‘I used to go to a pensioner’s club, but that closed down. I’d just have been sitting at home, looking at four walls.’

Kath is now thriving at the care village.

‘It’s great here, I love it!’ she says. ‘The atmosphere, all the activities that go on, the friends I’ve made. They pulled me in as soon as I arrived. One of them said, “Come to see us, cock!” And that was it.

‘I did work in a care home at one time – possibly that’s helped me as well.’

Kath regularly gets involved in arts, dance and socials.

‘There’s always something on most days, I’ll have a go,’ she says.

‘It’s brought me out of myself more. I was always shy, but I’m a bit more confident now, I think.’

Kath is visited by her son, daughter and grandchildren every weekend, while she also appreciates the support and assistance on offer from the village’s staff.

‘I have carers coming into me every morning, that give me my medication, because my son noticed I was trying to take them twice!’ she says.

‘Someone cleans the place while I’m in the shower, and the reception calls me every morning to check you’re alright and tell you what’s for lunch.

‘I know there’s always help if I need it. I can just pick up the phone and call, or press my pendant.’

Kath is very happy with her decision to move home, and believes that a similar switch could help others as well.

‘Someone I know, who also has dementia, was adamant that they wouldn’t go into a care home “with the TV on all day”. That was their vision of it,’ she says. ‘But they’ve just deteriorated, sitting by the window, watching who goes past. I think their life’s terrible really.’

Kath hopes that sharing her positive experience of moving to a care setting might benefit other people with dementia.

‘If my story is going to help people, that’s fine,’ she says. ‘I think that the likes of this place would help anybody.’

And as she continues to enjoy her new home, Kath is very much focused on the present, rather than spending too much time thinking about the future.

‘I’m that type – whatever happens, happens. What’s meant to be, will be,’ she says. ‘At the moment, I’m quite happy with life.’

£58 could provide a Dementia Voice session for people with dementia to influence our and others’ work.