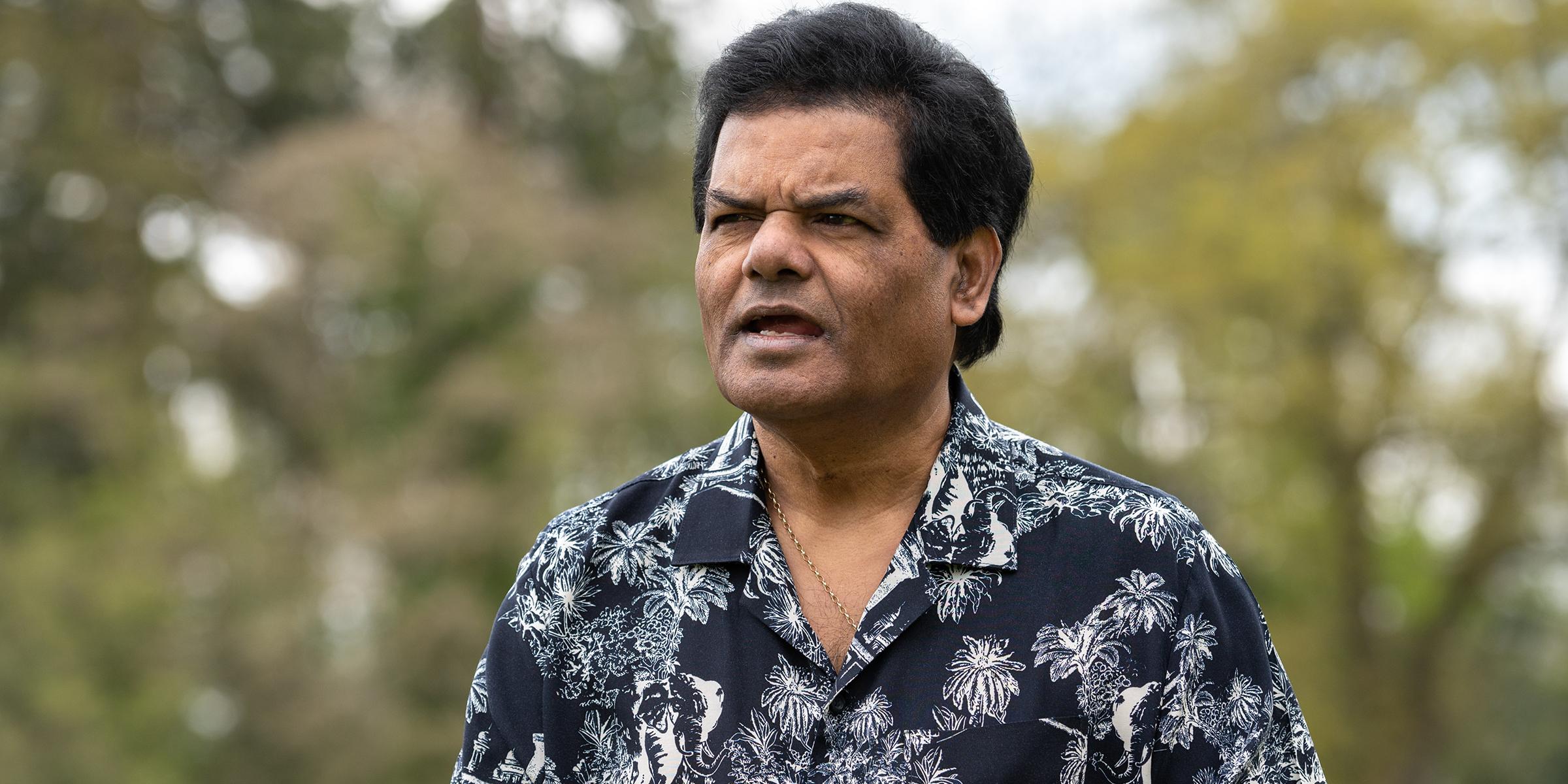 Real stories
From the heart: We all need more empathy and understanding
Dementia together magazine: June/July 21

After a life spent supporting others, France Savarimuthu now faces many health challenges of his own.

Reflecting on his long career as a nurse helping unwell and vulnerable people, one moment in particular stands out for France Savarimuthu.

‘I was working a night shift supporting a patient with learning disabilities who had slipped in the hospital shower and become paralysed from the neck down. I asked for extra staff to help turn him, but was refused and told there was nothing wrong with him. I felt so sorry for this man,’ he says.

‘The next morning a director wanted me to change my report, but I refused, because it was the truth. I don’t like any injustice.’

This attitude remains core to France, who lives with dementia and wants people with the condition to be treated with the respect and dignity they deserve.

France lives in Newport, south Wales, but grew up in Mauritius, an island country in the Indian Ocean. He was interested in politics as a teenager, and in his early 20s was elected chairman of his village council, the youngest person in Mauritius to hold such a position.

‘The first time I voted, I voted for myself!’ says France, who also recalls meeting Seewoosagur Ramgoolam, the first Prime Minister of Mauritius.

France enjoyed singing and playing the harmonium, and used to perform at weddings.

‘I spoke French and English, but my singing teacher said that I had to learn Hindi, to put the correct feeling into the songs,’ he says. ‘I learned faster because I had a purpose, and my singing got better.’

France worked as a teacher and then a pay clerk before leaving Mauritius for Scotland, age 23, having been offered a job as a nurse at a Glasgow hospital. He went on to medical support roles at Glasgow Airport, British Steel, BP and the Govan shipyard.

He later moved to Newport and oversaw a hostel that prepared people with learning disabilities to return to their communities.

Understanding denial and lack of insight

When a person is diagnosed with dementia they may not understand or accept their diagnosis. This may be because the person is in denial, or because they have what is known as ‘lack of insight’.

France has a diagnosis of dementia with Parkinsonism. Parkinsonism is a term that covers several conditions, including Parkinson’s disease, with similar symptoms such as slow movement, rigidity and problems with walking.

‘My writing went first. That was the first sign of Parkinsonism,’ says France. ‘Then one day I took a walk and my legs were giving way. I had to be in a wheelchair.

‘When I got the dementia diagnosis, I didn’t want to know about it – I was in denial.’

France, who has run four marathons in his life, says he has good and bad days. But he feels his physical state is getting worse overall, including sometimes struggling to walk.

Helen notes that his memory sometimes isn’t good and that he can be up and down in the night. France can also lack awareness of what’s around him when out and about, and he once needed surgery after being knocked down by a car.

France has bipolar disorder, diabetes and multiple system atrophy, a rare condition that can affect balance, movement and basic functions such as breathing, digestion and bladder control. He was also in a coma with pneumonia for a week and returned home unable to walk, talk or feed himself.

‘I thought I was dying at that time,’ says France, who received support from external carers for three years.

France currently takes 22 tablets a day and says medication ‘brought me back to life’. He’s also extremely grateful to Helen, not only for her support with his health conditions, but also for fighting his corner with healthcare professionals.

France was only diagnosed with dementia after a psychiatrist assessed him over a few weeks.

Previously, some healthcare professionals had doubted he had dementia, because he didn’t come across in a certain way in conversation and was able to complete the tasks they set him.

France admits that he was able to mask his dementia during some appointments.

‘I knew what the medical people were going to ask, so I could hide it,’ he says. ‘But there’s no point doing that, you have to accept it and be treated.’

France loves spending time in the garden and says his current quality of life ‘isn’t too bad’, though less exercise during the pandemic has led to him losing strength in his legs.

‘We were self-isolating for five or six months – it feels like you’re in prison,’ he says. ‘I followed politics, read my newspapers and listened to music. It was OK but it wasn’t normal.’

France and Helen found it particularly frustrating to be apart from their young granddaughter, who they recently saw for the first time in nearly a year.

‘She’s our little darling, lovely she was,’ says France. ‘It was joy.’

France and Helen were also both pleased to have their second COVID vaccination.

‘I would advise people to have the vaccine. It’s better to have it than not,’ says France, who remains cautious.

‘Some people are still not wearing masks and don’t care, but we’re taking care of ourselves and making sure no one else gets it, because it’s not over yet,’ he says.

France and Helen have received valuable support from Alzheimer’s Society, including help dealing with a housing association and getting benefits. France also enjoys his weekly ‘chat and a laugh’ with Barry, a volunteer who met up with him in person before lockdown.

‘All I have is praise for Alzheimer’s Society – it’s coming from my heart,’ says France.

France and Helen are also involved with Dementia Voice, where people affected by dementia use their personal experiences to help shape what the Society and other organisations do.

They have spoken to newly qualified doctors about what it’s like to live with dementia and how people with the condition should be treated.

‘It’s rewarding – I see people taking notes,’ says France, who has also given talks to the Welsh Ambulance Service.

A few years ago, France and Helen shared their experiences with a group of Members of the Senedd holding an inquiry into hospital care in Wales. This included a story about a nurse who angered France by not supporting him in a person-centred way.

However, the couple also underline the positive experiences they’ve had with healthcare professionals.

France hopes that sharing his story will help change people’s misconceptions and attitudes about dementia.

He is also keen to underline the importance of not making assumptions about people.

‘Sometimes I go to a shop in my wheelchair and people talk to my wife and ignore me,’ he says. ‘Or sometimes people see my colour and assume I can’t speak English.’

For France, it all comes back to empathy and understanding.

‘I always used to think, if I was in one of my patient’s shoes, how would I feel?’ he says. ‘People with learning disabilities are human beings with feelings, don’t treat them as stupid. It’s exactly the same with people with dementia.’

You can ensure that more people with dementia receive the same support and opportunities as France.

More from Dementia together magazine: June/July 21:

Rarer causes, Wales
Back to top

May you always be blessed by your family and true friends. I will try and keep you in my thoughts.

Your courage and fortitude, as well as your still caring attitude towards others who need help, is moving and gives me the certainty that everyone including myself whose wife at age 94 is in a care home, can be inspired by you and provide the psychological care and support that she needs. Thank you, France, for the inspiration that you are and i hope you and your wife will continue to inspire others.

God bless you dear France and Helen. I admire your honesty and bravery for sharing your experiences, especially to help others. It is a truly wicked and nasty disease you have, but you have accepted it and appear to be coping very well.

I work with the elderly, and have seen too many people affected by dementia and it really is the worst thing, in so many ways.

Keep on fighting the fight France. You are an inspiration! And, as the other message read...keep the faith. Jesus loves you.

Dear France i am very sorry you have dementia i am vbery understanding of this more then most people.
i hope you get this message and please have faith.