From the August/September 2016 issue of our magazine, meet Abdus Shahid, a business and family man who retains a strong identity.

Despite being unable to access all of his previous wide-ranging knowledge, Abdus Shahid remains sure of his achievements. Gareth Bracken meets a business and family man who retains a strong identity. 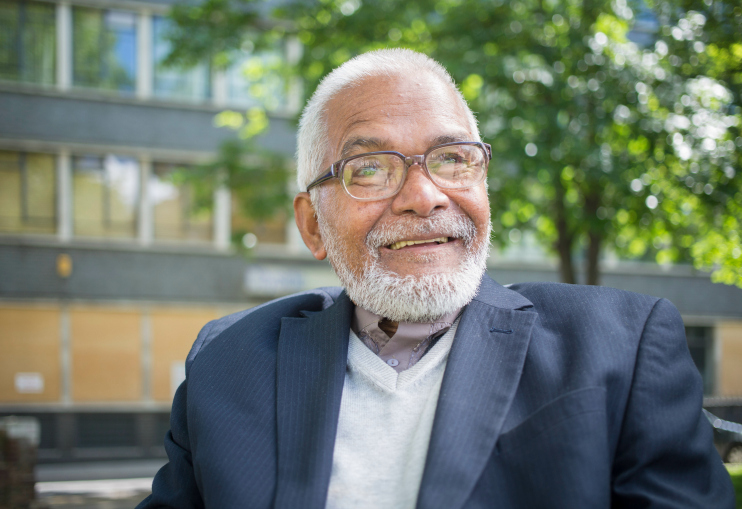 Although unseasonable weather has scuppered our plans to visit Abdus Shahid's favourite east London park, he is in good spirits as we settle in a nearby library instead.

Abdus was diagnosed with Parkinson's disease dementia in 2013. He is one of the regulars at an Alzheimer's Society dementia café called Monday Memory Sitting, held at East London Mosque. Today he is accompanied by carer Mohammed Saleh Chowdhury and Khaled Hassan, Dementia Support Worker, who runs the café for the local Bangladeshi community.

Abdus, now 70, was 17 when he came to the UK, and has raised a family and run numerous businesses since then. He is sharply aware of the impact that his dementia has had on him.

'I'm slowly losing everything I know. I forget my grandchildren's names.'

Abdus arrived in England back in 1963. A native speaker of Sylheti – a language spoken mostly in north east Bangladesh – he knew few people in the UK. However, he had a relative in Lancashire, and Abdus got a job at a cotton mill there, though the experience wasn't pleasant.

'They didn't pay very good money and it was noisy. You couldn't speak – you had to communicate using hand signals!'

Displaying a sense of ambition that would serve him well, Abdus secured a job at an electronics company with better pay. Here he worked on an assembly line, helping to make televisions.

'They were researching how to get black and white televisions to also show colour, but they were not successful.'

Abdus admits he 'didn't enjoy life so much' at that time, saying that many of the people around him were 'into gambling and womanising'.

'I could have gone in the wrong direction.'

However, he does recall two trips with friends to what was then Blackburn Greyhound Stadium.

A move to London via the Midlands and work on a Ford Motor Company assembly line meant more change for Abdus. When a friend suggested they start their own business together, they set up a trimming factory. After he sold the firm, Abdus was on the lookout for a new direction and hungry for a fresh challenge.

'I was unemployed for two years but asked a relative to tell me about any business opportunities to own a shop in a good area.

'So I started an off-licence in Victoria called Friends Supermarket, which by 1979 was taking £500–£600 a week. My daughter supported me – she helped with the evening shift after university.

'Our relationship with some of the customers was like a family and we slowly improved the business.'

This was despite fierce competition from a grocer across the road.

'He told his supplier that he wouldn't buy from them if they sold to us!'

His successes clearly form an important part of Abdus's identity, and he still owns a number of properties. However, he never sounds arrogant, instead coming across as rightfully proud of his achievements and hard work.

Abdus's three daughters and three sons are another great source of pride for him, and he is keen to talk about their accomplishments.

'At age five, my second daughter said she wanted to become a teacher. She now works as a head of geography. When we talked about her career she said, "I'm on a mission to teach – promotions mean less teaching and more office work."

'My older daughter is also a teacher. Her husband is a charity worker and has an MBE. He also wrote a book about Islam in the West.'

Four of their children were born in Bangladesh and two in the UK, and all were raised by Abdus and his wife in England.

Describing their cultural outlook, he says,

'They are not very westernised but they're also not very Asian in culture. They're in the middle.'

A less happy topic is Abdus's health, though he still discusses it frankly. He has had Parkinson's disease for 20 years, among other conditions, and uses a wheelchair to get around.

'My dementia is related to the Parkinson's. About 15 years after my Parkinson's diagnosis I was slowly losing my memory.'

Abdus is mindful of how his dementia has affected his sense of identity in recent years.

'I would read a lot of books, particularly geography books that my daughter bought me. I knew countries, capital cities, languages – I knew everything! I also talked about politics a lot, but now I can't because I forget. I forget the particular president of a country's name.'

Abdus enjoys the fortnightly Bangladeshi dementia café. Here, people with dementia and carers take part in activities such as reminiscence, arts and crafts, seated exercise and quizzes. Experts also visit to give talks about diet, diabetes, eye care, benefits and other useful subjects.

Abdus likes the café's atmosphere and the opportunity to share stories and experiences.

'We talk about our past. They ask me, "Where was your home in Bangladesh? What did you like about it?" And I ask them similar things back.'

'Some people in the Bangladeshi community think God gave me this disease. They don't think about the actual reasons behind it.'

As a man who places great importance on reputation and relationships, these attitudes must be extremely difficult for Abdus to deal with.

When asked about the support he receives from the government and health service, Abdus says they 'do what they can for you'. This also prompts a political discussion that belies his earlier lack of confidence about keeping up with current affairs.

Abdus's social conscience comes to the fore when he concludes,

'I believe that every human is born free and equal, with dignity and rights.'

Dementia may have affected his cherished knowledge of geography and politics, but Abdus retains a strong connection to his past and can still take pride in his achievements and those of his children.