From the May 2015 issue of our magazine, dancing, great for fitness and feeling good, can also benefit people with dementia. Heather Stephen found out about a dance programme that is bringing people together in Cumbria.

Terry Hall's dementia means that he no longer enjoys his old hobbies of reading and fell walking. However he has found a new lease of life by discovering the therapeutic effects of dance.

The retired post room worker, aged 71, attends weekly dance sessions at the Theatre by the Lake in Keswick as part of the dementia project, Dancing Recall. 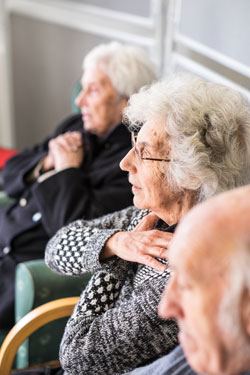 'Terry has had Alzheimer's for four years and can't really do many things now but this group is something we can both enjoy together.

'He loves all sorts of music from 50s pop to Pavarotti. We both like the friendly, relaxed atmosphere where we can sing and dance together and get out of the house doing something active.'

Although Terry doesn't remember the sessions afterwards they can still do him a lot of good. Apart from the enjoyment of the moment, exercise can improve wellbeing and mobility for people with dementia, along with the ability to carry out daily activities, concentration and responsiveness.

Dancing Recall was set up by Daphne Cushnie, a specialist physiotherapist and community dance practitioner, 18 months ago.

'I have always believed that dance could help people with degenerative conditions like dementia but for many years I was a voice in the wilderness.

'However over the years there has been a greater awareness that health and social care should be joined up.'

A release of funding through England's National Dementia Strategy and a 'more compassionate and person-centred approach to care' generated an opportunity for Daphne to create Dancing Recall.

A six-month pilot project began in September 2013 in six areas of Cumbria, involving eight weekly dance sessions for people with dementia and carers in local community and leisure centres.

Additional funding meant the project could start again in the Eden and Allerdale areas of Cumbria last October, running over two years.

Daphne says her clinical background gives her a particular understanding of dementia.

'As a neurological physiotherapist I have a deep understanding of dementia and the mental and physical effects of movement.

'That knowledge underpins every aspect of our sessions, making them safe and effective without detracting from fun and creativity.'

Community dance practitioner Susie Tate, who helps run the programme, says the sessions have multiple benefits for people who range in age from 50 to dancers in their 90s. Susie says,

'We work in a circle so we all make eye contact and start off dancing to something lively.

'Then we might do a routine to develop fine motor skills or use props like shakers, colourful parachutes or a giant scrunchy which we all pull and stretch and eventually make go ping!' 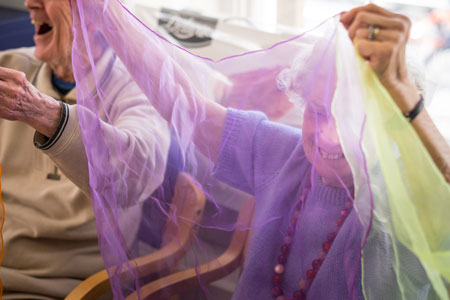 Susie says participants really enjoy singing along to the music and she says the effects often last far longer than the end of the session. She says,

'Catch a falling star, by Perry Como, is always a particular hit. And one care home worker told us that after a couple of residents danced to it at one of our sessions, the next time they heard it on the radio they leapt up and starting dancing away so it certainly had an effect on them.

'The group opens up so much for people. Doing things in unison gives people a sense of community and acceptance, and brings them together in a safe and welcoming environment.'

Mary Elliott, House Manager of Theatre by the Lake, says she was so impressed by Daphne and Susie's work that she offered the venue for free.

'It is a way of connecting people in a relaxed shared experience which is as much for the carers as people with dementia. People come along with their partners intending to watch and they end up joining in with the singing and dancing too.'

Daphne says the project's benefits have been more than she could have hoped for.

'Music has an amazing effect on the organising capacity of the brain. When you bring music and movement together in an environment which is rich and full of theatre the results are extraordinary.

'We have seen incredible focus in these sessions and fluidity of movement and even when people have dementia they are still able to learn new skills and be creative. And it just goes to show there is no barrier to improvement and learning.'

See our factsheets Exercise and physical activity for people with dementia and Staying involved and active or call 0300 303 5933 to order.